I am absolutely certain that generations from now, we will be able to look back and tell our children that this was the moment when the rise of the oceans began to slow and our planet began to heal

On Easter Sunday, I am reminded of the wondrous deeds of the left’s fallen savior. Fulfilling his prophecy of ten years ago. His work was seen everywhere in Philadelphia last week. Cherry trees are blooming later and later in Washington DC. Only Barack Obama himself knows when they will actually bloom this year, with two more snowstorms coming this week. I came down to DC this weekend to photograph the imaginary cherry blossoms, which the Park Service originally said would reach peak bloom on March 17.  No luck there, so we climbed up Sugarloaf Mountain instead. I think this might be Chuck Schumer or Nancy Pelosi, but I’m not certain. Now that the global HadCRUT4.6 dataset is available for February 2018, it is possible to examine a 4-year period for both El Niños, including the ‘pre’ and ‘post’ months for each.

These two major El Niño events do have some similarities as shown in their respective 4-year charts.

Besides the shared visual pattern of low-to-high-to-low similarity, the peak temperature for both periods came in the month of February (1998 & 2016).

And the end points displayed in the above charts are not dramatically different – there is only a +0.07°C gap between the higher February 2018 anomaly versus that of February 2000.

Regarding the differences between the two phenomenons:

There is a large difference for the peak month anomaly of the respective Februaries (1998 & 2016). Indeed, a visually striking difference is apparent.

With that said, when the anomalies for the 10-year period prior to February 1996 and February 2014 are compared, one finds that the later anomalies were, on average, +0.3°C higher than those of the earlier 10-year period.

This substantially larger per century warming rate for the earlier event analysis period – ending in February 2000 – is rather unexpected given the typical mainstream headlines leading up to this last major El Niño.

This week the media started entertaining the possibility of the company’s demise as it faced a rash of especially bad financial news and a deadly Model X crash.

Tesla’s Model 3 production woes are well-known, evidenced by the fact that it has taken this long to hit around 1,000 Model 3’s produced per week.

But things took a sinister turn in the markets (and the media) after Moody’s Investors Service downgraded Tesla’s debt on Tuesday, citing, among other things, “liquidity pressures due to its large negative free cash flow.”

That triggered concerns that Tesla could run out of money by the end of the year. And Tuesday afternoon the stock went south.

.
.
Fans of expensive, unreliable, part-time electricity that has to be replaced at short (or no) notice by other power sources should look away now.

South Australia is renowned as a renewable energy ‘superpower’: by some strange coincidence, it’s also renowned for having the highest retail power prices in the world.

Wind and sun worshippers keep telling us that by plugging into nature’s wonder fuels we’ll soon enjoy power at 1970s prices. Except that that mantra is part myth and part fantasy and, wherever you find endless seas of solar panels and windmills, power prices just keep on rocketing. In SA, wholesale power prices doubled in just 12 months: 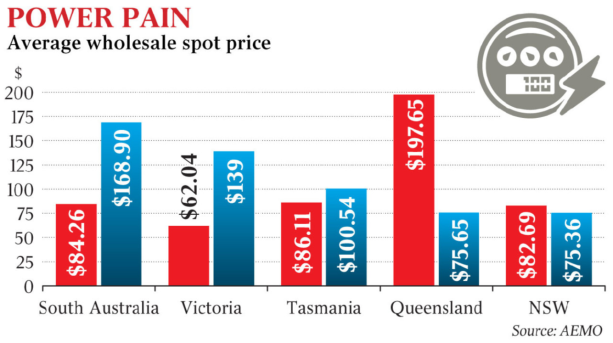 For power punters battered with crippling bills, predictions don’t count for much. But still renewables rent seekers keep pumping the line that, one day soon, power prices will plummet. Here’s Donn Dears spelling out precisely why they won’t.