According to The Guardian, climate change caused 200 reindeer to starve to death in Svalbard, though the scientists conducting the study think overpopulation might have been a factor.

Comparable death toll has been recorded only once before, says Norwegian Polar Institute

About 200 reindeer have been found dead from starvation in the Arctic archipelago Svalbard, an unusually high number, the Norwegian Polar Institute has said, pointing the finger at climate crisis.

Ashild Onvik Pedersen, the head of the census, said the high degree of mortality was a consequence of climate crisis, which according to climate scientists, is happening twice as fast in the Arctic as the rest of the world.

“Climate change is making it rain much more. The rain falls on the snow and forms a layer of ice on the tundra, making grazing conditions very poor for animals,” she said.

The increased mortality is also due in part to a significant increase in the number of reindeer in the Norwegian archipelago. That is partly thanks to climate crisis and the warmer summers, meaning more individuals compete in the same grazing areas.

I’m starting to see this more and more, scientists genuflect to the alleged climate crisis, but they seem to qualify their statement, to let the truth about what is really causing the problem peek through what they are saying about climate change.

The glitterati are descending on a ritzy Sicilian seaside resort to discuss how to save the world. As usual, a bit of wrecking-the-world on the way is fine if it’s “for a good cause” — meaning fame, status, and hot three day summer camps in an Italian resort.

It’s known as Google Camp – the place where famous VIP’s get some training and incentives not to stray off the Google Groupthink-Ranch:

The billionaire creators of Google have invited a who’s who of A-list names— including former President Barack Obama, Prince Harry, Leonardo DiCaprio and Katy Perry — to the Sicilian seaside for a mega-party they’ve dubbed Google Camp.

The three-day event will focus on fighting climate change — though it’s unknown how much time the attendees will spend discussing their own effect on the environment, such as the scores of private jets they arrived in and the mega yachts many have been staying on.

It’s only going to cost Google $20 million or so. It’s a small investment in their team of lobbyists for Big Government.

Small governments, after all, like to break up monopolies, encourage competition and cut […]

I’m not surprised. The EPA IG is corrupt. JunkScience.com readers will recall, for example, the EPA IG whitewash of EPA’s illegal human testing. BTW, who puts the conclusion in the title of an IG report? At Volvo’s instigation, EPA staff and Volvo conspired to do a bogus test of a Volvo-competitor’s glider trucks for the … Continue reading Dirty Deeds: EPA Inspector General Whitewashes Rogue Testing of Glider Trucks 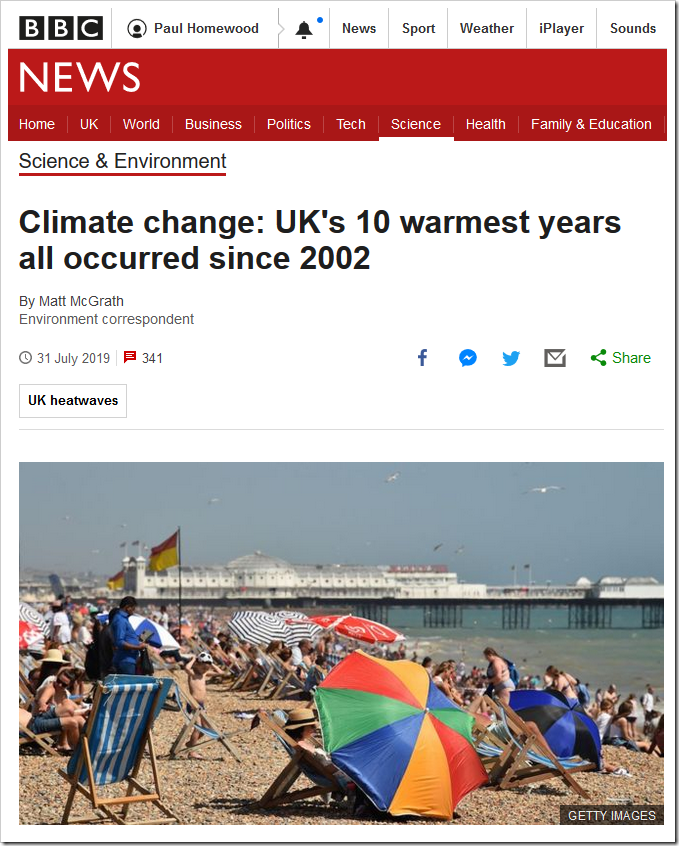 The top 10 warmest years on record in the UK have all occurred since 2002, a new analysis from the Met Office says.

Its State of the UK Climate report shows that 2014 remains the warmest year in a temperature sequence now dating back to 1884.

Despite last summer’s blistering heat, 2018 only places as the seventh warmest year on record – as the statistic is based on temperatures all year round.

The patterns of warm and cold years in Britain are a clear signal of climate change, say scientists.

It comes after the Met Office confirmed this week that the UK’s hottest temperature ever – 38.7C (101.7F) – was recorded on Thursday in Cambridge.

The Met Office scientist who compiled the new analysis says that the clustering of all the warmest years in the first two decades of the 21st Century is what would be expected in a changing climate.

"It’s certainly what we’d expect to see. Our climate in the UK has warmed at a very similar amount to the global temperature rise, so just under 1C for the UK," said Dr Mark McCarthy.

"Under that warming climate, we would expect that the hot extremes would tend to cluster in more recent times and the colder extremes are further back in time….

When it comes to rain, six of the 10 wettest years in the UK have occurred since 1998.

Over the last decade, our hot and cold seasons have been getting wetter than the long-term average with the summers seeing 13% more rain while the winters going up by 12%.

"It is also interesting that a high number of the wettest years in the UK occurred recently, showing that climate change starts to show up even in highly variable aspects of weather such as rainfall," said Prof Gabi Hegerl from the University of Edinburgh who wasn’t involved with the study.

"Climate change already matters to the UK and makes a difference."

I’m not quite sure why this is news to the BBC, because I reported it all back in January!

And I correctly predicted that the Met Office would make a big thing about the “ten warmest years, blah blah”.

For some reason, the Met Office and BBC are extremely reluctant to simply publish the graphs, and let people make their minds up.

If they were to do so, people would realise that the UK stopped warming up a decade or more ago:

Mark McCarthy claims that this is consistent with climate change:

"It’s certainly what we’d expect to see. Our climate in the UK has warmed at a very similar amount to the global temperature rise, so just under 1C for the UK," said Dr Mark McCarthy.

"Under that warming climate, we would expect that the hot extremes would tend to cluster in more recent times and the colder extremes are further back in time.

And Shukman is in no doubt: 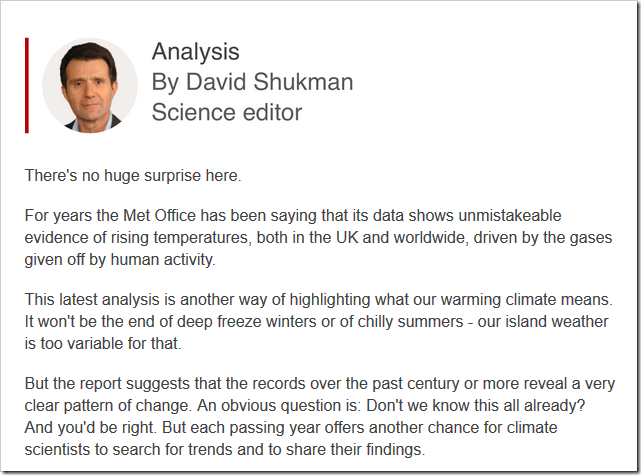 But it simply is not true. Climate change theory implies that the climate is continuing to get warmer. Instead, what we see is a step change mainly in the 1990s, and a flat trend since.

Understandably, neither the Met Office or BBC want to admit this!

Indeed the evidence from last year adds further weight to that flat trend. It was the 7th hottest since 2003, a period of 16 years, so slightly below the median.

Put simply, the UK temperature record offers no evidence that temperatures will significantly rise in years to come.

The claims about rainfall are also grossly misleading:

In reality, the extra rainfall mentioned is confined to Scotland, but in the rest of the UK there is little evidence of any significant trends.

While a wetter climate in Scotland may be due to climate change, it is dishonest of Hegerl to pretend that this is affecting the UK as a whole:

But worse still, the Met Office have the much longer England & Wales Precipitation Series, dating back to 1766, which shows a completely different picture.

We can see from this that the climate is no wetter than some other earlier periods. Notably, the 1870s were the wettest decade overall: 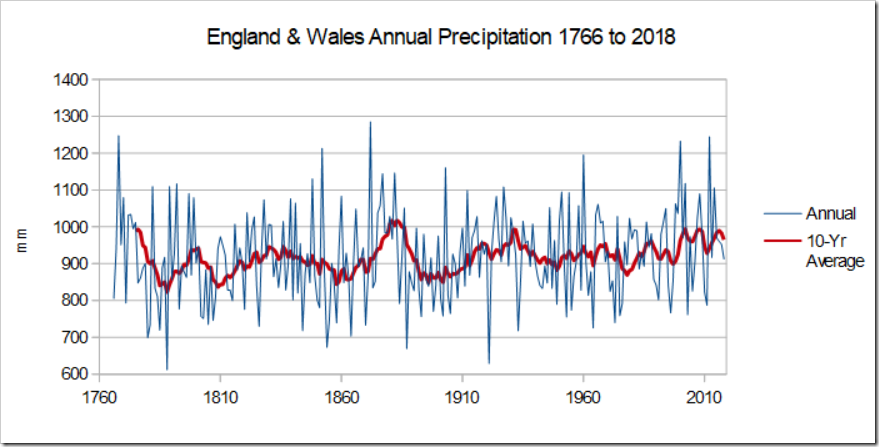 I am, by the way, amused at their claim that wetter summers are the result of climate change. For years, the Met Office have been claiming that global warming would make our summers drier.

Perhaps somebody should tell the Environment Agency, who only a few weeks ago were warning of water shortages!