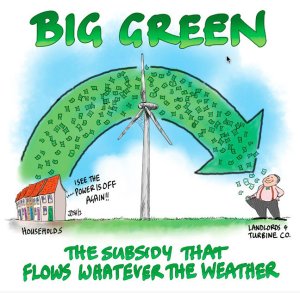 H/T The GWPF
Same old story, but numbers keep getting bigger. This just reinforces the point that large-scale surplus electricity can’t be stored. But nobody pays non-renewable sources for switching off or reducing output when wind and/or solar are operating at or near their capacity.
– – –
Wind farms were paid up to £3 million per day to switch off their turbines and not produce electricity last week, The Telegraph can disclose.

Energy firms were handed more than £12 million in compensation following a fault with a major power line carrying electricity to England from turbines in Scotland.

The payouts, which will ultimately be added onto consumer bills, were between 25 per cent and 80 per cent more than the firms, which own giant wind farms in Scotland, would have received had they been producing electricity, according to an analysis of official figures.

The payments have prompted questions in Parliament, as one charity warned that consumers were having to fund the consequences of an “excessive” number of onshore wind farms, which can overwhelm the electricity grid.

In December an analysis by the Renewable Energy Foundation, a charity that monitors energy use, revealed that the operators of 86 wind farms in Britain were handed more than £136 million in so-called “constraint payments” last year – a new record.

REF has warned that consumers are left to foot the bill for wind farm operators having to reduce their output as a result of an “excessive” number of turbines in Scotland leaving the electricity grid unable to cope on occasions such as when there are strong winds.

The Western Link, a 530-mile high-voltage cable running from the west coast of Scotland to the north coast of Wales, was built to help overcome the problem by providing more capacity to transport green energy from onshore wind farms in Scotland, to England and Wales.

But the line, which became fully operational in 2018, has been dogged by difficulties.

In the latest incident, it “tripped” on Jan 10, prompting a spike in the number of wind farms being asked to shut down temporarily because they were producing more energy than could be transported to consumers’ homes.

One thought on “Green Madness: Wind Farms Paid Up To £3 Million Per Day To Switch Off Turbines ”