Geologist Dr. Sebastian Lüning just released a video that challenges the  claim that today’s warming is unusual and caused mostly by human activities.

While the video’s main focus is on Germany, it presents several key points that tell us why natural factors are just as much at play, if not more.

And because the warming effect of CO2 is one that occurs gradually over the long term, there has to be another reason for the abrupt rise.  The video shows how the rise of North and Baltic sea surface temperature is linked to the North Atlantic Oscillation (NAO), which reached a peak in the early 1990s:

“The NAO is an important controller of precipitation and temperature in Europe,” the video explains, and it is in part impacted by solar activity.

Also weather data recorded on Germany’s tallest peak, Zugspitze, show there are far fewer clouds today than earlier. The number of hours of sunshine has gone up close to 400 hours a year since 1900: 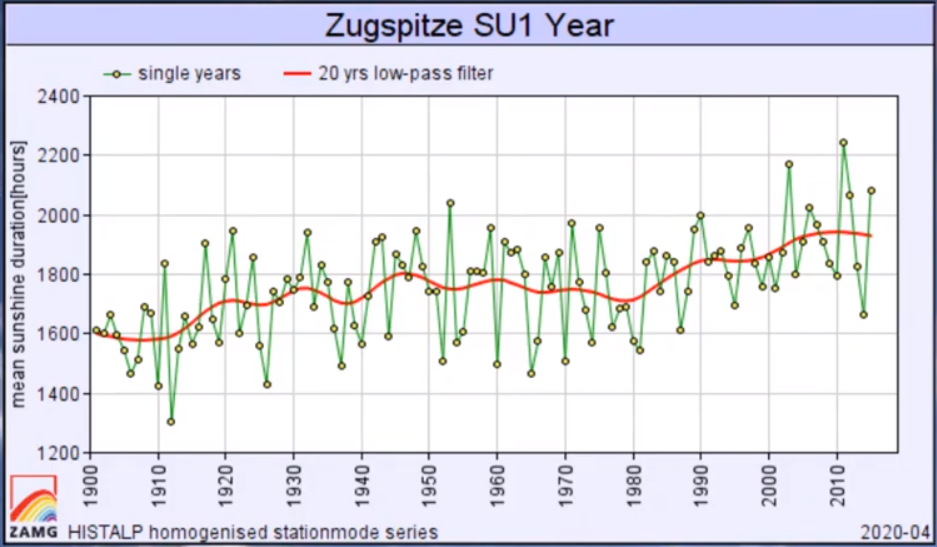 A third point is the Medieval warm Period (MWP).  In Europe the temperature rose almost 5°C from the year 700 AD to the peak of the MWP in the year 1000 AD.

“Within a matter of decades, the temperature rapidly rose naturally several degrees,” the video says. “Thus neither today’s temperature level nor the rate of rise in Germany are unprecedented in a historical context.”

The video then points out a temperature reconstruction (Brunner 2004) from sediments from Lake Constance which reveals the lake froze over very rarely between 900 and 1200 AD.  But then the lake froze over far more often, especially during the 14th and 15th centuries:

Today the lake freezes over similarly often as 1000 years ago.

The large climate variability seen over Europe over the past is also confirmed by proxy data taken from stalactites in a German cave (Fohlmeister, 2012).

Other studies confirm that temperatures were 1°C warmer 8000 years ago, the video shows.