There are many articles on the Californian rolling blackouts, but this one goes to the heart:

You may have read in the past few days that residents of California have been experiencing rolling power blackouts. This has occurred in the middle of a strong heat wave, meaning that large numbers of people have had their air conditioning, light, refrigeration, and everything else dependent on electricity, go out just when they are most needed. The blackouts have not been the result of technical failures of the grid, but rather have been intentionally imposed by the electricity system operator (known as CAISO — California Independent System Operator) via the various local utilities.

So what has caused these blackouts? The official explanation is that the heat wave is the cause. It has just gotten so unusually hot that demand has risen beyond the capacity of the system. Many articles in the media reporting on the situation go further to associate the unusual heat with “climate change.”

This explanation is complete BS. Yes, there is a strong heat wave going on, at least in certain areas of the state, but it is not unusual in historical context. In fact what is occurring is that California has begun to face the consequences of replacing reliable fossil fuel and nuclear powered electricity with the intermittent renewables, wind and solar. In the evening, approximately 7 to 9 PM, when the sun has set and the heat lingers, and when the demand for electricity for air conditioning reaches a peak, the intermittent wind and solar sources have been producing just about nothing. With insufficient fossil fuel backup, there is not enough power to meet the demand.

In short, we are witnessing the results of almost unbelievable incompetence by the authorities in California. As usual, the equally incompetent and corrupt media are completely giving the authorities a pass in the name of supposedly addressing “climate change.”

So with temperatures at or above the current levels a regularly recurring phenomenon, why haven’t the authorities planned accordingly and put in place resources to meet the demand? The answer is that under a law enacted in 2018, California has embarked on a crazed program to generate 50% of its electricity from “renewable” sources by 2025, 60% by 2030, and 100% by 2045. Both before and after enactment of that law, California has been ambitiously expanding its capacity for wind and solar generation of electricity.

To put this in some context, the peak electricity demand that has been causing California’s problems during the current heat wave is in the range of 42 – 46 GW. (Today’s peak demand was about 44 GW.) To meet this demand, you could put in place a system of fossil fuel and nuclear plants with a capacity of around 55 GW, which would give you a comfortable cushion to deal with whatever maintenance issues or mishaps might arise.

According to the U.S. government’s Energy Information Agency, California actually has installed electricity generation capacity of almost 76 GW. That sounds like wildly more than you would ever need. But the problem is that of the 76 GW of capacity, some 27 GW is solar, and 6 GW is wind. In August the solar goes into steep decline around 4 PM and ends completely around 7 PM. The wind more or less doesn’t blow at all during heat waves. And thus you get a profile of electricity generation from the renewable sources that looks like this.

The chart referred to is this:

It is self evident that it is absolutely impossible to manage a grid properly, if renewables account for a large proportion of capacity. Incidentally, solar accounts makes up about 80% of the renewables chunk.

At that crucial early evening period yesterday, natural gas was running at around 24 GW, about half of total demand. Imports and nuclear added another 6 GW and 2 GW respectively. 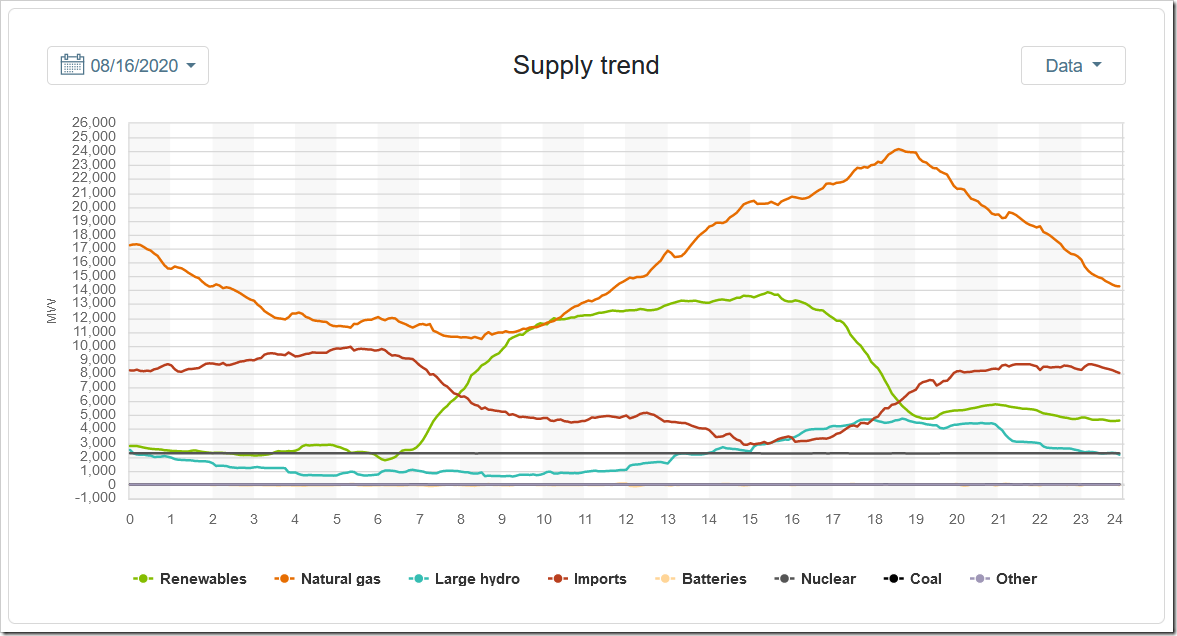 Yet California’s only nuclear plant, Diablo Canyon, is closing in 2025, thanks to political pressure. And how much longer can California rely on other states sending surplus power to the State. given they too may have to be more reliant on renewables?

The author, Francis Menton reckons that California only currently has 43 GW of capacity excluding wind and solar, leaving 41 GW after Diablo goes. This is maximum nameplate capacity. In reality, of course, it is not feasible to expect 100% efficiency, that number can probably be de-rated to 35 GW.

In the last ten years, gas and nuclear capacity has shrunk by 5 GW, which has made all the difference in this latest episode. California needs to quickly start building at least 10 GW of new gas-fired capacity, and ensure that no more existing capacity shuts because of the financial impact of low utilisation.