This latest report from the BBC shows just how out of touch with reality they really are: 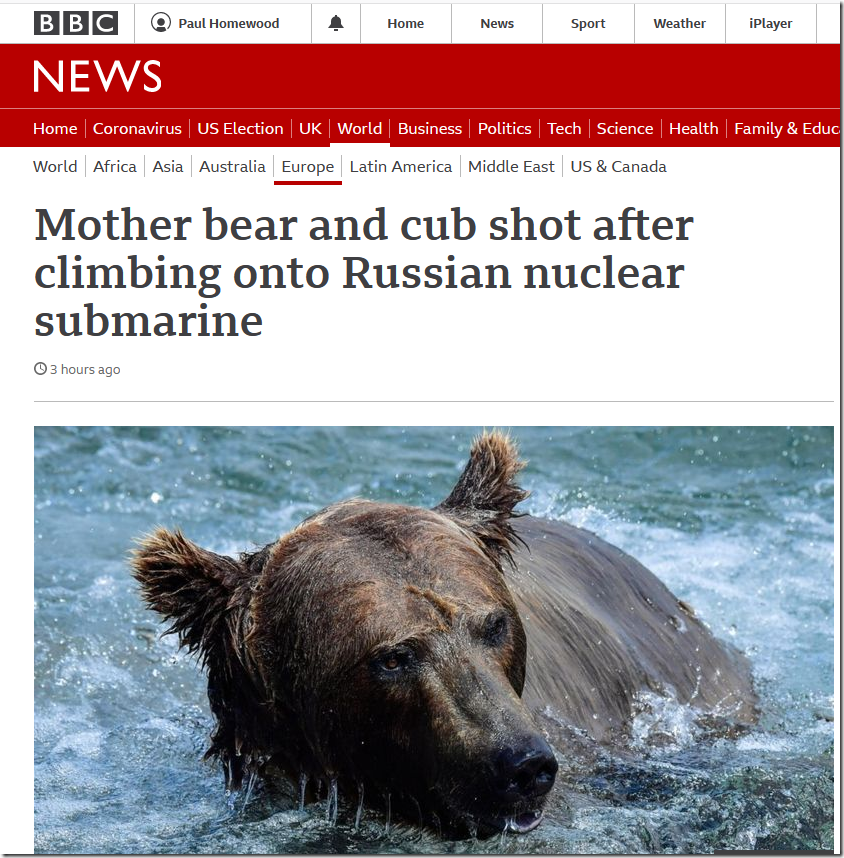 The Russian Navy has defended the shooting of a mother bear and its cub on a nuclear submarine following outrage among many social media users.

The navy says there was no other option after the animals climbed onto the vessel moored off the Vilyuchinsk base in the far-eastern Kamchatka region.

It says a hunting instructor was called in to "neutralise the wild animals".

Hundreds of social media users accused the navy of unnecessary cruelty after seeing a video of the shooting online.

"Animals!" and "The whole essence of Russia in one video" were some of the comments.

The footage was published on 8 November, although it is unclear when the shooting happened.

In the video, one of the animals is seen falling into the water after apparently being hit by a bullet.

A male voice in the video is heard saying the animals would have gone to local villages had they been driven away.

The bears, whose species was not disclosed, are believed to have swum across the bay to get onto the submarine for reasons unknown.

The Kamchatka peninsula is home to about 24,000 bears that can frequently be seen on local beaches.

My first question is just what relevance do “social media users” have to do with any of this?

What on earth do a handful of western, liberal do gooders know about the real world in Siberia. Maybe one of them could please tell me?

In the real world, of course, bears are not friendly Yogi and Boo Boo types. They eat people.

It is evident that brown bears, along with their white cousins, are more than abundant since our forefathers stopped shooting so many. So there is no concern about wiping out the species. On the contrary, bears are at the top of the feeding chain, and will carry on coming into conflict with humans, thus threatening local populations unless they are dealt with.

Would the wallies at the BBC rather see innocent Russian villagers killed, just to save a few bears?

They seem to have the attitude that the bears should be allowed to run free in their natural habitat, without interference from humans. Maybe someone should remind them that bears, wolves and sabre tooth tigers used to run free in Britain not too long ago as well!!