Hence, China has built more coal-fired power capacity in the last decade than any other country on earth. Upsetting the narrative of those wedded to the idea that renewables are not only the future, but that wind and solar are the only future in town.

In an effort to punish a petulant Australia for having the temerity to demand a proper enquiry into the origins of the coronavirus, China has slammed an outright ban on Australian coal imports, with some 70 ships loaded with the black stuff lurking off the Chinese coast in the hope they might get a chance to unload their cargoes. The ban quickly backfired: blackouts (see above) and power shortages soon followed, as generators scrambled to find sufficient local coal supplies to fill the gap.

From the figures touted below, it won’t take long before China has to back down and take as much Australian coal as we can dig up and deliver. Otherwise, it’s going to have a very hard time keeping the fuel up to the hundreds of new plants that are already under construction. Much to the horror of the weather-worriers in the Western mainstream press, as appears from this Reuters article.

SHANGHAI – China put 38.4 gigawatts (GW) of new coal-fired power capacity into operation in 2020, according to new international research, more than three times the amount built elsewhere around the world and potentially undermining its short-term climate goals.

The country won praise last year after President Xi Jinping pledged to make the country “carbon neutral” by 2060. But regulators have since come under fire for failing to properly control the coal power sector, a major source of climate-warming greenhouse gas.

Including decommissions, China’s coal-fired fleet capacity rose by a net 29.8 GW in 2020, even as the rest of the world made cuts of 17.2 GW, according to research released on Wednesday by Global Energy Monitor (GEM), a U.S. think tank, and the Helsinki-based Centre for Research on Energy and Clean Air (CREA).

China approved the construction of a further 36.9 GW of coal-fired capacity last year, three times more than a year earlier, bringing the total under construction to 88.1 GW. It now has 247 GW of coal power under development, enough to supply the whole of Germany.

A team of central government environmental inspectors delivered a scathing assessment of China’s energy regulator last Friday, accusing officials of planning failures and focusing too much on guaranteeing energy supply.

The NEA had allowed plants to be built in already polluted regions, while projects in less sensitive “coal-power bases” had not gone ahead, they said.

China has been criticized for pursuing an energy-intensive post-COVID recovery based on heavy industry and construction, and experts say new coal plants could end up becoming heavily-indebted “stranded assets.”
VOA News 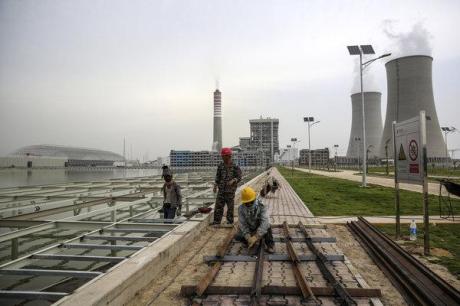 One thought on “Full Throttle: No End In Sight for China’s Mammoth Coal-Fired Power Rush”