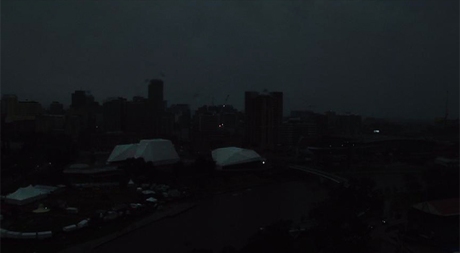 There’s a wind & solar ‘powered’ city in there somewhere!

By no stretch of the imagination can entirely weather/sunshine-dependent power sources be described as “meaningful” or “serious”.

The tale about the naked Emperor beguiled by his acolytes into believing his ‘attire’ was perfectly suited to every occasion, springs to mind. The gag was, of course, that the Emperor never had any clothes. Likewise, chaotically intermittent wind and solar were never really meant to exist as serious power generation sources, either.

What’s panned out in renewables obsessed territories like the economic backwater that is South Australia, California, Germany and Texas is the inevitable consequence of letting wishful ideology trump sound engineering, common sense and reason.

STT has been laying it out on this site since December 2012.

In the last few months, with the renewable energy debacles in Germany and Texas becoming increasingly hard to cover up, our message seems to be finally gaining the traction it deserves. Albeit, too late for many.

The problem for wind and solar propagandists is that they can’t have it both ways.

When the sun’s up and the wind’s blowing, they’re very keen to crow about how advanced we are on the path towards our ‘inevitable transition’ to an all wind and sun powered future.

They loudly pronounce that “coal is dead”, nuclear is going nowhere, gas is history and that wind and solar have proven themselves as perfect substitutes for all of the foregoing.

But, when solar panels are plastered inches deep in snow and ice, wind turbines are frozen solid and breathless, frigid weather means neither of them are producing very much power, at all, the narrative necessarily shifts. The same goes for breathless 42°C days.

It’s a bit like the gambler eager to tell you about his last big win, but who runs silent when it comes to the 10 losses he suffered, in a row. Sins of omission, and all that.

STT, however, is like the bookie who never forgets.

In that same vein, Rupert Darwall provides a reminder of some of their more spectacular failures in the timely and pointed article below.

South Australia in 2016; California last year; now, Texas. The recent blackout is a terrible ordeal for Texans but a political disaster for the Biden administration. The president had just signed an executive order making climate change the organizing principle of his administration. All coal and natural gas power stations are to be taken off the grid by 2035. To solve the climate crisis, America is to be powered almost exclusively by wind and solar, with a smattering of nuclear and hydropower.

As temperatures across Texas plunged, demand for heating surged. At 4 p.m. on February 14, Texas, with the most installed wind capacity of any state, was producing 9,101 megawatts (MW) of power. By 8 p.m. the following day, wind output was just 649 MW, a fall of 92.9%. Nuclear, coal, and gas generation fell too, but the wind drop-off was the largest in absolute terms and, with the exception of solar, in relative terms as well. As shown in the table, the drop in wind output accounted for 41.5% of the total fall.

It doesn’t take a genius to figure out that increasing dependence on weather-dependent, weather-exposed power generation is a formula for grid unreliability and blackouts. As analysts at Life:Powered point out,, since 2015, Texas has been relying entirely on wind and solar to meet demand growth and now has less gas and coal generation than five years ago. The catastrophic system failure this month was a disaster waiting to happen. The greater the reliance on wind, the more devastating will be the consequences of the weather not being right when demand surges.

Microsoft founder Bill Gates argues that the solution is to weatherize wind turbines against the cold and to connect the Texas grid to the rest of the nation. But weatherizing wind turbines doesn’t make the wind blow when there isn’t any. Grid interconnectors are a sensible way for neighboring systems to trade electricity with one another, but they can also be used by countries with large amounts of wind and solar, such as Germany, to dump their balancing problems onto their neighbors. In response, Poland, the Czech Republic, and the Netherlands have phase-shifting transformers to control unwanted power surges from Germany.

Interconnectors are no lifeline during times of acute grid stress. Like Texas, the state of South Australia relies heavily on wind power. In September 2016, a severe storm knocked out some transmission towers and forced six wind farms to curtail their output. The interconnector with neighboring Victoria was already over its safety limit. Within seconds it tripped, and much of the state was plunged into darkness.

The ability of the grid to cope with sudden supply-demand imbalances and maintain frequency is determined by the inertia in the system. Grid managers must also keep grid frequency within tight limits. The 600-ton turbines of coal-fired power stations spin at 3,000 rpm, generating synchronous power and providing system inertia. Think of it as maintaining balance on a moving bicycle. It comes naturally. Now imagine Bill Gates trying to balance on a stationary bicycle without his feet touching the ground – that’s wind and solar. They are non-synchronous, as are interconnectors, with low-to-zero physical inertia.

Having lots of renewable capacity makes for a less stable grid. It doesn’t take exceptional weather to cause blackouts. In August 2019, large parts of southern England saw their power cut off during a period when a record 67% of electricity demand was being met by wind. A sudden loss of generating capacity, thought to be caused by a lightning strike, was followed by a sharp drop in grid frequency that led grid managers to initiate a cascade of disconnections to restore grid stability.

Britain provides a textbook example of decarbonizing the grid and the distortions caused by renewable energy subsidies. Wind and solar have high fixed costs but close to zero variable costs, as the energy inputs from wind and sun are “free.” That means coal and gas can’t compete when the wind is blowing and the sun is shining. In the four years before 2016, the economically destructive effect of subsidizing zero-marginal-cost output saw Britain’s Big Six energy companies rack up cumulative losses of £2,096.4m ($2,945.4m) from their coal- and gas-fired power stations.

These losses led them to run down their thermal assets, and three of the Big Six exited thermal generation altogether. In the next three years, losses narrowed to £22.6m ($31.7m). Over the same period, the Big Six’s renewable portfolio generated profits of £2,782.0m ($3,897.6m), despite generating less than one-third of the electricity compared to the output of their coal and gas power stations. In 2019, the Big Six obtained an average wholesale price of £116.64 ($163.41) per megawatt hour (MWh) for renewable electricity – 58% more than the £73.58 ($103.09) per MWh they received for electricity generated by their thermal-power stations, which are critical for keeping the lights on and the grid stable. Consumers bore the burden of the renewable subsidies. In those three years, Big Six residential customers saw the average price of electricity rise by 27.7%, to 18.08p (25.33 cents) per kilowatt hour (kWh), leading them to cut their electricity consumption by 12.1%.

Gates and others blame the Texas blackout on the failure of power-station owners to weatherize their plants. But these owners have little incentive to invest in their plants when faced with falling load factors brought about by the growth of wind output – and now with an administration that wants to push them off the grid altogether. Some climate scientists see the Texas freeze as evidence of climate change, as does the president’s climate envoy John Kerry. If man-made climate change is predicted to cause more extreme weather, then it is perverse to increase the vulnerability of the electrical grid to severe weather and make the amount of electricity available at any given moment even more dependent on changing weather conditions.

Texans would be better off if the state had no investment in wind power; its grid would be more resilient, and investment in thermal generation plants would have been stronger. Instead, the Biden administration’s decision to rejoin the Paris climate agreement is a prelude to more draconian climate policies than envisaged under the Obama administration’s Clean Power Plan. Although the Paris Agreement speaks of achieving net zero “in the second half of this century,” the Biden administration is bringing forward the net zero deadline to 2050 – vastly increasing the speed, cost, and disruption of decarbonization.

The preamble of the Paris Agreement contains a much-overlooked recital that provides context on how the agreement should be interpreted – recognizing, it says, “that parties may be affected not only by climate change, but also by the impacts of the measures taken in response to it.” Scientists are divided as to whether Texans are suffering from the effects of man-made climate change. But there can be little doubt that they are suffering from the destructive effects of climate change policies. Republicans should require the Biden administration to demonstrate the cure is less harmful than the disease. Texas is a warning.
Real Clear Energy 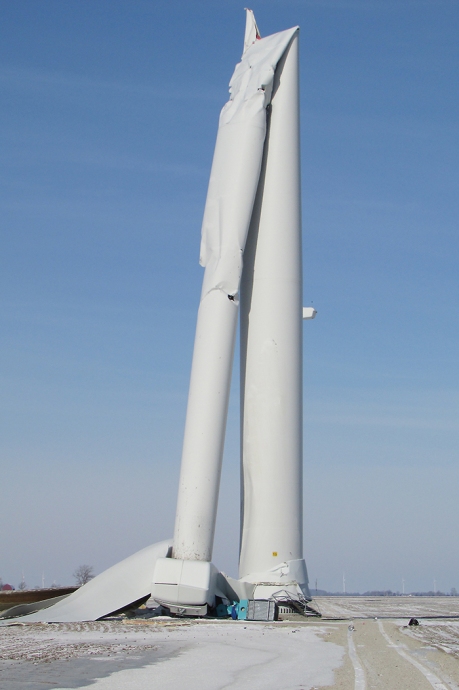 Wind power: proven to be a dangerous and total flop.