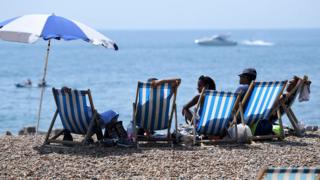 The Sun is more than capable of regulating itself. Attempts by humans to interfere with its effects are by definition ill-conceived. No trend in Arctic summer sea ice data since the early 2000s, for example, despite so-called experts claiming it was doomed several years ago, so who needs any intervention?
– – –
Nine of the hottest years in human history [Talkshop comment – meaning since 1979, when satellite data became moderately reliable] have occurred in the last decade.

Without a major shift in this climate trajectory, the future of life on Earth is in question, claims Phys.org.

Should humans, whose fossil-fueled society is driving climate change [Talkshop comment – evidence-free assertion], use technology to put the brakes on global warming?

Every month since September 2019 the Climate Intervention Biology Working Group, a team of internationally recognized experts in climate science and ecology, has gathered remotely to bring science to bear on that question and the consequences of geoengineering a cooler Earth by reflecting a portion of the sun’s radiation away from the planet — a climate intervention strategy known as solar radiation modification (SRM).

The group’s seminal paper, “Potential ecological impacts of climate intervention by reflecting sunlight to cool Earth,” was published in the most recent Proceedings of the National Academy of Sciences (PNAS).

“Participating in this working group has been quite eye-opening for me,” said co-author Peter Groffman, an ecosystem ecologist at the Advanced Science Research Center at The Graduate Center, CUNY and the Cary Institute of Ecosystem Studies. “I was unaware that modeling climate intervention was so advanced, and I think that climate modelers were unaware of the complexities of the ecological systems being affected. It is a strong reminder of the importance of the need for multi-disciplinary analysis of complex problems in environmental science.”
. . .
The costs and technology needed to reflect the Sun’s heat back into space are currently more attainable than other climate intervention ideas like absorbing carbon dioxide (CO2) from the air.

The working group anticipates their lively discussions and open access paper will encourage an explosion of scientific investigation into how a climate intervention strategy known as solar radiation modification (SRM), in tandem with greenhouse gas emissions reduction, would affect the natural world.