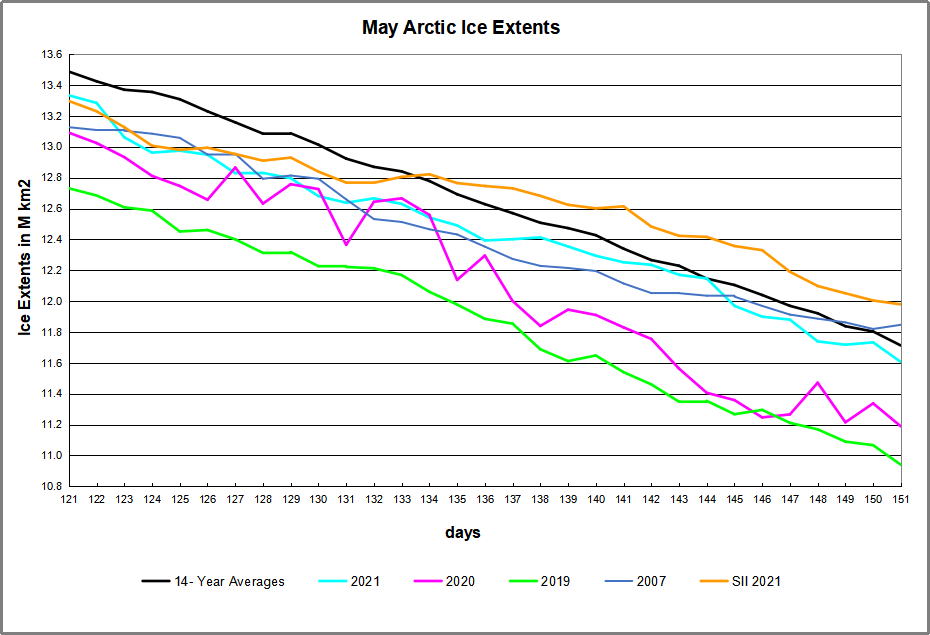 A previous post reported that Arctic Sea Ice has persisted this year despite a wavy Polar Vortex this spring, bringing cold down to mid-latitudes, and warming air into Arctic regions.  Now in May, the sea ice extent matches the 14-year average.  In the chart above, MASIE has caught up to its average, while SII (Sea Ice Index) is showing 300k km2 more ice.  This is also 200k km2 higher than the 14-year average for SII on day 144 (not shown in chart).

Why is this important?  All the claims of global climate emergency depend on dangerously higher temperatures, lower sea ice, and rising sea levels.  The lack of additional warming is documented in a post Adios, Global Warming

The lack of acceleration in sea levels along coastlines has been discussed also.  See USCS Warnings of Coastal Floodings

The table below shows the distribution of Sea Ice across the Arctic Regions, on average, this year and 2007.

The overall deficit to average happened yesterday, being an extent 1% lower, and two days earlier than average.  The largest deficits to average are in Baffin Bay and Laptev Sea, along with Bering and Okhotsk.  These are partly offset by surpluses elsewhere, mostly in Beaufort, Chukchi, and Greenland Seas.