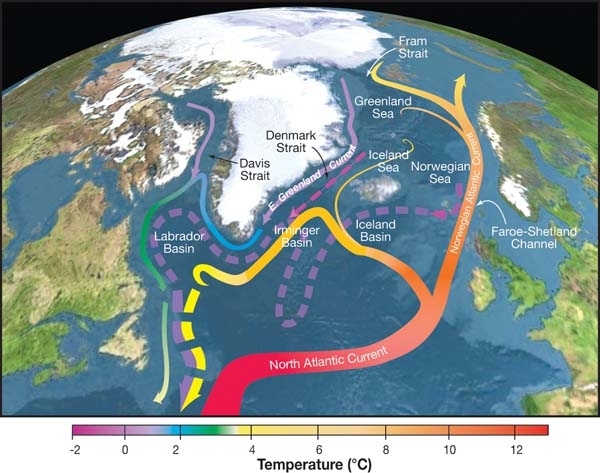 Widely differing climate models are supposed to be a reliable guide to the future? Clearly not. Here the uncertainty gets investigated, and pinned on a phenomenon that was recently claimed by Mann et al not to exist. Of course all these models make the assumption that carbon dioxide at a tiny 0.04% of the atmosphere is a key variable of concern, despite all the other variability in the climate system that they have to wrestle with.
– – –
Thirty state-of-the-art IPCC-climate models predict dramatically different climates for the Northern Hemisphere, especially Europe, says Phys.org.

An analysis of the range of responses now reveals that the differences are mostly down to the individual model’s simulations of changes to the North Atlantic ocean currents and not only—as normally assumed—atmospheric changes.

The work, by Katinka Bellomo, National Research Council of Italy, Institute of Atmospheric Sciences and Climate, and colleagues is published today in Nature Communications and is part of the European science collaboration, TiPES, coordinated by the University of Copenhagen.

All climate models vary in the details. Variables such as atmospheric pressure, cloud cover, temperature gradients, sea surface temperatures, and many more are tuned to interact slightly differently for every model. This means that the predictions of the many models also vary.

International modeling centers run a coordinated set of climate model simulations, which are then assessed by the IPCC and summarized in a balanced report. But naturally, an uncertainty remains, reflecting the many different tunings of models.

“We want to understand the differences among these models. Why does one model project an overall global temperature change of two degrees while another one of four degrees? Our objective is to narrow down this inter-model uncertainty. We also want to understand the differences in these models in terms of regional climate change,” explains Dr. Katinka Bellomo.

Bellomo and colleagues analyzed simulations from 30 climate models and found an important difference.

There is disagreement among the models on the rate of the decline in the Atlantic meridional overturning circulation (AMOC), a large system of ocean currents in the North Atlantic which overturns surface water to a deep ocean current and plays a crucial role in the distribution of heat from the tropics to the Northern Hemisphere.

“To see how this difference was reflected in projections of the future climate, we grouped together the top 10 models (from a total of 30) in which the AMOC decline is smaller. We then compared the group with the average of the 10 models that have the largest decline,” explains Bellomo.

The analysis revealed two distinct types of climate scenarios. In models where the AMOC decline is large, Europe warms only slightly, but wind patterns in Europe and precipitation patterns in the tropics change dramatically.

However, in models where the AMOC decline is smaller, the Northern hemisphere heats up considerably, and a well-known pattern emerges in which wet regions get wetter and dry get dryer.

This means that the uncertainties in predictions of the future climate may to a large degree depend on how climate models predict changes in the overturning circulation in the North Atlantic.

Thus, the result challenges the previous understanding of mechanisms controlling climate change over the North Atlantic, in which parameterizations of the atmosphere have been suspected to cause the main part of the uncertainty.

“This is important, because it points to the AMOC as one of the largest sources of uncertainties in climate prediction,” says Katinka Bellomo.