A global-scale analysis of 221 islands in the tropical Pacific and Indian Oceans reveals “a predominantly stable or accretionary trend in the area of atoll islands worldwide” throughout the 21st century. The Maldives islands alone expanded by 37.5 km² from 2000 to 2017.

For over 3 decades we’ve been warned “entire nations could be wiped off the face of the Earth by rising sea levels if the global warming trend is not reversed.”

But reality keeps on undermining this catastrophist narrative.

And now a new analysis of post-2000 trends also indicates global-scale stable to expanding shorelines for hundreds of Pacific and Indian Ocean islands, with over half of the net growth (39 km² of 62 km²) occurring from 2013 to 2017. 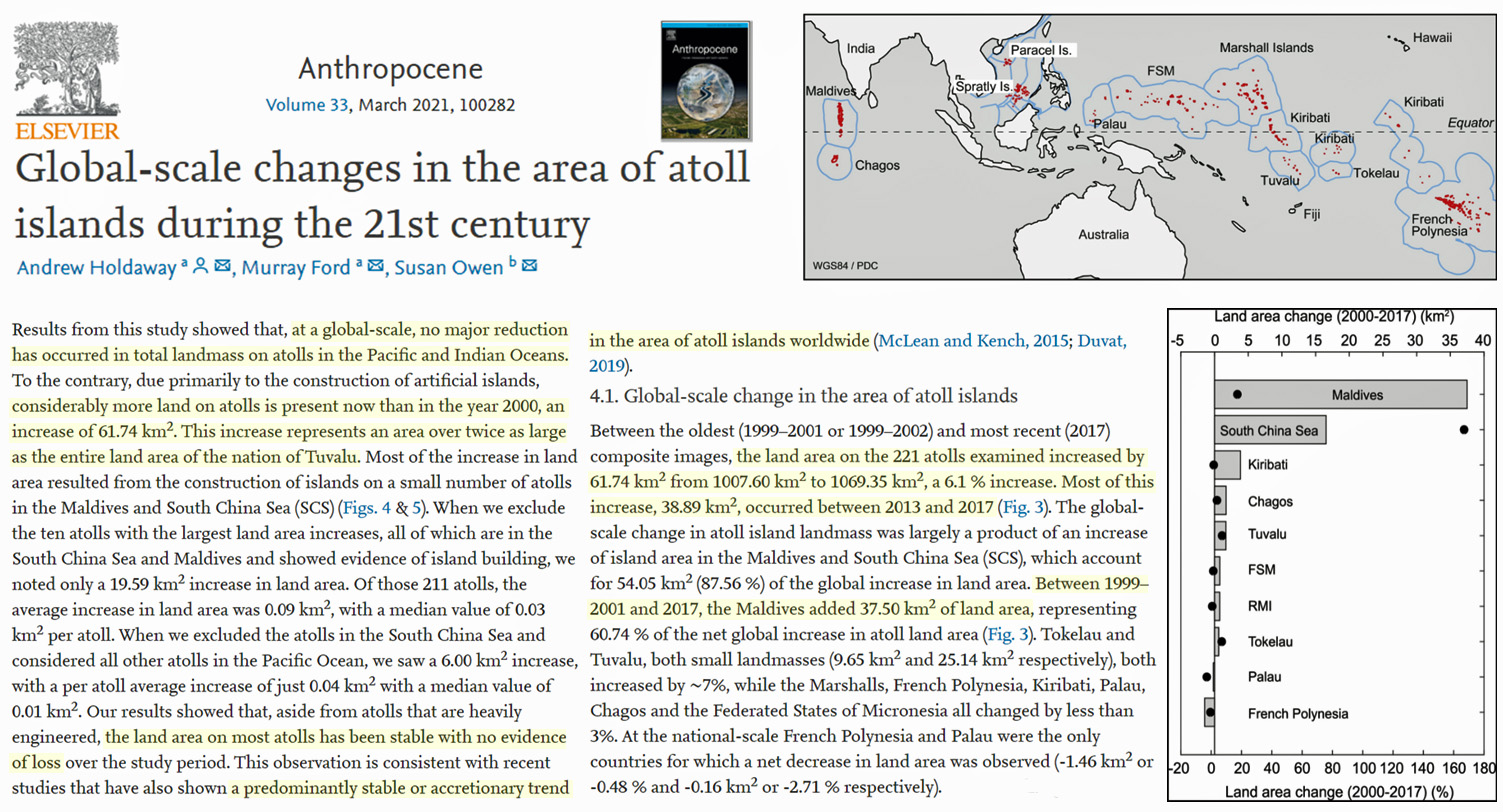 Two other separately-published studies by a team of scientists  (Sengupta et al., 2021 and Sengupta et al., 2021) use aerial photographs dating to the 1940s (and 1960s and 1970s) of 104 and 71 reef islands in the equatorial Pacific (Micronesia, Gilbert Islands) to compare shoreline changes over time.

Once again, none of these studies support claims of catastrophic sea level rise engulfing island coasts as a consequence of global warming.

“This study presents an analysis of shoreline changes on 104 coral reef islands from 16 atolls in the western equatorial Pacific nation of the Federated States of Micronesia across a period coincident with rising local sea level and a high frequency of storm events. Aerial photographs from the mid-1940s and 1970s were analysed alongside recent high-resolution satellite imagery to document shoreline changes and planform morphological adjustments in islands. Results revealed accretion has been the predominant mode of shoreline change, with 46% of the studied shorelines showing statistically significant accretion leading to a net increase of 64.37 ha (~3%) of planform land area across the archipelago.” 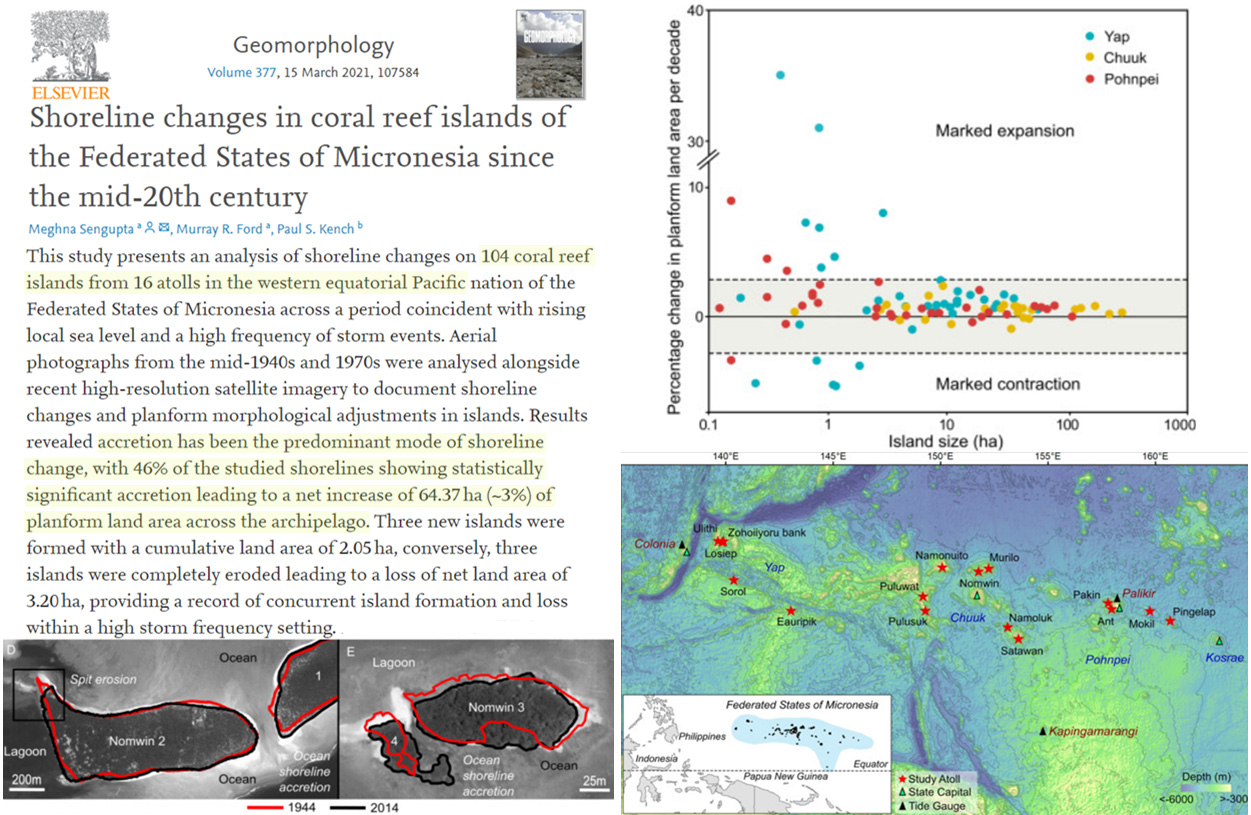 “Shoreline positions of 71 islands from 3 atolls and 4 mid-ocean reef platforms were analysed by comparing historical aerial photographs (from 1940s and 1960s) and recent satellite imagery covering a period of local sea-level rise rate of ~2.2 mm/year. Results show ~47% of the shorelines were characterised by statistically significant accretion leading to a net increase of 274.07 ha (2.45%) of planform land area.” 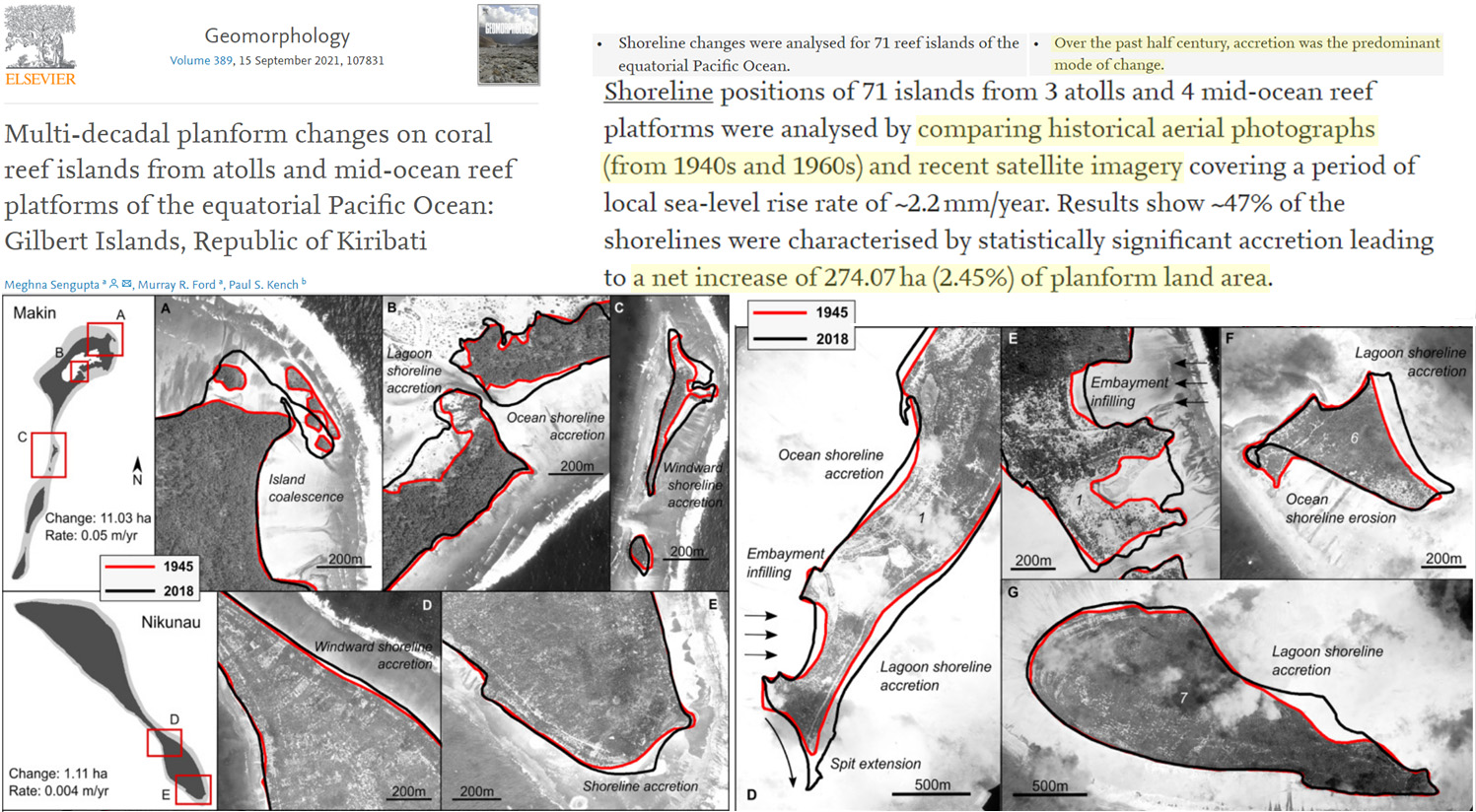