The COP 26 organizers must be quaking in their chardonnay. Just when they need all the usual hyped up wind powered record headlines, they’re getting headlines of record gas prices, rocketing inflation, and industries thinking about shutting down.

Welcome to the Green Revolution: 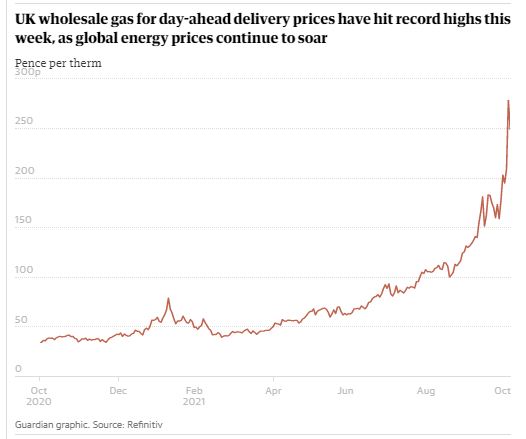 Wholesale gas prices hit new all-time highs on Wednesday, prompting warnings that factories could be forced to shut down over winter or switch to more polluting fuels just as the UK hosts the Cop26 climate conference next month.

Trade body UK Steel said it was now “uneconomic” to make steel at certain times in the UK, with British firms facing double the electricity prices paid by rivals in Germany, France and the Netherlands.

Don’t say “oil” say “polluting fuels that had been abandoned”:

Paul Pearcy, the federation coordinator at the trade body British Glass, said companies that make windows could be forced to revert to powering their furnaces with polluting fuels that had been abandoned.

British Glass makers are thinking of using fuel oil again because gas prices are so unaffordable.  One industry player said with “Cop26 around the corner, it’s not a great advert.”

European energy prices are spiraling out of control. Gas prices have surged 60% in just two days, pushing industry in the region to the breaking point and rattling financial markets.

…environment ministers across the bloc are getting jittery, with a number of countries expressing growing concern over the EU’s plans to create a new emissions trading system for road transport and heating — something they deem will hit the poorest most.

Panic is spreading, and prices are rising to the point where people will be forced out of business or back to using coal

The global energy crisis continues to gather momentum, and since the Chinese government issued its “whatever cost” order last week, the price of Dutch TTF gas, the European benchmark had by early Wednesday surged more than 80% to EUR 155 per MWh, before witnessing a sharp correction to EUR 115, reflecting an increasingly difficult market situation. The focus on ESG and green transformation has reduced producers’ normal long-cycle capex response to surging prices and rising demand. Without a response from producers, the only other option is for prices to reach levels that triggers demand destruction, and that is the phase we have now entered.

Some real hockey stick graphs in gas, coal, and cost of electricity: 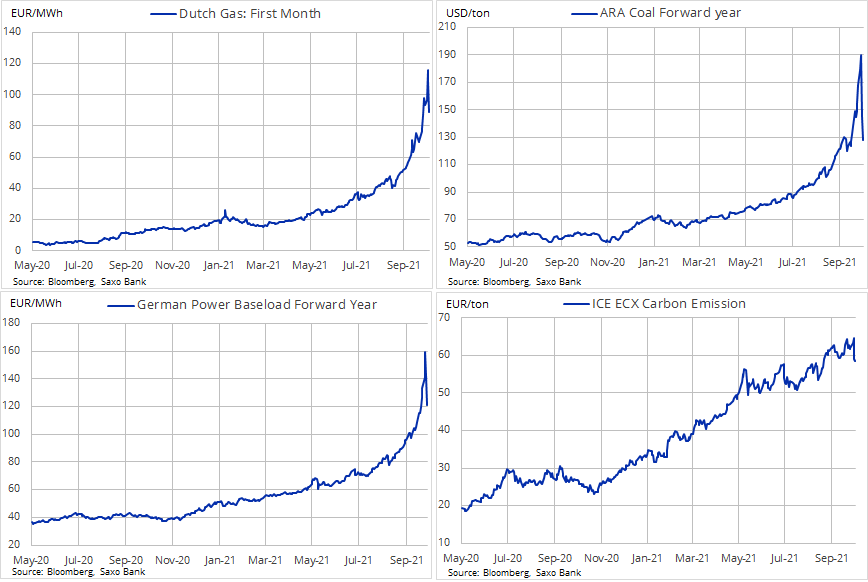 The rally which started in Europe several months ago has during the past months been spreading like a wildfire to the rest of the world. The combination of gas in short supply, and lower-than-expected power generation from solar and wind has forced utilities to buy coal in order to maintain the required baseload across the electrical grid.

To put the current elevated prices in Europe into perspective, the price of Dutch TTF first month gas earlier today reached a record €155 per MWh or $52.5 per MMBtu or around eight times higher than the average seen during the previous five years. German power prices for 2022 delivery have risen to €155 per MWh and more than 4X the five-year average. Tight supply of gas has forced power generators to turn to coal…

Ole Hanson points out that the squeeze may ease up if the weather doesn’t get too cold, or if enough heavy industry shuts down so the storage tanks can be filled before winter.

GWPF says Boris should get serious about Shale Gas:

If Boris Johnson wants to avoid a worsening energy crisis that could threaten his premiership sooner rather than later, if he wants to bring down the price of natural gas, if he wants to level up by creating a new and high-wage industry in the North of England, if he wants to energise Britain and improve energy security, he should abandon his foolish ban on shale gas extraction and kick-start the much delayed shale revolution in the UK.

And remind us of what Boris said, not that long ago:

“It [fracking] is glorious news for humanity. It doesn’t need the subsidy of wind power. I don’t know whether it will work in Britain, but we should get fracking right away.” — 9 December 2012, Telegraph