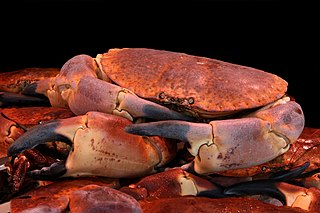 Edible crab like the one used in the study. Jean-Pol Grandmont  Wiki

It’s a Nightmare on Crab Street.

Crabs are being drawn to high Electromagnetic (EMF) fields around undersea cables and getting trapped there, “mesmerized”.

They are not just immobilized, in lab tests it screws up their blood chemistry too.

And if the field strength affects crabs so obviously, what other marine life is also being impacted? The magnetic fields may be playing havoc with migrating fish and turtles. Who would know?

Where is the Green outcry, or The save-the-crabs campaign? Do Greens even care or are some kinds of pollution OK “for the greater good”?

These are not some esoteric rare crustacean, by the way, but common dinner crabs. So that food chains and fisheries at risk too.

In a new study, researchers found brown crabs ‘freeze’ when they come too close to the electromagnetic fields generated by these cables. This disturbing behavior may negatively affect the marine creature’s migration habits, among other things.

For their new study, researchers at Heriot-Watt University studied nearly 60 crabs at the St Abbs Marine Station in Scotland and found that the high level of electromagnetism coming from the subsea cables is affecting the blood cells of the crabs, which could make them more susceptible to bacterial infections. And that’s not all.

“This doesn’t sound like a problem”? The writer feels they have to explain why this might not be good. Seriously? If these crabs were victims of coal plants the headlines would be a catastrophe.

Alastair Lyndon, a researcher from Heriot-Watt University and one of the study’s authors, said that crabs are attracted to the electromagnetic field and just sit still when exposed to it. While this doesn’t sound like a problem, if crabs aren’t moving they aren’t looking for foraging for food or a mate. The researchers also found the magnetic fields are causing changes in the animals’ sugar metabolism.

“We found that exposure to higher levels of electromagnetic field strength changed the number of blood cells in the crabs’ bodies. This could have a range of consequences, like making them more susceptible to bacterial infection,” added Dr Kevin Scott of St Abbs Marine Station.

Surprisingly little research has been done on how underwater cables may be impacting marine life. In fact, most of the concern has surrounded how wildlife is prone to damaging the cables, not the other way around. Nevertheless, it’s clear that human activity is changing the natural electromagnetic environment and many marine creatures, from sharks to lobsters, are sensitive to electromagnetic fields.

From the paper, the lower strength fields of 250 µT didn’t appear to affect the crabs, but at 1000 µT the fields were blocking their circadian rhythm, causing hyperglycemia (raised blood sugar) and changing crab behaviour.  What are the options? Burying the cables, shielding them, or splitting them into multiple lower strength paths? Just add another major expense to the bat and bird killing towers that make unreliable energy.

This increased attraction to the source of the EMF, despite showing signs of physiological stress, has clear implications for C. pagurus in areas around MREDs. Many offshore sites have introduced no-take zones around turbine arrays, with speculation that the decrease in fishing pressure, combined with the addition of artificial reefs in the form of scour protection blocks, could enhance the overall crustacean population by providing refuge and breeding areas [27]. However, an attraction to subsea power cables emitting an EMF of >500 µT could come at the cost of time spent foraging for food, seeking mates, and potentially finding shelter, which is a cause for concern. Although the primary underlying mechanism responsible for the effects of EMF on living organisms is unclear changes in cell membrane permeability, gene and protein expression, and developmental changes such as cell growth and proliferation have all been documented during exposure to EMF [65–67].