This article was first published in TrialSiteNews behind a paywall.

The root cause of many of the disastrous responses to this pandemic is the global echo-chamber created and sustained by Big Tech. Big Tech companies (Google, Facebook, Twitter, Microsoft, Apple – in that order) systematically endorse false information and harmful governmental decisions, reject effective treatments, and collude among themselves to eliminate any dissenting views.

For example, no matter how many doctors and even politicians become convinced that Ivermectin is effective against COVID-19, Big Tech maintains its anti-Ivermectin position. The narrative that “Ivermectin as a treatment against COVID-19 is disinformation” is ingrained in the brains of Big Tech’s low- and middle rank censors, encoded in its databases and AI, and even in its business relationships. It is highly unlikely that any of Big Tech’s high-level executives would step in to change this narrative. Initiating such a change would almost an admission of guilt, acknowledging that their company imperiled millions of people who would have greatly benefited from the treatment.

Let’s take Google, for example. Regardless of what happens in the real world, Google always finds anti-Ivermectin stories to display at the top of its search results. This is a screenshot from Google search for Ivermectin (clean browser, Tyler TX, Oct 24, 2021; your results will differ): 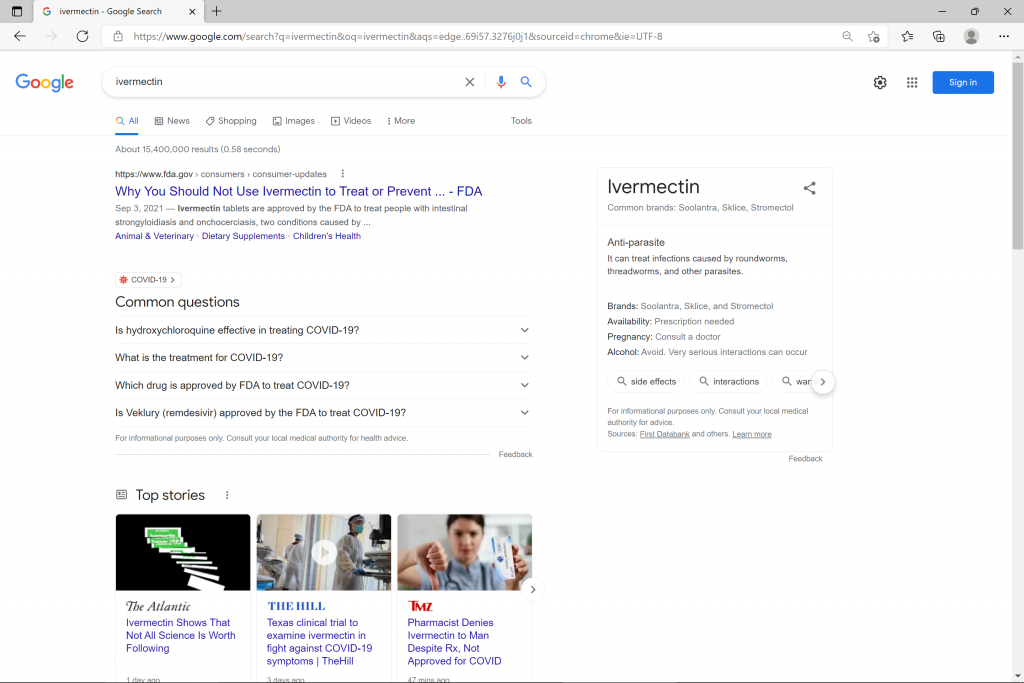 As usual, the FDA’s horse hoax “Why You Should Not Use Ivermectin to Treat or Prevent …”) is at the top. It is followed by Google selected news. The first piece is from the Atlantic, rejecting Ivermectin because “Not All Science is Worth Following”. It is signed by a co-author of an anti-Ivermectin letter published in Nature. Next comes a piece from the Hill, insinuating that the use of Ivermectin for COVID-19 is in a trial phase. This top placement of anti-Ivermectin articles naturally creates artificial demand for them, ensuring that Google never runs out of them.

In addition to disseminating false information, Big Tech companies threaten articles and publishers that support Ivermectin (or other effective treatments like Hydroxychloroquine). These threats include removal from the Facebook News section, deplatforming, demonetizing, de-ranking, and every other sort of abuse. Conducted collusively, these actions become a kiss of death for almost every large publication. This type of chilling effect, accomplished by threats, usually flies under the radar, as opposed to outright public deplatforming, which often garners criticism.

Banning content with any positive information on Ivermectin and penalizing its publishers creates a vicious spiral. Even without any additional human interference, Google’s AI concludes that treating COVID-19 with Ivermectin is a fringe conspiracy theory and further downranks or penalizes such content and its publishers. And so, it continues.

YouTube suspended Australian Sky News for lukewarm clips about IVM and HCQ, stating that: “The clips didn’t provide ‘sufficient countervailing context’ to indicate the claims were false”. Sky News, a large TV network, was forced to bow to Google and feature no more Ivermectin clips. Such successes embolden Big Tech and intimidate publishers.

Frequently, what passes for support for Ivermectin is weak and ineffective. For example, Breitbart’s Ivermectin articles usually point out the media’s lies about Ivermectin, rather than presenting the surmounting evidence of  Ivermectin’s safety and effectiveness as a COVID-19 treatment. Breitbart is still accepted in Facebook’s News Section, and apparently, it does not want to jeopardize this concession by going against the dominant narrative.

Most mainstream media companies depend on Big Tech both financially and for information, so they do not deserve a separate discussion here.

Such blatant controlling actions by Big Tech would be outrageous and likely illegal even if they were 100% correct on the subject matter. But considering how wrong they have been on so many pandemic responses, it’s staggering. Any other business would have been sued into oblivion by surviving COVID-19 patients and the relatives of deceased victims.

Big Tech’s systematic elimination of all positive information about IVM, combined with a constant barrage of negative stories, undermines the faith and will of doctors and  impacts decision makers, from politicians to insurance companies to the DC health care bureaucracy (CDC, FDA, & NIH/NIAID). Big Tech, in turn, justifies its attitude toward Ivermectin by the stance taken by the federal health bureaucracy. This creates a deadlock, because the federal bureaucracy cannot change its mind in the atmosphere that muffles criticism and encourages it to harden it wrong stances.

All organizations, but especially federal agencies, are handicapped by the forced telecommuting during the pandemic. It sharply decreases the amount of in-person communication and the quality of any communication. It also effectively puts everything on record, chilling both dissenting opinions and consideration of dissenting views. It also makes everyone more dependent on Big Tech.

For these reasons, I think that legal actions should target Big Tech first. Their immunity under Section 230 is a myth, propagated by themselves. Neither are they speakers, nor publishers protected by the First Amendment. Their impunity is more political than legal.

I think that a good lawyer, with knowledge of the medical facts and Big Tech operations, can obtain a temporary injunction against Google/Facebook/Twitter as state actors under the First Amendment. Such an injunction would stop them from suppressing information and debate about Ivermectin, other COVID-19 drugs, and public health actions. Thousands of lives lost daily justify an immediate injunction.

Google, Facebook, and Twitter are state actors, which requires them to respect the rights of all citizens, including free speech. Many federal government agencies (including the FDA), state and local governments publish some essential information exclusively on Google YouTube, Facebook, or Twitter. To merely view this information on the Big Tech platforms, citizens must accept their unhinged Terms of Service (or so they think). The government has also created multiple accounts on these platforms and made them public forums for communication with citizens and for the public discussion of  political matters. There are more factors making Big Tech companies state actors.

Other causes for actions against Big Tech include:

After the first success, the road will be easy. But somebody must act.