Far from being the wild fringe, this was middle Australia speaking.

JP Morgan and Ubermedia traced the phones of people at the enormous rally in Melbourne on November 20 and discovered that they came from everywhere and every class.

Half the people at the rally were the richest, most educated or the average homeowner and the other half were the strugglers, the truckies and cleaners, but also the the young professionals and libertarians, and fitness junkies.

All sides of the political spectrum were in the streets. Something that ought to shake any  politician in an election year.

Tens of thousands of protestors who took to the streets of Melbourne in some of the largest protests so far against government-mandated COVID-19 health regulations hailed from a broad cross-section of society—including the wealthiest segment of the state—and were not extremist or fringe elements portrayed by some media outlets.

The heat map shows the origin of the protestors

Some people drove from miles away: 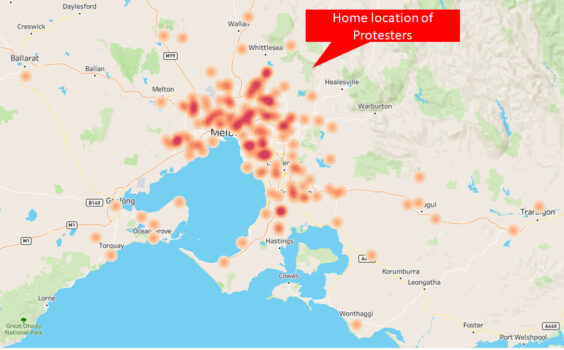 People came from all over Victoria. (Roy Morgan and UberMedia, data was anonymised).

As many as 30% were from the highest income and most educated brackets (earning $133,000pa). These include the “Blue Chip” the progressives, humanitarians and career achievers and entrepeneurs.

Another 23% were what is called Home & Hearth, “closest to the average Australian”. 15% were the young professionals, and another 15% were lower socioeconomic groups the “Fair Go” crowd. The black lines represent the proportion these groups normally have in the population.

This is a microcosm of the whole nation. The most over-represented groups were the “average” homeowners and the struggling low socioeconomic groups. But the richest most educated group was nearly a third of the crowd, exactly in proportion to it’s population.

The Herald Sun still tried to tag on a fringe allegation:

Suburbs where ‘freedom’ protesters are from; probe into far-right influence

The headline melded the protest origins story with news of how “The state government will support the Victorian Greens’ bid to launch a parliamentary inquiry into the rise of far-right extremism. “