The Telegraph have apparently just woken up to the reality of EVs! 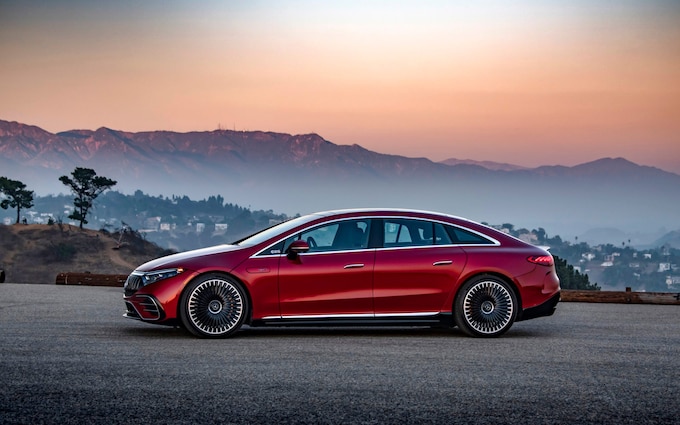 The Mercedes EQS is the best option for those wanting to travel long distances CREDIT: Mercedes-Benz AG/MediaPortal Daimler AG

Just one of the 20 most popular electric vehicles can make the journey from London to Edinburgh on a single charge, despite the Government’s attempts to persuade drivers to switch to greener vehicles.

More than 190,000 electric cars were sold in Britain last year and they accounted for about 11.6pc of total sales, according to the Society of Motor Manufacturers & Traders. However, there are still significant drawbacks to electric cars.

Many potential users have “range anxiety”: they fear batteries will run flat before the destination is reached. This could mean stopping for hours mid-journey to recharge. Almost two thirds of the population have concerns over the distance an electric car can travel between charges, according to Cazoo, a car website.

New research found that only six of the 20 most popular electric vehicles can make the journey from London to Newcastle on a single charge.

High-profile models that cannot make the 283-mile journey without a stop to recharge include the Hyundai Kona, BMW iX xDrive40 and Nissan Leaf, according to research compiled by the car website Auto Trader for Telegraph Money. There are versions with more powerful batteries capable of longer ranges. The Kona EV 64kWh for instance, can travel up to 300 miles on a single charge.

Cars that are able to make the journey include the Mercedes EQS, the Kia EV6 and the Ford Mustang Mach-E, according to Auto Trader. But only the Mercedes can make the 404-mile journey from London to Edinburgh on a single charge. The car has an estimated range of 419 miles.

In fact this is just another example of the shoddy journalism which we have become accustomed to from the Telegraph.

As a quick check would have revealed, these mileages are obtained from laboratory testing and do not reflect real world driving conditions.

We already know from mileage calculators, provided by Audi, Vauxhall and others for their electric cars, that range is cut by at least a fifth in real conditions. The range is probably much less still in poor weather conditions and with a full load on board.

It is also highly unlikely that a driver would start with a 100% charged battery. To prevent damage to batteries, once the charge reaches 80%, the recharging is slowed down significantly by the software. Literally it can take as long to charge from 80 to 100%, as it did from 0 to 80%. Whether charging at home or on a public one, it is unlikely a driver would wait long enough for a full charge.

Finally nobody will risk running the battery down to zero charge, any more than you would use the last teaspoon full of petrol.

In practice then real world range would not be much more than a half of the stated mileage.

If we factor that into the three examples given, we get:

If you’ve got a 100 grand to spare, you might just get to Scotch Corner, otherwise you’ll have to stop at Leeds.

The report below is from the carbuyers’ website, Honest John. It refers to the Leaf:

First up, a little bit of background. Our daily commute is about 70 miles a day, with the first 15-minutes being stop-start traffic dropping the kids off at school, then 20 minutes of motorway driving, before a final five (sometimes 10 minutes) on A-roads with a bit of overtaking lorries up hill.

Why is this important? Simply because the answer to the two questions at the start will depend entirely on how you’re driving and how you’re planning to charge.

While our daily commute is well within the Leaf’s official range of 168 miles, not all range miles are created equal.  For a start, that figure of 168 is more like 140 miles. So a 60-mile commute should see us return home with more than 50% battery, making it possible to go two days without charge.

But this isn’t possible, for two reasons. The first is that we often return home with less than 50% battery (more like 45%). That’s because, as a rule of thumb, if you’re going over 60mph you’re going to use more than one range mile for every actual mile you cover.

Our personal worst was a 60-mile round trip, three up with luggage and running a touch late. We left home with 85% charge and returned with just 3% with Eco mode kicking in for the last 20% of the battery’s charge.

The second reason we have to charge every night is that it simply isn’t possible to refill the battery from almost empty ‘overnight’. Plug-in a near-empty Leaf to a domestic 3kw three-pin socket and realistically you’re looking at a charge time of more than 16 hours.

That comment about the 60 mile trip running the battery down from 85 to 3% is really a shocker. It presumably is a reflection of the fact that the car had three on board with luggage.

I can foresee really hideous problems coming our way in future, with drivers, who have naively believed all of the propaganda fed to them by EV proponents, finding themselves stuck on motorways with no charge left.

Heaven help them if they are on smart motorways.

The shocking reality, that most people have not yet woken up to, is that, unless you’ve got 50 grand to spare, electric cars will mark the end of driving out to the seaside or into the countryside for the day, or a long trip to see friends or family.

And if you want to use it to go on holiday, be prepared for long queues at the services!

I wish they would drop this ridiculous term “Range Anxiety”, which makes it sound as if drivers are worrying unnecessarily.

It is not drivers who are the problem, it is the wretched cars.

It is time that journalists did their homework and reported EV range as a serious drawback for the cars.