Luckily for Energy Oligarchs, Australian electricity prices have bounced right back to pre-pandemic insanity. Wholesale rates are romping around $170 dollars a megawatt hour in April across the whole national grid…

The media mouthpieces are blaming it on outages of coal turbines — even though wind power fails every week, and solar fails every day. If unreliable generators cause high prices, then Wind is King Fickle. They’re also blaming high coal prices, but coal itself, is a small part of the cost of a two billion dollar plant. Naturally, neither political team has a clue how to fix this. But it’s all so banal — the prices are set at auction, and some fuels are cheap. Add more of the cheap type, and we’d get cheaper electricity.

Right now, if there were more black coal plants setting the price more of the time, electricity would be half the cost. If enough brown coal plants like Hazelwood were still running, the prices would be a fifth. It’s all there in the data that ABC journalists never find. Consider the winning bids by fuel type in Australia for the last quarter of 2021. For Brown Coal, the average winning bid was $11 a megawatt. Eleven!  When the Australian grid had a bit more coal, and a lot less unreliable renewables, the average cost for decades was $30 per megawatt.

The reason a few broken coal turbines seem to wreck havoc on the Australian market is because we need them all to keep prices down, and don’t have any to spare anymore. Imagine how much fun it will be when we shut the rest of Liddell down?

The real cause of hideous prices are the geniuses in government who thought they would stop some storms if they subsidized the unreliable generators and drove the cheap ones off the grid.

The ABC as usual, works as advertisers for the Renewable-Industrial-Complex and the side of politics that pays the ABC the most. 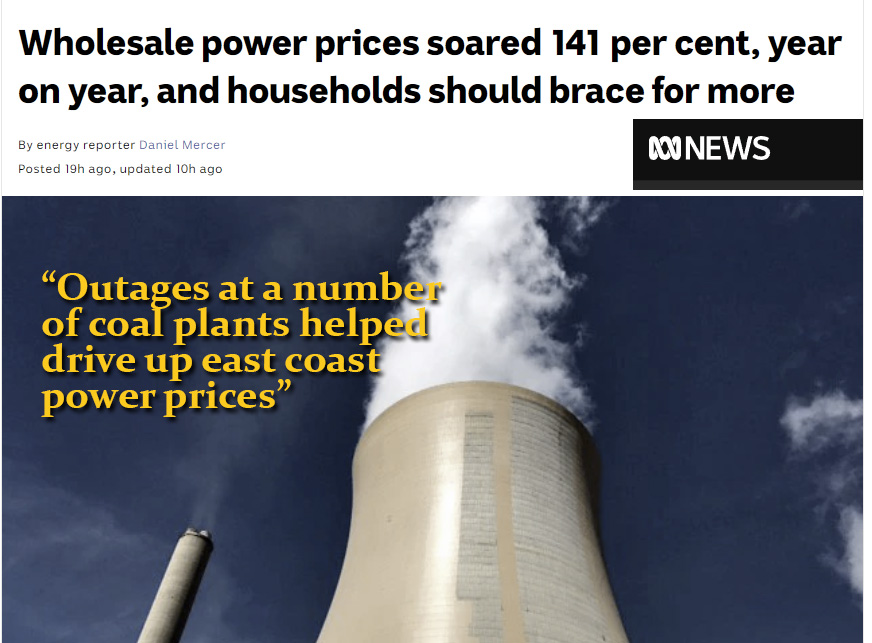 Behold the graph below from the last quarterly report of the AEMO (Australian Energy Market Operator). The cheapest prices were all set by brown coal, and that was at a time when coal prices were at record highs of $200 dollars a ton. But even the black coal prices then are half the price of gas, and half the price of the current market. It follows then, that coal power is not winning enough bid stacks at the moment, and if we had more coal, we’d have cheaper electricity.

They could have headlined this graph: “Brown Coal still impossible to beat”.

For  what it’s worth, global coal prices in the last quarter of 2021 were not as high as now ($330) but still a record at the time — and a meaty $150-$250 per ton — all of it very high compared to the long term average of $50 – $100 a ton.  During these highs our coal plants were still out-bidding and generating electricity cheaper than all the other sources. Though they likely have forward contracts so they’re not prey to these spikes. But push came to shove, and Australia has 300 years of coal to dig up. It’s not like we couldn’t mine a bit more…

Cheap electricity isn’t a radical idea.  It’s what we did for 30 years.

h/t to Dave and George, Wazz, and Old Ozzie.