Back to the drawing board!!

At a cost of more than A$3 billion, Gorgon, the largest carbon capture and storage (CCS) project in the world has failed to deliver, underperforming its targets for the first five years of operation by about 50% finds a new report from the Institute for Energy Economics and Financial Analysis (IEEFA).

Carbon capture technology has historically been used as a method of enhanced oil recovery (EOR) – selling captured CO2 to oil companies to push more oil out of depleted wells, making any initial “carbon capture” negligible. According to the Global CCS Institute, about 73% of carbon capture globally is currently used for EOR projects – called Carbon Capture Utilisation and Storage (CCUS).

In some newer projects like Western Australia’s Gorgon CCS, instead of being sold for EOR, the captured CO2 is sequestered in dedicated geological storage structures. Although Gorgon’s gas plant produced its first LNG cargo in March 2016, the first CO2 injection from its CCS facility occurred in August 2019 — three and a half year late.

“Gorgon CCS failed to reach its pre-defined targets,” says report author LNG/gas analyst Bruce Robertson. “CCS technology has been operating for 50 years. If Chevron and its partners can’t get it to work these past 5 years at Gorgon, it’s not an effective technology for reducing carbon emissions.”

“It has been estimated that it would cost up to US$184 million for Chevron and its partners to offset that shortfall,” says Robertson.

“Rather than continuing with fossil fuels and the technological impracticalities of trying to capture their pollution, governments and investors must address the root cause, and limit fossil production. “Urgent investment in renewable energy and storage technologies is the cheaper and proven pathway going forward.” 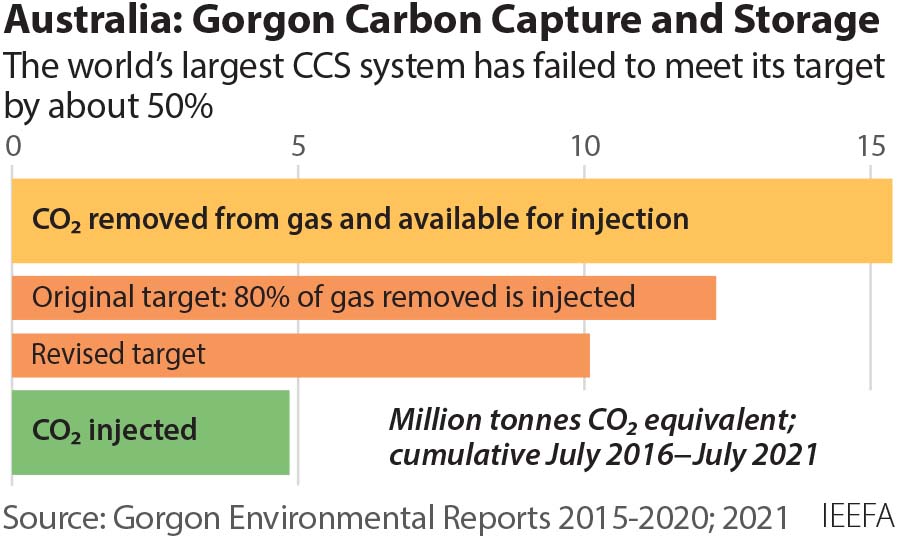 Carbon capture may one day work effectively, but we clearly cannot rely on it now.