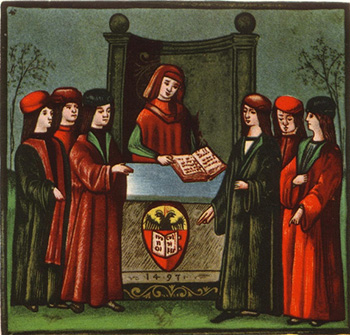 The oldest university in Europe has been running since 1088AD.

It took a thousand years of hard work to create a reputation of excellence and honor that is being casually vaporized and bled dry in a fashion frenzy of Wokery.

This year in the US undergraduate enrollments fell by 650,000 in a single year — and the departure was led by young men.

For the last thirty years people in Ivory towers were treated like Gods and came to believe their own advertising. Who could blame them? No one in the media asked them a single hard question so the illusion of their glorious prophesies remained intact even as their absurd predictions crashed upon the shore.

The academics fell over themselves to outscore each other in a pointless Victimhood status game where they earn points by insulting one of their main client groups. No wonder men are leaving.

Nationwide undergraduate enrollment has dropped by more than 650,000 students in a single year—or over 4% alone from spring 2021 to 2022, and some 14% in the last decade. Yet the U.S. population still increases by about 2 million people a year.

Men account for about 71% of the current shortfall of students. Women number almost 60% of all college students—an all-time high.

Monotonous professors hector students about “toxic masculinity,” as “gender” studies proliferate. If the plan was to drive males off campus, universities have succeeded beyond their wildest expectations.

Bureaucrats took over universities and drove out the students.

At Yale University, administrative positions have soared over 150% in the last two decades. But the number of professors increased by just 10%. In a new low/high, Stanford recently enrolled 16,937 undergraduate and graduate students, but lists 15,750 administrative staff—in near one-to-one fashion.

One of the top universities in the world is rejecting 70% of those with perfect SAT scores?

Since 2020, the old proportional-representation admissions quotas have expanded into weird “reparatory” admissions. Purported “marginalized populations” have often been admitted at levels greater than percentages in the general population.

Stanford’s published 2025 class profile claims a student body of “23% white.” Fewer than half of the class is male. Stanford mysteriously does not release the numbers of those successfully admitted without SAT tests—but recently conceded it rejects about 70% of those with perfect SAT scores.

At some point universities were captured by Big Government as the largest sole source of  their income, and thus, inevitably they came to serve Bigger Government instead of serving science, or students, or even employers.

Given the bloat, the cost, and the crushing spirit of political correctness, it’s a matter of time before other training programs and private testing services take over their role to connect the best students with the top paying employers.

Artwork: The University of Bologna is the oldest continuously running University in the world.