It is a remarkable claim because the last figures that I found show that solar PV plus wind generated only a tiny fraction of total energy compared to fossil fuels. So I would doubt that solar PV and wind suddenly could replace all coal, oil and gas in just a couple decades. Two decades seems like an awfully short time to go from (almost) zero to hero.

That made me really curious about the principle behind this claim. To clarify their case, the authors showed two graphs. This is the first one:

This surely represents installed capacity of solar PV and wind versus the other fuels. That is rather misleading. You can’t reliably compare power sources with a vastly different capacity factor.

It is however not really clear what is presented here. It is explained as:

The path to dominance by PV and wind. In 2018, PV and wind are likely to comprise 60% of net new electricity generation capacity worldwide.

The “dominance by PV and wind”, that are big words. Looking at the numbers, I guessed that this graph represented the additional installed capacity in 2016 compared to 2018. This was confirmed when I followed the link to another Convensation article by one of the authors where I found this graph:

The new additions for a certain year also doesn’t say anything about how big or small the actual installed base is.

The second graph they showed to clarify their case is this:

It shows solar PV & wind plus hydro versus fossil-fuels & nuclear. When they add wind & solar PV with hydro, then this surpasses fossil-fuels and nuclear somewhere around 2026 and there will be no fossil-fuels nor nuclear anymore by 2032. All replaced by wind, solar and hydro.

That is apparently where the claim that “solar and wind are on track to replace all coal, oil and gas within two decades” comes from.

Without trying to figure out whether this trajectory is realistic or whether an intermittent energy source could totally replace a dispatchable one, there is something more fundamentally going wrong in their reasoning. Looking at the units (TWh), the values (25,000 TWh in 2016) and the share (8% for solar PV and wind in 2018), this graph clearly represents electricity consumption. Yet, our energy consumption is much more than our use of electricity. There is also transport, heating,… and fossil-fuels plays an important role there. 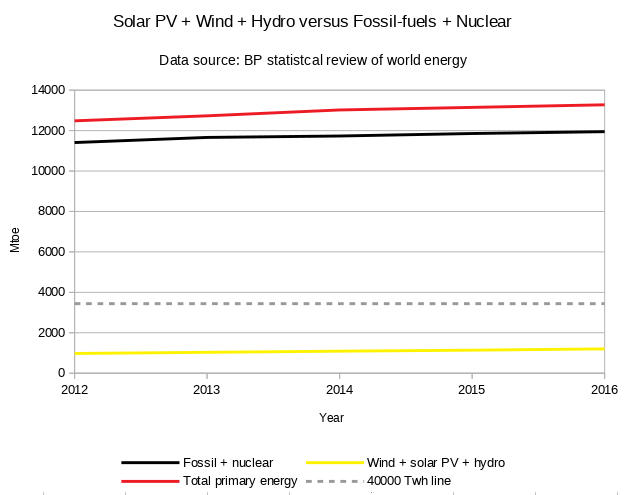 The grey dotted line shows the upper border of the previous graph (40,000 TWh). To get this value, I converted 40,000 TWh to Mtoe (this is the unit primary energy consumption is presented in) via the EIA unit converter. The result is 3,439 Mtoe. Just to give some idea of the scale of fossil fuel use outside electricity production.

Even if, for the sake of the argument, that yellow line would reach the grey dotted line in 2032, then still two thirds of the fossil-fuels are being used.

However, that is not what the title suggested (it is solar PV and wind that will do the trick). We get this without including hydro or nuclear:

The authors also seem to be aware that there is a lot of fossil-fuel use outside electricity production. They write (my emphasis):

Deep cuts (80% reduction) in greenhouse gas emissions require that fossil fuels are pushed out of all sectors of the economy. The path to achieve this is by electrification of all energy services.

At the end of the article they then mention (my emphasis):

Electrifying the whole energy sector of our economy of course means that electricity production needs to increase massively – roughly tripling over the next 20 years.

Which is also what I see in the BP data. What I don’t see in their graph is this tripling electricity consumption from now to 2032. Which is not exactly surprising, since it would expose their claim as full of hot air.