Average global temperature has been falling for the last 3 years, despite rising atmospheric CO2 levels. 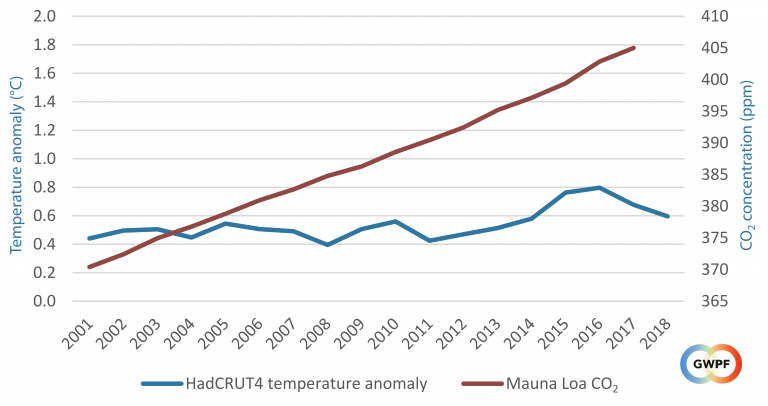 A big story at the beginning of each year is the release of the global surface temperature of the previous year. A big story certainly but not often a surprising one.

Since the beginning of the century it didn’t change much from year to year until the 2015/16 super El Nino came along. Then the temperature went up, as usual, and now it’s coming down again.

2018 was the fourth warmest year of the instrumental period (started 1850) having a temperature anomaly of 0.91 +/- 0.1 °C – cooler than 2017 and closer to the fifth warmest year than the third. But of course there are those that don’t like to say the global surface temperature has declined.

It says: The forecast for the global average surface temperature for the five-year period to 2023 is predicted to be near or above 1.0 °C above pre-industrial levels, says the Met Office. If the observations for the next five years track the forecast that would make the decade from 2014 to 2023 the warmest run of years since records began.

No mention then of the events that elevated the global 2015 and subsequent years, the EL Nino and the Pacific marine heatwave.

More recent forecasts have not fared well either showing little skill. The Met Office has a tendency to forecast a world that is warmer than it actually is. Sometimes their climate forecast looks better than they were because an El Nino occurred that temporarily elevated global temperatures.

Fig 1 shows how off their forecast was. You can see that since 1997 they have always predicted way too high except when an El Nino helped them out in 1998 and 2015 -17. (click on image to enlarge) 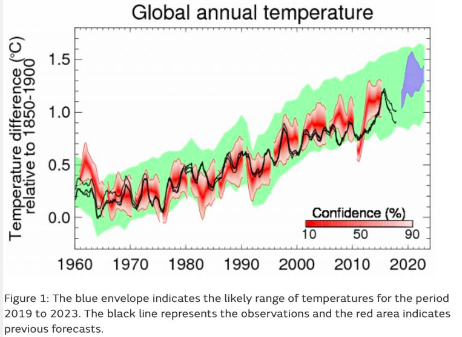 Looking at the same graph published in 2017 for previous forecasts (Fig 2, click on image to enlarge) shows they failed in their 2016 – 2021 forecast. 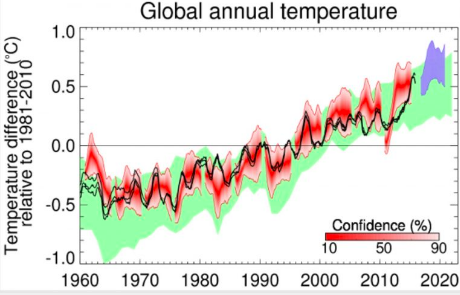 The new forecast, according to the Met Office’s Professor Adam Scaife, may bring about “rapid warming globally” with a 0.55 °C warming by 2023. At least it’s a testable prediction, like the rapid warming forecast in 2007 that didn’t happen.

In a recent press release the Met Office said that in 2019 they expect to see one of the largest rises in atmospheric carbon-dioxide concentration in 62 years of measurements.