As we will see, March 2019 ended with a flash melt that reduced extents dramatically in the final week or so.  First the graph of March comparing the daily extents.

Note that 2019 was close to average as recently as day 79 before dropping well below average and recent years.  As reported previously, most of the decline was due to early melting in Bering Sea, which loses it ice every Spring anyway. Below compares NH ice extents with and without Bering ice.

The gap between the black and green lines shows Bering contributed on average ~600k km2 to overall NH ice extents at the beginning of February, increasing to 800k km2 by end of March.  In 2019, the gap between the cyan and purple lines shows ~500k km2 of Bering Ice starting in February, decreasing to 140k km2 by March, then increasing up to 450k km2, and now back down to 180k km2. When the Bering volatility is set aside, the purple and green lines show Arctic ice excluding Bering was above average most of the month, and only slightly lower at the end.

So what has been happening?  In two words: Polar Vortex.  When cold |Arctic air descends into parts of North America and Euarasia, warm air intrudes into the Arctic to replace it, and ice extents are reduced. For example, see the recently reported balmy weather in UK, and soon to be switched to bitter cold weather. From the Express  UK weather forecast: SHOCK Map shows Britain ENGULFED by freezing Arctic weather front

The cold front is shown in the image, The link underneath goes to the video. 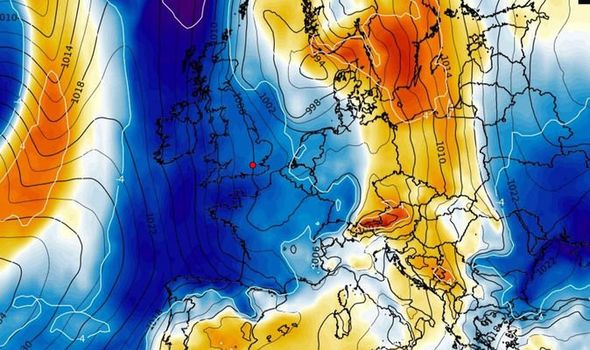 The table below shows extents for day 90 comparing 2019 to the 12 year average, and also showing the 600k km2 loss of ice in just 8 days at month end.

Note that BCE (Beaufort, Chukchi and East Siberian) is rock solid, along with Laptev.  Atlantic metling has begun, with the largest losses in Barents and Baffin Bay.  The major deficit is Bering is there, and while Okhotsk has started melting, it remains 235k km2 above average at this time.