As we know, Britain recorded its hottest day on record in Cambridge last month. But does this mean that it was the hottest day for the country as a whole?

I now have the data from the Met Office, which proves that it was not as simple as that.

The BBC gave a clue as to what was happening, with the hottest of the weather over eastern and central areas of England: 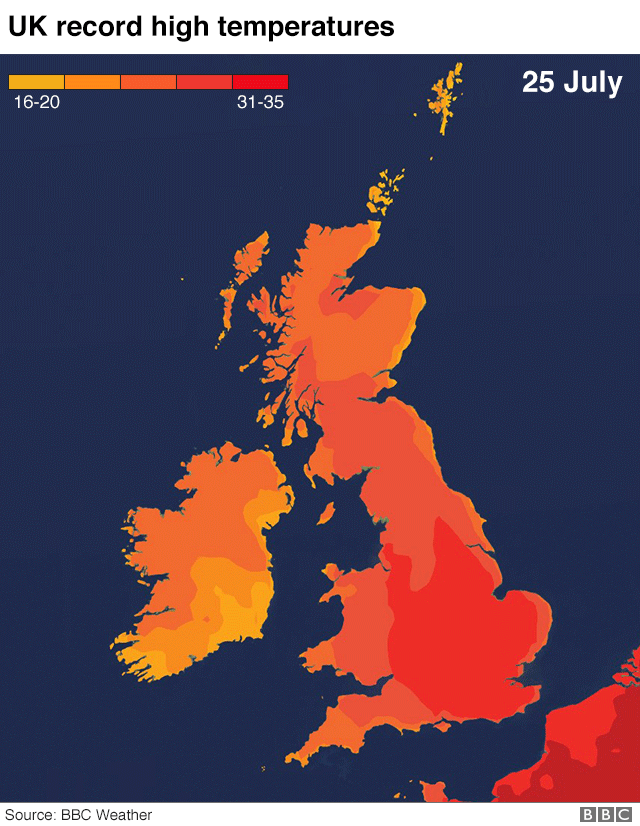 I asked the Met Office for a list of temperatures for that day, along with the record, for a range of stations giving a representative sample of the whole country.

Bold items are where new records were set last month:

As we can see, these new records were clustered in that area on the BBC map, which tends to be the warmest part of the country anyway.

If you’ll excuse my attempts at graphic design (!), I have tried to circle this area below:

These are mainly on the western half of the country, although Leuchars is in Fife, eastern Scotland, and Hurn in Dorset. In other words, quite a wide expanse of Britain.

The Met Office record temperatures by district back this up:

Whereas 2019 only features for England E & NE and East Anglia (Cambridge is effectively on the border of the two anyway), 1990 appears under England NW, Wales N, Midlands, England SW and Wales S.

It is therefore arguable that August 1990 was every bit as extreme as last month’s heatwave. Naturally the temperatures recorded in 1990 were not as high as that in Cambridge. But the latter is in one of the warmest regions, where you would expect temperatures to be higher than, say, Wales.