Jeremy Warner had this article in yesterday’s Telegraph:

Possibly more in hope than expectation, Sajid Javid, the Chancellor, plans to deliver a Budget on Nov 6, by which time we are meant to have left the European Union.

It will be a faintly surreal affair – a pre-election giveaway, with the fiscal rules massaged to accommodate the extra borrowings needed to pay for it all. Yet without a majority in Parliament, there is little chance of implementation. Johnson needs to win an election first.

One of the consequences of the last three and a half years of Brexit torture is that all other big picture priorities have been shunted aside; if, tantalisingly, we are now close to leaving, then finally we will be able to start thinking about wider challenges.

One such issue is climate change, which the Government promises to tackle by committing to an almost wholly meaningless target of net zero emissions by the middle of the century. Targets are worth nothing without a credible plan for achieving them, and so far we don’t have one. 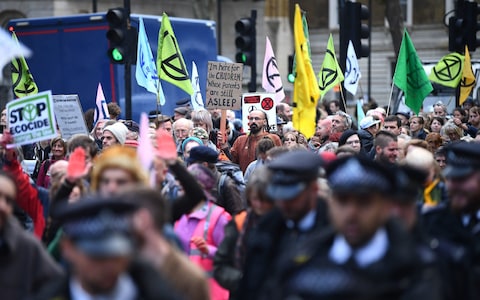 The Juncker curse has it that “we know what has to be done, we just don’t know how to get re-elected afterwards”. Climate change is a case in point. There is overwhelming public support and pressure for action, until, that is, the costs of it are laid bare.

In the short term, these will be considerable, with the payback uncertain and long into the future. Crudely imposed climate change measures can moreover easily backfire, as occurred with the “gilets jaunes” protest movement in France when a rapid ramping up of carbon taxes at a time of stagnant wages erupted in an explosion of public anger.

Realistically, however, carbon taxes are likely to prove the only effective way of incentivising the required energy transition. All the alternatives – emissions trading schemes, carbon floor prices, feebates (incentives to buy fuel efficient goods such as electric cars) and heavy-handed regulation (enforced energy efficiency standards) – tend to fall short in some way or other.

How could the Chancellor introduce such a tax without destroying his party’s electoral prospects? A potential answer comes in the form of new analysis by the International Monetary Fund. This concludes that a carbon tax of $75 (£58) a ton globally is needed within the next 10 years to contain the rise in temperatures to the two degrees scientists judge manageable.

Just to put that in perspective, the current effective average tax on carbon globally is just $2. By the IMF’s calculation, a $75 carbon tax would raise the price of coal by 200pc, natural gas by 70pc, and petrol by 5pc to 15pc, depending on how heavily it is already taxed locally.

The good news is that because the UK has already reduced its use of coal for electricity generation to virtually zero, the effect is not going to be as bad for us as many others. Even so, it’ll be quite bad enough; a $75 carbon tax would raise the UK’s overall tax burden by around 0.7pc of GDP.

Yet provided this is done in a revenue neutral manner, it might not be as politically controversial as it seems. Combining carbon taxes with offsetting, equally distributed dividend payments to the public would disproportionately benefit low earners, with around 40pc of the population making a net gain, and would thereby create a large constituency in favour of the tax.

Any loss of international competitiveness among those with high carbon taxes could be countered via border adjustment tariffs of the kind already being considered by the European Union. This would in turn incentivise laggard nations to fall into line.

I’d be surprised if any of this gets an airing in the Budget on Nov 6, but sooner or later, carbon taxes are coming, driving transformational change that frankly is likely to be much bigger in its real life impact than the obsession of the moment – Brexit.

Just because you keep repeating an argument does not make it right!

A carbon tax on its own will inevitable have little effect on emissions, other than marginally reducing energy consumption.

After all, we already have the biggest carbon tax of the lot, fuel duty. Yet this has very little impact at all. It does not make us switch to EVs, it has little impact on fuel consumption. Indeed it does not even seem to make us but smaller cars, if the popularity of SUVs is anything to go by.

But it is a big earner for the government.

According to Warner, gas prices would rise by 70%, guaranteeing fuel poverty. But what else would that achieve? We still need to heat out houses and cook, and electricity is three times as expensive as gas, so nobody will be switching.

To eliminate emissions from natural gas means stopping people from using it, and forcing either electrical alternatives or producing and distributing hydrogen in mass quantities. The government simply has not got the money to pay for either of these unpalatable alternatives, as Warner himself should know.

Similarly nobody is going to buy EVs in any serious numbers, until conventional cars are banned completely, or taxed out of existence.

As for power generation, while carbon floor prices have encouraged generators to switch from coal to gas, it is subsidies which have brought wind and solar power on stream. Again, gas generation could be taxed out of existence, but then the grid would have no dispatchable power to fall back on.

And, as we know, higher energy prices will simply drive industry off shore. Warner’s potty idea of a border tariff would be of little help. It would simply increase the cost of living and trigger a trade war with China and other countries who have no desire to follow suit.

What is absolutely certain is that China and India will remain heavily dependent on fossil fuels for many years to come, whether they implement some sort of carbon tax or not.

One thought on “Jeremy Warner Hawks His Carbon Tax”