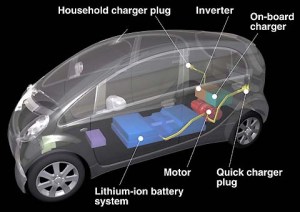 Critics of fuel power speak of the finite nature of oil and natural gas discoveries. A reminder here that resources are far from unlimited for EVs, in the short term at least. No sign of much appetite for switching to smaller cars either, with SUV demand rising fast.

The current production of a number of critical metals is insufficient for the large-scale transition to electric vehicles.

This is the conclusion of a report by environmental scientists Benjamin Sprecher and organisations Copper8 and Metabolic, reports TechXplore.

As a solution, they advocate more electric car-sharing, cars with a smaller battery and improved recycling.

The Dutch Climate Policy aims for 1.9 million electric cars in the Netherlands by 2030, compared to 171,000 at this moment—a growth of more than 1000 percent in less than 11 years.

But according to the report “Critical Metals Demand for Electric Vehicles’ – which looks at critical metals needed for this growth—it would be better to limit this growth, so that there will be a maximum of 1 million electric cars in 2030.

The authors assume a fair distribution: each country is entitled to a certain share of the global production of important critical metals, such as lithium and cobalt, in proportion to its population.

“Let me start by saying that we are definitely not against the introduction of electric cars,” says Benjamin Sprecher, researcher at the Centre for Environmental Sciences Leiden.

The transition to electric transport is important,” says Benjamin Sprecher, a researcher at the Institute of Environmental Sciences. “However, we must be aware that this policy is not without consequences.”

He explains, for example, that a greater demand for critical metals—which are also needed for solar panels and wind turbines—can be disastrous to nature. “Increased demand inevitably leads to the construction of new mines. In order to prevent inconvenience to humans, these will be located in remote areas, at the expense of already scarce nature reserves. We must be aware of this and ensure more sustainable mining.”

But that’s not enough, says Sprecher. “We consume an awful lot, so much so that it is no longer enough for us to have just one Earth. In the case of electric cars too, it is important that we look at ways to reduce the number of cars. For example, shared cars and improved public transport.”

Other solutions, such as new technologies that are less dependent on critical metals or the use of smaller batteries, are less effective (see figure 2) but also easier to implement.