News of a huge backdown by Labour:

Labour has dropped a radical plan to end the UK’s contributions to climate change by 2030 and will stick to a target of achieving it “well before 2050”.

Activists passed a motion at the party’s conference in September to dramatically speed up the date for net zero carbon emissions – pushing for inclusion in the general election manifesto.

But Barry Gardiner, Labour’s shadow trade secretary, said that 2030 target would apply only to efforts to decarbonise power production.

“What we will be doing is that we will have our power sector 90 per cent powered by renewables by 2030,” he said.

“That is absolutely in line with achieving the overall target that we have set to make sure that, well before 2050, we have achieved the net zero.”

The decision will anger a growing Labour grassroots group, which has announced a campaign to persuade the public to vote for the 2030 target – on the expectation it would be in the manifesto.

The activists believed they had struck an achievable compromise, which spoke of a “path” to net-zero emissions in just 11 years’ time with the support of most trade unions.

However, the key GMB union, which represents workers in the energy sector, remained opposed, fearing rapid timeframe would put jobs in jeopardy.

Many saw the 2030 target as impossible, because it would involve huge intervention to replace fossil fuel power plants and petrol and diesel cars, as well as millions of household gas boilers.

However, Labour’s manifesto is still likely to go far further than the Conservatives’, who have been criticised for setting the 2050 legal commitment without announcing any measures to achieve it.

As well as a dramatic shift to renewable energy, Jeremy Corbyn’s party is expected to eradicate all sales of new petrol and diesel vehicles far quicker than the government’s 2040 date.

So after all of the hot air, all that is basically left is the power sector, with a target to source 90% from renewables by 2030 (by which they presumably mean “low carbon”, given that nuclear will still be used.

Good luck with that! But the electricity sector only accounts for about a tenth of UK emissions, so that will hardly save the planet.

Mrs Merton will be disappointed! 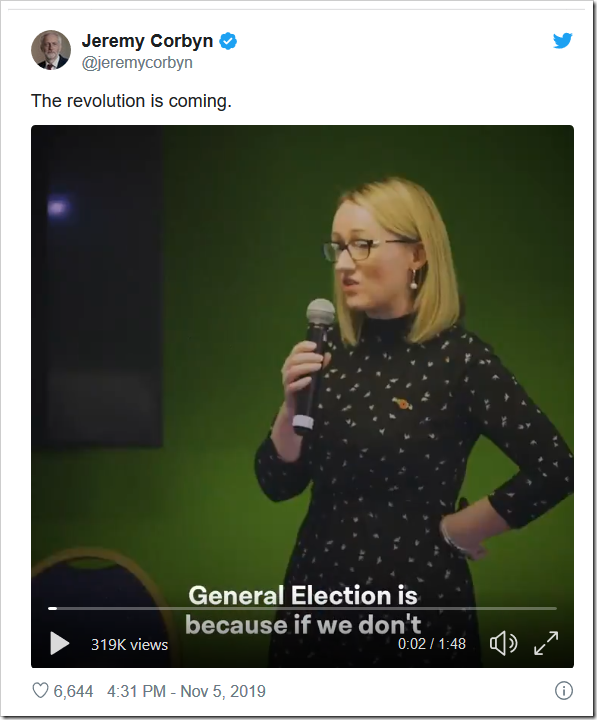 As for the phase out of petrol and diesel cars, it is hard to tell the difference between Labour and Tory policies. Talk of stopping sales by 2040 is just that – talk. Actually doing something about it will, it appears, be left to someone else a long time in the future.

Dinosaurs they may be, but Len McCluskey and his union brethren do know about the real world. It is a pity most of our politicians don’t.