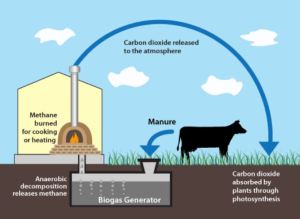 More fantasy economics for imaginary ‘climate solutions’, as we’re treated to another “they would say that wouldn’t they?” routine, reported by Power Engineering International. Here they don’t mention that ‘Biogas is primarily methane (CH4) and carbon dioxide (CO2)‘ – the two main so-called greenhouse gases we’re supposed to be scared of. Sounds even more absurd than burning wood and calling it sustainable, plus we’re told it will require $5 trillion to implement their plan. Probably not a coincidence that the COP 25 climate gabfest is just starting.

Major biogas industry corporations, led by the World Biogas Association (WBA), are calling on the world’s governments to act urgently to unlock the sector’s potential to cut global greenhouse gases emissions by at least 12 per cent within the next 10 years, contributing towards meeting their Paris Agreement targets.

In return, these companies commit to putting their full human, financial and technological resources behind enabling the rapid expansion of biogas in all parts of the globe.

The plea was made through a ground-breaking Biogas and Climate Change Commitment Declaration, WBA noted that it is the first time that a large number of powerful biogas organisations join forces to both demand – and deliver – solutions to address climate change.
. . .
1 Million biogas plants needed by 2030

In its recent report, the Global Potential of Biogas, WBA estimated that the number of industrial plants operating globally are currently 132,000.

By 2030 there needs to be at least 1 million large scale installations (each handling over 100,000 t/pa of feedstock) plus millions of smaller scale digesters, to achieve the emissions reductions targets.

All of these units would enable the biogas industry to prevent 4 billion tonnes of CO2 equivalent from being emitted annually – the equivalent of all the emissions of the EU28 in 2017.

The sector will need to invest some $5 trillion to design, build and operate those plants, but all barriers to those investments existing today must be eliminated if the industry is to achieve its goal.

If deployed to its full potential, WBA estimates that the industry would employ around 10 million people worldwide, from 350,000 currently.