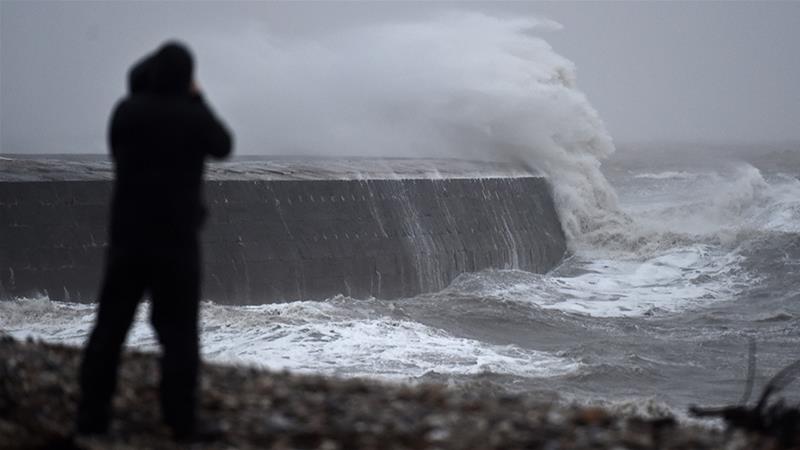 Trains, flights and ferries have been cancelled and weather warnings issued across the United Kingdom as a storm with hurricane-force winds up to 129 km/h (80 mph) battered the region.

A strange new twist in climate science attribution of blame for extreme weather.  From the NewsThump Storm Ciara causing chaos across the nation: is it Meghan’s fault?  Excerpts in italics with my bolds.

Storm Ciara is causing travel and infrastructure chaos across the country and experts are suggesting that this first American sounding storm of the year could be the fault of Meghan Markle, Duchess of Sussex.

“It is certainly conceivable that Meghan has some sort of weather control device that she has used to bring Storm Ciara to Great Britain,” explained Simon Williams, a man in the pub who regularly watches Britain’s Wildest Weather.

“Either that or she’s got strange witchy powers that allow her to control the weather like she controls poor Harry.

“Whichever it is, it’s definitely her fault. I mean, look at the evidence – the storm hits just a few days after they moved to Canada.

“Mark my words, this storm wreaking havoc to the country that was fine till she came along? All Meghan’s fault.”

Popular trumpet of idiocy Piers Morgan was so apoplectic with rage that he simultaneously soiled himself, vomited and bleed from various orifices at the mere mention of the Duchess.

“Meghan. Royals. Arrogant,” he spluttered incoherently before calming down enough to make the following statement.

“Now look, I’m not racist,” said the man who is only angry at the black one.

“But this is what happens when you let people from different cultures into the Royal Family, they don’t really understand the ancient sophisticated British royal way of life, so they go around causing big storms.”

It is expected that the storm could bring further disruption to those communities recovering from last year’s floods.

Which were also definitely Meghan’s fault.