From Donna LaFramboise this morning, who has collated some of the best going, this is my favourite: 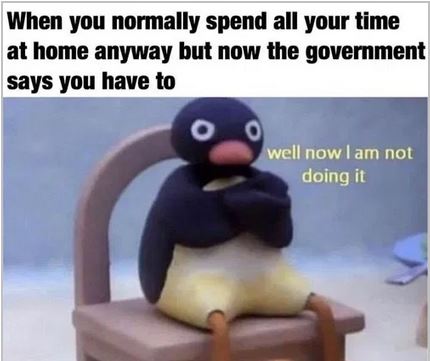 On a more serious note, I also liked this essay about Spanish Flu death rates from last week, “Covid-19 Is Not the Spanish Flu: A widely cited stat about death rates seems to argue otherwise, but it’s surely incorrect. So how’d it end up in the research literature?”

“Both newspapers and scientific journals frequently state three facts about the Spanish flu: It infected 500 million people (nearly one-third of the world population at the time); it killed between 50 and 100 million people; and it had a case fatality rate of 2.5 percent. This is not mathematically possible. Once a pandemic is over and all the numbers are tallied, its case fatality rate is simply the total number of deaths divided by the total number of recorded cases. Each country and city will have its own CFR, but it’s also common to calculate a global average. If the Spanish flu infected 500 million and killed 50 to 100 million, the global CFR was 10 to 20 percent. If the fatality rate was in fact 2.5 percent, and if 500 million were infected, then the death toll was 12.5 million. There were 1.8 billion people in 1918. To make 50 million deaths compatible with a 2.5 percent CFR would require at least two billion infections—more than the number of people that existed at the time.”

The rest is an interesting read that reminded me of my post that debunks the oft-reported false fact perpetuated by the media that ‘Svalbard has more polar bears than people.’