As a weather forecaster, I love being able to break down and forecast extreme and/or noteworthy weather events here in the United States. Tropical cyclones, nor’easters, and Arctic outbreaks are a particular interest of mine. Yet, throughout this very mild winter with very little barotropic instability and surges of cold air in the Lower 48, I have found myself bored as of late. It has been a rinse, wash, and repeat kind of winter with inland Appalachian storm tracks, mild temperatures, and little snowfall for many cities east of the Rocky Mountains, particularly along the east coast, where I dwell.

Now that spring is at our doorstep, severe weather season is about to begin. Of course, with any type of extreme weather that occurs, someone with zero credibility will attempt to link it to man-made climate change. Without any disruption in the Northern Hemisphere polar vortex circulations or any significant winter storms sweeping across the Heartland or east coast, climate change activists have been rather quiet over the last couple of months. With the coronavirus outbreak, many of them have seemingly forgotten that we are allegedly in a climate emergency － whatever that means － and have now shifted their focus to the coronavirus apocalypse. Even so, that hasn’t stopped some journalists from attempting to reinvigorate the global climate breakdown.

In the early morning hours of Tuesday, March 3, a series of tornadoes spawned from a parent supercell － rotating － thunderstorm, touched down in Tennessee resulting in at least 24 fatalities and hundreds of injuries.¹ Among the ten reported across Tennessee (Figure 1), seven of them struck the middle of the state and the two worst struck the Nashville area at velocities of 60 to 70 miles per hour (mph).² 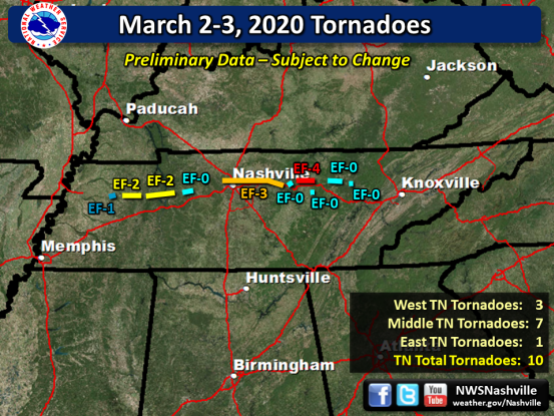 The Nashville and Cookeville Tornadoes 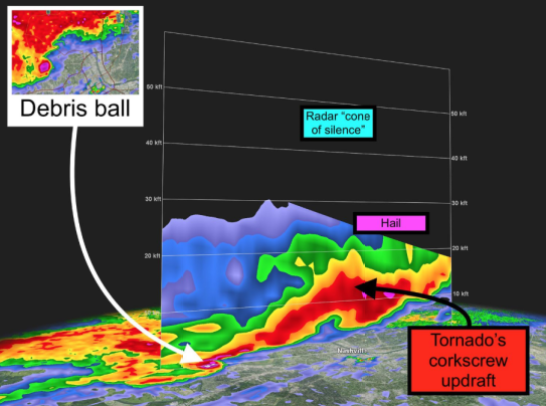 Just as the tornado was ravaging the airport － where damages are estimated to be over $90 million － the National Weather Service issued a tornado warning.¹ Earlier that evening, the weather service had issued tornado watches, but they were dropped due to a lack of damage reports, according to Mike Rose, a meteorologist.¹ The EF-3 tornado of 165 mile per hour (mph) winds went on to plow through the heart of Music City before dissipating just south of Interstate 40; it traveled 60.13 miles (Figure 3).² 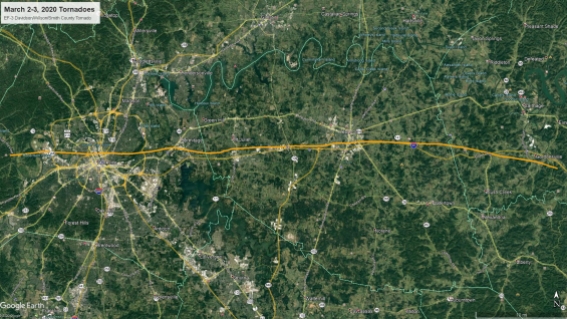 The stronger tornado was an EF-4 which caused considerable damage to Putnam County between Baxter and Cookeville, Tennessee on a 8.21 mile path (Figure 4).² Fortunately, the tornado rapidly came to an end just before entering downtown Cookeville.² 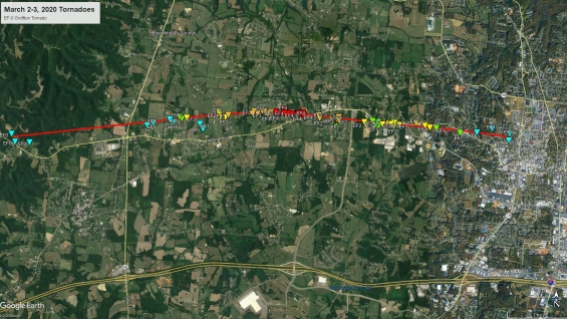 Did Climate Change Play A Role?

Despite the mainstream media’s widespread coverage of the Tennessee tornadoes, most of their pieces didn’t mention climate change being a factor in the severity of the tornado outbreak. I was honestly surprised. Even so, this didn’t stop some. David Wallace-Wells, an editor and climate columnist for New York Magazine, Tweeted,

I’m not aware of any studies that have investigated tornado path lengths in relation to global warming, but I’m going to assume that David is just making things up. Given the complex and small-scale nature of tornadoes and their parent supercell thunderstorms, which require a variety of crucial meteorological and environmental parameters such as instability, moisture, lift, and wind shear, and vary considerably at the mesoscale level on the order of seconds to minutes, or and even occasionally hours, it would be very tough to attribute climate change to tornado path length changes, let alone, tornado frequency assuming there have been any.

“Climate models cannot resolve tornadoes or individual thunderstorms. They can indicate broad-scale shifts in three of the four favorable ingredients for severe thunderstorms (moisture, instability and wind shear), but as any severe weather forecaster can attest, having some favorable factors in place doesn’t guarantee tornadoes. Our physical understanding indicates mixed signals–some ingredients may increase (instability), while others may decrease (shear), in a warmer world. The other key ingredient (storm-scale lift), and to varying extents moisture, instability and shear, depend mostly on day-to-day patterns, and often, even minute-to-minute local weather.”

Just for some rational thought, the longest path ever carved by a tornado was 218 miles long during an EF-5 tornado associated with the Tri-State Tornado Outbreak of March 18, 1925. That particular tornado was on the ground for 3 hours and 37 minutes. Did global warming play a role in that tornado outbreak? Probably not.

As far as Tornado Alley is concerned, the study he was alluding to (Gensini and Brooks, 2018) did not specifically state that [man-made] climate change was responsible for the eastward shift of Tornado Alley. Rather, the study found: 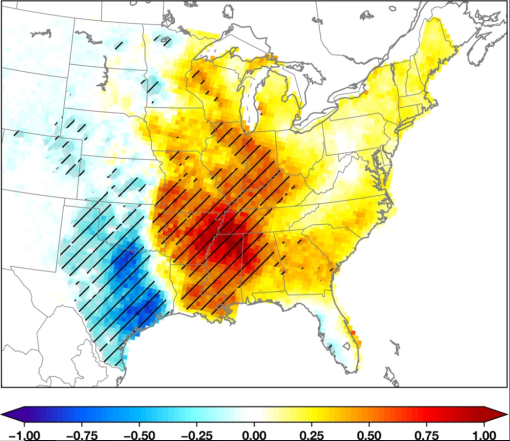 Figure 5. While the most tornadoes reported in the U.S. still occur in the Plains, there has been a slight decline in the frequency with a larger increase relative to what is considered “normal” along the Mississippi River. － Gensini and Brooks (2018).

The study also concluded that there is a lot of uncertainty regarding whether anthropogenic forcing of the climate system or natural internal variability may be driving these changes:⁴

“At this point, it is unclear whether the observed trends in tornado environment and report frequency are due to natural variability or being altered by anthropogenic forcing on the climate system.“

So, it is clearly evident that Wallace-Wells didn’t actually read the study. If he had done so, he would have accurately reported what the author’s explicitly stated in the paper. I’m not surprised, however, this inaccurate representation of findings in climate studies has unfortunately become a commonplace in mainstream journalism.

There is also evidence that the timing of tornado season has shifted as well, however, causes of this shift is once again unknown. Is it natural variability? Is it man-made climate change? Is it both? Nobody has a clue. A study published in the Geophysical Research Letters (GRL), Long and Stoy (2014), found that peak tornado activity within Tornado Alley has become earlier by approximately seven days over the last 60 years (Figure 6).⁵ 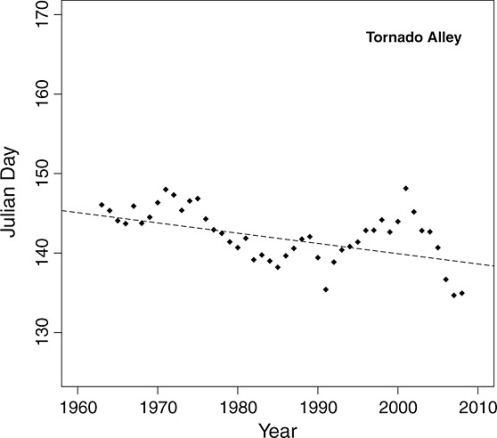 Figure 6. “Plot of peak tornado activity for the heart of Tornado Alley. The Julian day that corresponds to peak tornado activity plotted for each 10 year moving window by variable type for the region, with linear trendlines. The years on the x axis represent the last year of the associated 10‐year moving average (e.g., 1963 represents 1954–1963).” － Long and Stoy (2014).

As far as actual United States tornado frequency trends are concerned, there has been little change in EF-1 to EF-5 tornadoes since relatively good records began in the 1950s (Figure 7). 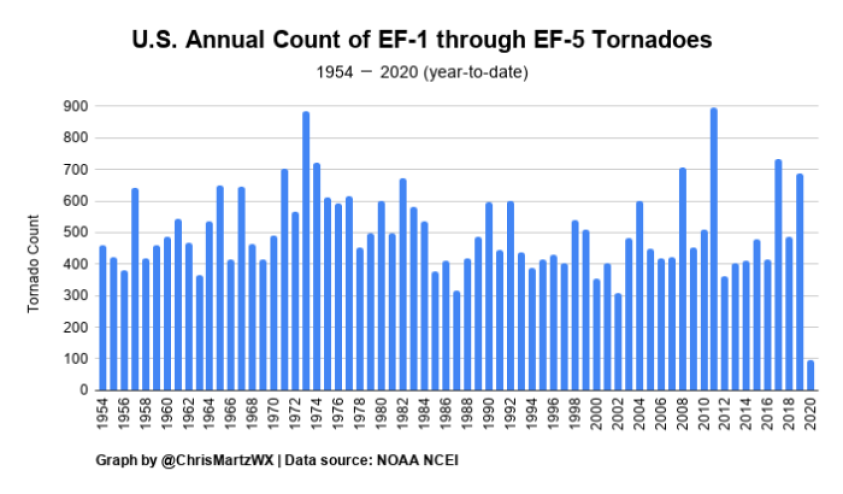 Violent tornadoes, which are rated as EF-4 or EF-5 on the Enhanced Fujita Scale, have been on a noteworthy decline over the last several decades (Figure 8). In fact, 2018 was the first year on record with no reported violent tornadoes.

I contacted Dr. Roy Spencer, a principle research scientist at the University of Alabama in Huntsville, and he affirmed what the statistics show:

“The incidence of strong to violent tornadoes in the U.S. has gone down 50% since statistics began in the 1950s. The limiting factor in strong tornado formation is a cold air mass, not warmth, otherwise the tropics would be filled with tornadoes, which is not the case.“ 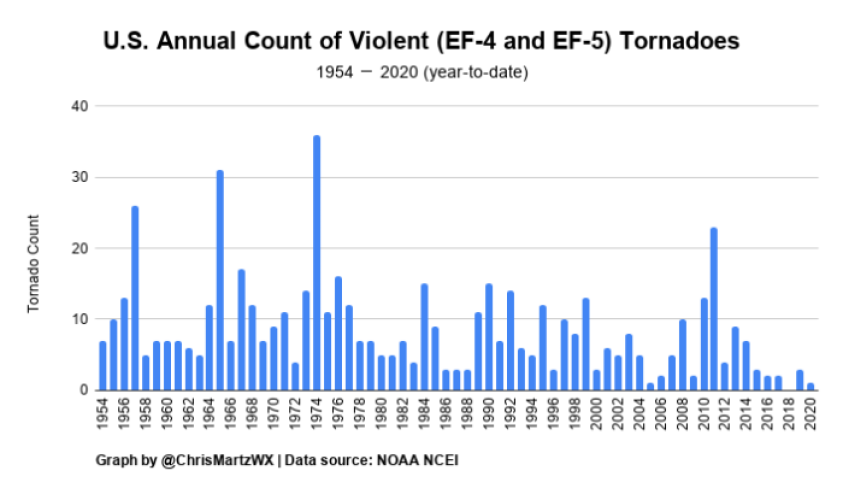 In order to get a more accurate, but not perfect, representation of United States tornado climatology, I disregarded EF-0 tornadoes from the dataset. My reasoning behind this is because tornado reports have increased substantially over the last several decades due to over a doubling of Great Plains population since 1950, and therefore increased public awareness; more photographic evidence and video footage; the introduction of NEXRAD Doppler radar in the 1990s; and an overall increased effort to document tornadoes for both meteorological analysis and climate studies. Tornadoes of EF-1 intensity, and especially EF-2 and higher, are the most likely to be documented with fairly consistent accuracy since the mid-1950s and early-1960s.

“Since 1920, the number of tornadoes reported annually in the United States has increased by an order of magnitude, but this increase reflects greater effectiveness in collecting tornado reports (Doswell and Burgess, 1988; Grazulis, 1993; Grazulis et al., 1998). On the other hand, severe tornadoes are not easily overlooked. Restricting the analysis to very strong and violent tornadoes results in a much different assessment (Figure 2.38) showing little long-term change, though some years like 1974 show a very large number of tornadoes.“

“A particular challenge in quantifying the existence and intensity of these events arises from the data source: rather than measurements, the occurrence of tornadoes and severe thunderstorms is determined by visual sightings by eyewitnesses (such as “storm spotters” and law enforcement officials) or post-storm damage assessments. The reporting has been susceptible to changes in population density, modifications to reporting procedures and training, the introduction of video and social media, and so on. These have led to systematic, non-meteorological biases in the long-term data record.”

As an aspiring meteorologist myself, I am by no means a denier of man-made climate change. Indeed, I am in solid agreement with almost every scientist that mankind is responsible for at least some of the warming observed globally since around 1950.

While I do not think climate change is a serious threat to humanity, I do think it’s a serious issue that needs to be discussed within the scientific community. One of the things I love about science is being able to debate things, do research, and explore the unknown.

Extreme weather has always been around as long as documentation, official or unofficial, goes back. Ridiculous and/or sometimes extreme claims made by a select few scientists, politicians, and even on occasion, the media is usually based on climate model projections, not actual real-world observations. Those who choose blame every single weather event, or so it seems, on man-made climate change are not only a roadblock for the progress of our scientific understanding of the issue, they’re just practicing a scientifically meaningless self-fulfilling prophecy.