The UK has experienced its sunniest spring since records began in 1929, the Met Office has said.

It is also set to be the driest May on record for some parts of UK, including the driest in England for 124 years.

Some areas are already warning of drought conditions despite exceptionally wet weather and flooding earlier in the year.

But there are no plans for hosepipe bans yet, according to the water industry trade body Water UK.

The UK spent much of spring in lockdown due to the coronavirus pandemic, but thousands flocked to beaches last week to enjoy the sun following a slight easing of restrictions in England.

Only nine springs on record have topped 500 hours of sunshine but, by Wednesday, the UK had clocked up 573 hours.

While the Met Office’s full figures will not be available until Monday, the village of Benson in Oxfordshire is likely to have been the driest place, with "no measurable rain" falling in their rain bucket, BBC Weather meteorologist Matt Taylor said.

Explaining the prolonged sunny weather, he said the jet stream – strong winds driving much of the UK’s variable weather – was largely anchored to the north of the UK during spring. That allowed high pressure to build, whilst the rainy low pressure systems stayed out in the Atlantic.

"Some scientists say these ‘stalled’ weather patterns are a result of climate change and the warming that is taking place in the Arctic region could lead to more extreme weather events in future," he said.

Prof Liz Bentley, chief executive of the Royal Meteorological Society, said the swing from record-breaking wet weather to the months of sunshine was "unprecedented" and "concerning" because it showed how much the UK’s climate was changing.

As usual with these events, the Met Office has jumped the gun, as they don’t yet even have the data for May.

But let’s examine the claim that “these ‘stalled’ weather patterns are a result of climate change and the warming that is taking place in the Arctic region”. The usual BBC tactics – “some scientists say”, “could”. Of course, it is now what scientists say that matters. It is what the data says.

And when we look at UK spring rainfall since 1862, there is quite simply no trend at all:

Indeed, it is absolutely clear that spring rainfall has been far less extreme in the last three decades, at both ends of the scale.

If there was any truth of stalled weather patterns, we would surely see that reflected in the record to date, regardless of this year’s data.

As for Arctic warming, I would ask what “warming” they are talking about: 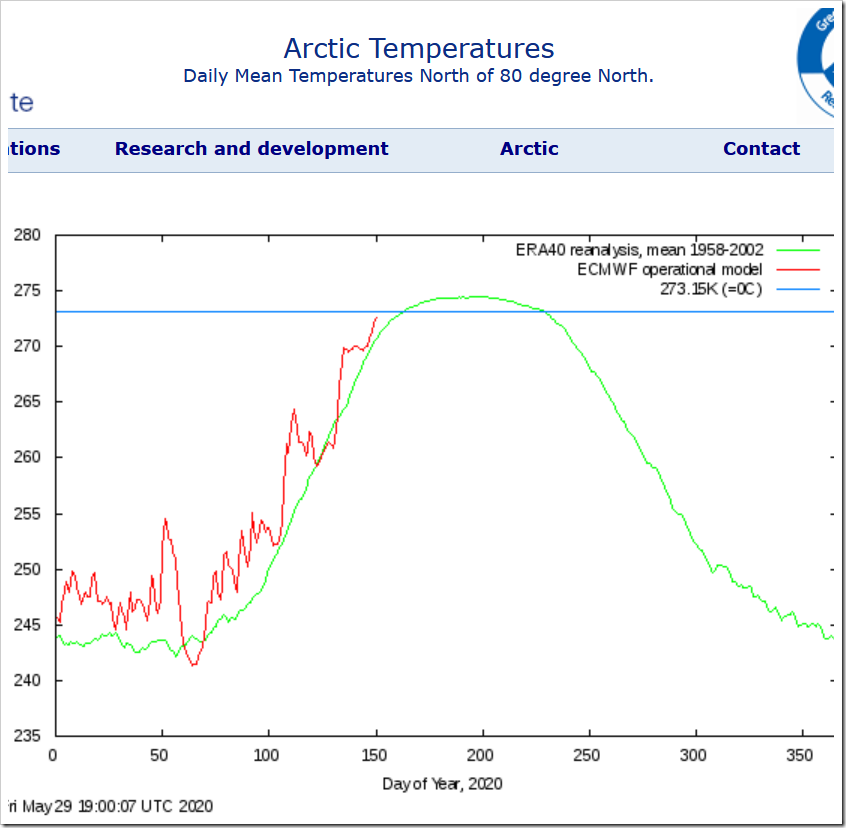 As for the allegation that there is something unusual about the swing from a wet February to a dry spring, history tells us that British weather often changes from one extreme to another.

For instance, the graph above shows how 1979 was the second wettest spring on record. Yet the following spring was the sixth driest.

And back in 1947, England had just had the second coldest winter of the century, only to experience the wettest March.

In fact, as the Met Office themselves are fully aware, there is no need to invoke the Arctic warming bogeyman. As they explained in their 3-month outlook this month, the predominance of high pressure at this time of year is linked to below average sea surface temperatures in the North Atlantic:

Now you won’t read that on the BBC!