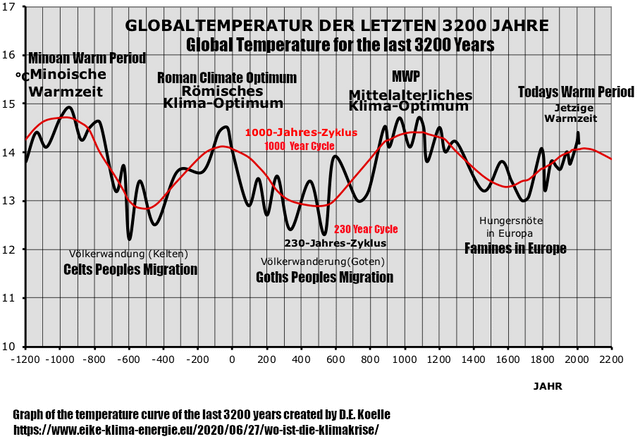 Dr. D.E. Koelle published in EIKE, here in English translation: Where’s the “climate crisis”? Excerpts in italics with my bolds.

Today it can be found in the brains of (unfortunately too many) people who have a pronounced ignorance of climate – what it is and what it meant in the past.

But unfortunately there are also incomprehensible statements by “climate experts” who should actually know better. The GEOMAR staff member Prof. Dr. Katja Matthes and his designated chief, in a mirror interview (in issue 21/2020) on the climate issue under the obviously inevitable title “Corona crisis as an opportunity” states that the climate is “dramatic”. And that only a reduction in CO2 emissions and even its “artificial” removal from the atmosphere is necessary to limit a further temperature increase of 1.5 or 2 ° C. This means that, in accordance with the IPCC dogma, it sees only CO2 as a climate factor and ignores all other climate influencing factors, especially the natural climate fluctuations that have occurred for millions and thousands of years.

In any case, there is no factual reason for a “climate drama” – quite the contrary: in the past (before the existence of mankind) there were repeated temperature fluctuations between 0 ° C and 28 ° C – today we are around 14.5 ° C – exactly in the middle between the extremes, ie it couldn’t be better. Today we have the best possible, the optimal climate, as the Wikipedia diagram shows:

Figure 2: The temperature history of the earth in the past 500 million years. It shows tremendous climate change in the past (without people !!) and a perfect mean temperature with fluctuations of only ± 1 ° C in the past 10,000 years. It couldn’t be better.

What happened that such a climate hysteria could occur, as it was spread in the media in competition – from CO2 as a “climate killer” to “climate catastrophe” and “doomsday”?

The global temperature has actually increased by 1 ° C in the last 100 years! A degree C. Incredible!

Only very simple types can believe or expect that nature can / must deliver the exact same temperatures every year. There are about a dozen climate-influencing factors: long-term, medium-term and short-term, only CO2 is not one of them. There is no evidence of this in Earth’s climate history. Rather, the reverse applies:

Global warming increases the CO2 level in the atmosphere through outgassing from the oceans. Warmer water can store less CO2. And since it is known that 50 times more CO2 is stored in the oceans than in the atmosphere today, this effect has often occurred in the past. Apparently some people have mixed up here.

Climate change, perceived primarily as temperature fluctuations, is by no means a new phenomenon caused by humanity (CO2 emissions), as some climate charlatans and ideologists want to make us believe (in their fight against capitalism and industrial society), but a completely normal natural phenomenon of our planet since its existence, just like earthquakes and volcanic eruptions – and no one can do anything about it! The “fight against climate change” is reminiscent of Don Quixote.

In the past 8000 years, the mean global temperature has fluctuated regularly by +/- one degree C (Eddy cycle of approx. 1070 years).

And that was as much the case 8,000 years ago as it is today! There is no recognizable anthropogenic influence. On the contrary: The regular temperature maxima of the Eddy cycle have fallen by 0.7 ° C since the Holocene maximum 8000 years ago, despite the continuous increase in CO2 from 200 to 400 ppm, which according to the IPCC hypothesis is an increase around + 3 ° C should have resulted. The IPCC, which has propagated the CO2 hypothesis, has so far been unable to provide any factual or historical evidence for it – other than “confidence”. This confirms that the IPCC is not a scientific, but a political institution where scientists are misused for ideological and political goals. His reports must e.g. Before publication, be checked by the participating governments and modified according to their wishes. A process that only exists in climate research, which has largely lost its formerly scientific character.

The above temperature diagram of the last 3200 years clearly shows the dominance of the natural 1000-year cycle, as it has occurred for at least 8000 years. We have just passed the last maximum and in the future it will go down again (if astrophysics has not changed) and is completely independent of the evolution of CO2. This has doubled in the last 8000 years from 200 to 400 ppm, but the temperature of the maxima has decreased by 0.7 ° C (instead of rising by 3 ° C according to the IPCC theory!). In fact, the current CO2 level is among the lowest in the history of the earth, which reached values ​​of 4000 to 6000 ppm several times – without causing damage – only much stronger plant growth. We owe this to the coal deposits on earth. If CO2 is released by combustion today, it is nothing more than the CO2 that the plants then extracted from the atmosphere.

Note: I used an online translate utility for this English text, so blame any errors on Mr. Google.

2 thoughts on “What Climate Crisis?”