I have occasionally posted about the State Climate Extremes Committee in the US, which verifies and maintains data on record meteorological observations on a State by State basis.

Unlike the Met Office, the SCEC is extremely diligent in checking new claims for record temperatures, daily rainfall and so on, including site visits and rigorous checking. Details of how they operate is here.

One particular requirement is this:

One wonders whether the SCEC would approve a rainfall record half way up a mountain! (Or for that matter a record low temperature). We actually do not have to wonder, because the list of records shows this not to be the case. Whilst there are some records in highland areas, these all appear to be in habited locations.

Below is the distribution of record high temperatures, and I think most of us are familiar with the preponderance of records in the 1930s. Remember, these numbers include ties, so from a statistical point of view should be evenly distributed across time. (Ties, by the way, on the same day are not counted). 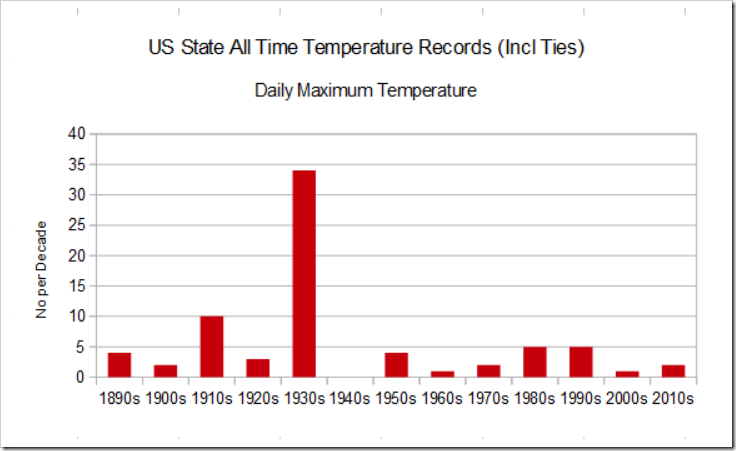 Handily, Electroverse have written a transcript of these records:

Back on July 10, 1913, Greenland Ranch, now Furnace Creek Ranch, in California’s Death Valley peaked at a scalding 134F (56.7C) — a temp that to this day remains the United States’ hottest on record.

1898 is the record-holder for Oregon. The mercury hit 119F (48.3C) twice that year— in Prineville, and in downtown Pendleton.

This raw data speaks for itself — the United States was hotter in the past.