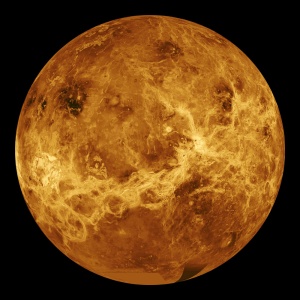 The presence of sulphur in the atmosphere hinted at this.
– – –
A new study identified 37 recently active volcanic structures on Venus, reports Phys.org

The study provides some of the best evidence yet that Venus is still a geologically active planet.

A research paper on the work, which was conducted by researchers at the University of Maryland and the Institute of Geophysics at ETH Zurich, Switzerland, was published in the journal Nature Geoscience on July 20, 2020.

“This is the first time we are able to point to specific structures and say ‘Look, this is not an ancient volcano but one that is active today, dormant perhaps, but not dead,’” said Laurent Montési, a professor of geology at UMD and co-author of the research paper. “This study significantly changes the view of Venus from a mostly inactive planet to one whose interior is still churning and can feed many active volcanoes.”

Scientists have known for some time that Venus has a younger surface than planets like Mars and Mercury, which have cold interiors.

Evidence of a warm interior and geologic activity dots the surface of the planet in the form of ring-like structures known as coronae, which form when plumes of hot material deep inside the planet rise through the mantle layer and crust. This is similar to the way mantle plumes formed the volcanic Hawaiian Islands.

But it was thought that the coronae on Venus were probably signs of ancient activity, and that Venus had cooled enough to slow geological activity in the planet’s interior and harden the crust so much that any warm material from deep inside would not be able to puncture through.

In addition, the exact processes by which mantle plumes formed coronae on Venus and the reasons for variation among coronae have been matters for debate.