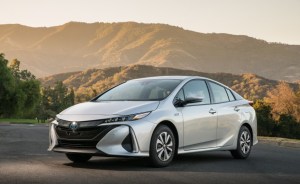 They say solid-state batteries – unlike lithium-ion ones – can’t catch fire, but on the other hand the electrolyte needs to be warmed up. Years of technical challenges still lie ahead, it seems.
– – –
A team of researchers from Kyoto University and Toyota Motor is making solid progress developing next-generation battery technology that has the potential to cram far more energy into a small, lightweight package than today’s standard lithium-ion, or li-ion, batteries, says Nikkei Asian Review.

The new fluoride-ion battery the researchers are working on, which would hold about seven times as much energy per unit of weight as conventional li-ion batteries, could allow electric vehicles to run 1,000 km on a single charge.

The team has developed a prototype rechargeable battery based on fluoride, the anion — the negatively charged ion — of elemental fluorine.

A fluoride-ion battery, or FIB, generates electricity by shuttling fluoride ions from one electrode to the other through a fluoride-ion-conducting electrolyte.

The researchers have confirmed that the prototype has a higher theoretical energy density, potentially giving it a range up to seven times longer than today’s li-ion batteries.

The ranges of electric vehicles have increased significantly over the years, due to improvements in li-ion battery performance and deceleration energy recovery systems, which recharge the battery using electricity generated by braking.

Some of the latest EV models from Tesla and Nissan Motor, for instance, can run up to 600 km per charge under ideal conditions. But experts say there is a theoretical limit to the energy density of li-ion batteries, which means their range cannot be extended much further.

The researchers at Kyoto University and Toyota have turned to the FIB because of its theoretically higher energy density. This translates to smaller, lighter batteries with same performance as li-ion cells, or, if they were made the same size and weight as today’s li-ion batteries, could put out juice for longer between charges.

The researchers have gone for a solid electrolyte in place of the liquid ones typically used in li-ion batteries. One key advantage of such solid-state batteries is that they cannot catch fire, which means engineers do not have to worry about creating systems to prevent overheating.

The researchers are betting that a solid-state FIB battery can solve the puzzle of building an EV that can run 1,000 km on a single charge. Many experts remain skeptical, however.