This story has been doing the rounds around all of the gullible media, it seems.

Greenland’s ice sheet is the second largest body of ice in the world, but global warming has been causing it to melt rapidly in decade prior to now. Despite efforts to halt the heating of the planet, such as the Paris Climate Agreement, climate work has seemingly proved futile, and experts warn it may now be too little, too late.

Research from the Ohio State University Byrd Polar and Climate Research Center reviewed Greenland’s ice sheet over the last 40 years and found that the ice is melting much faster than it has a chance to recover.

The study also found that if global warming was miraculously solved today, it would still be too late for the ice sheet.

Michalea King, the study’s lead author, said: "What we’ve found is that the ice that’s discharging into the ocean is far surpassing the snow that’s accumulating on the surface of the ice sheet."

Ian Howat, a glaciologist and co-author on the paper, added: "Glacier retreat has knocked the dynamics of the whole ice sheet into a constant state of loss.

"Even if the climate were to stay the same or even get a little colder, the ice sheet would still be losing mass."

The ice covering Greenland is up to three kilometres thick in certain places, covering an area seven times the amount of the UK. If all of this ice were to melt, it would cause sea levels to rise by a staggering seven metres, which could have major implications for the UK.

According to the latest study, all the ice on Greenland could melt by the year 3000.

It will now gain mass only once every 100 years, and if all the ice melts, it would push sea levels up by roughly six metres.

As usual, the wording of the media reports is nearly identical, unsurprising because they are all quoting from the University press release.

However, the actual study says something quite different:

The Greenland Ice Sheet is losing mass at accelerated rates in the 21st century, making it the largest single contributor to rising sea levels. Faster flow of outlet glaciers has substantially contributed to this loss, with the cause of speedup, and potential for future change, uncertain. Here we combine more than three decades of remotely sensed observational products of outlet glacier velocity, elevation, and front position changes over the full ice sheet. We compare decadal variability in discharge and calving front position and find that increased glacier discharge was due almost entirely to the retreat of glacier fronts, rather than inland ice sheet processes, with a remarkably consistent speedup of 4–5% per km of retreat across the ice sheet. We show that widespread retreat between 2000 and 2005 resulted in a step-increase in discharge and a switch to a new dynamic state of sustained mass loss that would persist even under a decline in surface melt.

So all they have found is that ice melt speeded up between 2000 and 2005, not exactly something we did not know about.

But the paper goes on:

The Greenland Ice Sheet (GrIS) has been losing mass for several decades1 due to both increased surface meltwater runoff and ablation of marine-terminating outlet glaciers via calving and submarine melting, termed ice discharge…..

We find that GrIS-wide discharge is now ~14% greater than the rate observed during 1985–1999, following an observed step-increase during the early 2000’s.

Following the step-increase in discharge, GrIS-wide totals have remained relatively stable at rates near 495–500 Gt yr−1, reflecting an increase that was sufficient to effectively shift the ice sheet to a state of persistent mass loss. 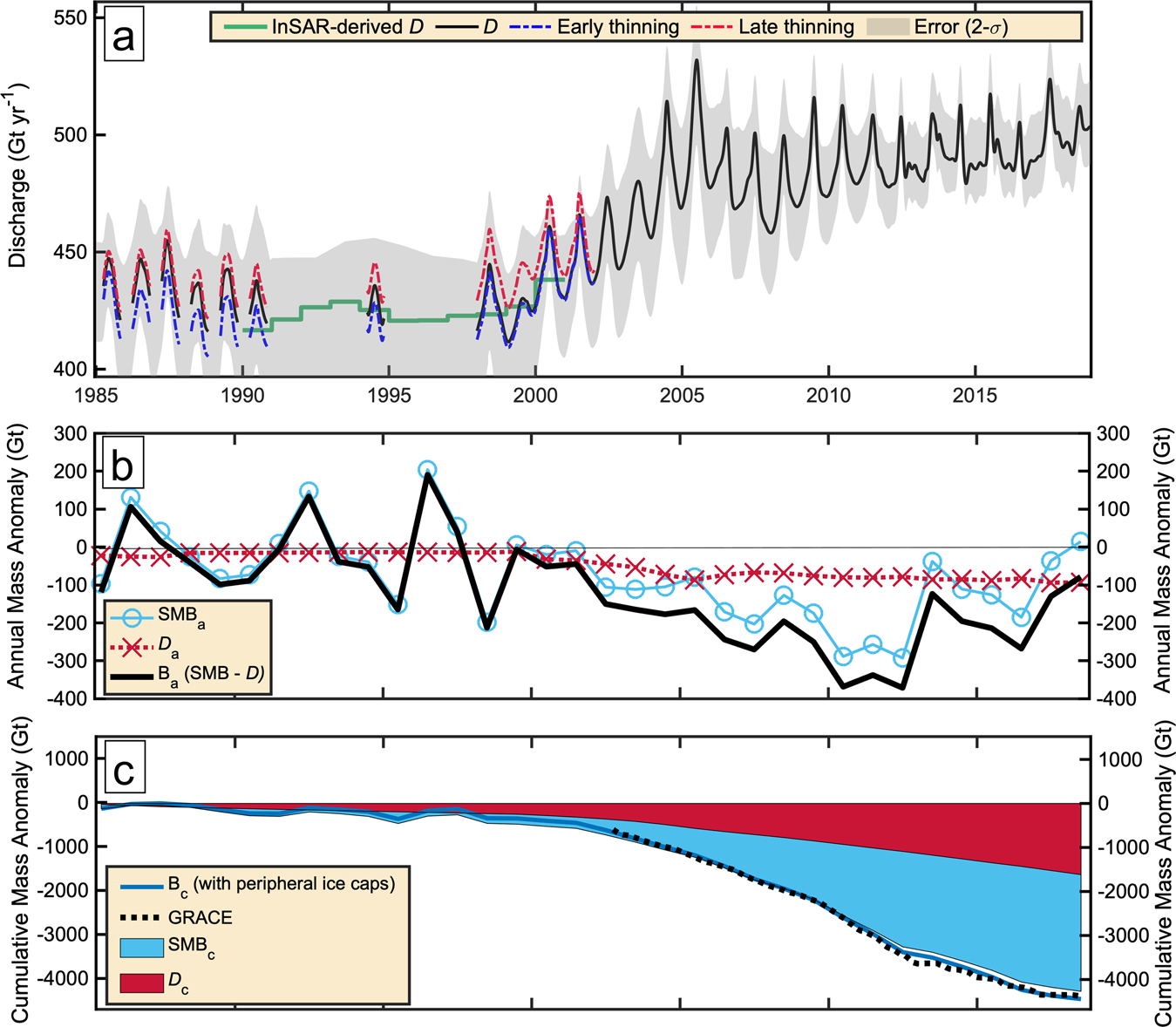 In other words, ice sheet loss stopped accelerating around 2005. Ice mass loss of 500 Gt a year may sound a lot, but Greenland’s ice sheet weighs about 2.6 million Gt.

While there has been a small retreat of glaciers, the state of the bulk of the ice sheet at higher and colder altitudes is much more stable, as temperatures rarely get above zero. Here the key factor is snow downput.

The paper does go on to say:

In all regions except the SE, outlet glacier thinning was due, at least in part, to glacier discharge exceeding the long-term balance flux, indicating dynamic disequilibrium associated with a longer-term retreat. This is consistent with the retreat of these glaciers earlier in the 20th century

This acknowledges the fact that glacial retreat began long before the 21stC, and what we are seeing is simply part of a process which began at the end of the Little Ice Age, an era which has been described as the coldest in Greenland since the Ice Age.