Anthony Watts has a good round up of some of the climate doomsday forecasts that never materialised: 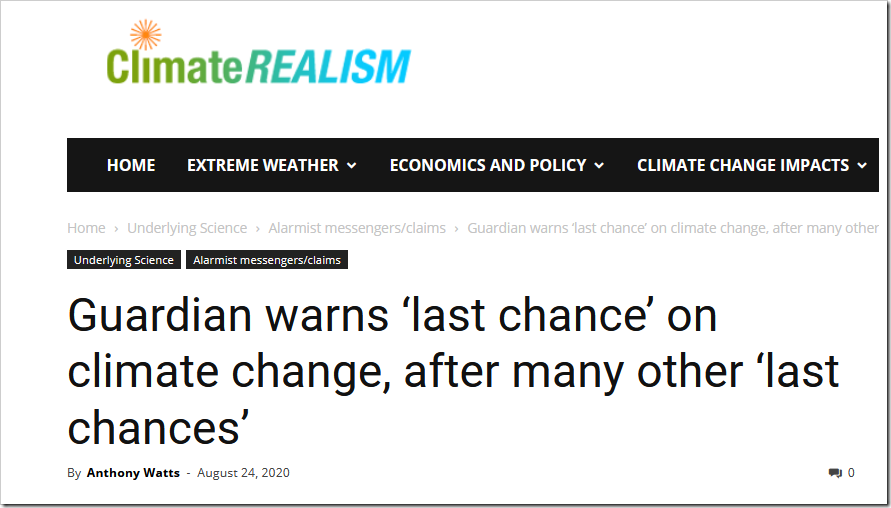 If we do not heed this latest last chance, I’m sure there will be another last chance in the near future, just like all the previous last chances we’ve been given in the past 30 years.

The Observer view on the climate catastrophe facing Earth

Thirty years ago we were warned. Now is our last chance to listen

Thirty years ago this week, the population of Earth was given official notification that it faced a threat of unprecedented magnitude. Emissions of carbon dioxide and other greenhouse gases, spewed into the atmosphere from factories and vehicles burning fossil fuels, were pinpointed, definitively, as triggers of future climate change. Melting icecaps, rising sea levels and increasing numbers of extreme weather events would be the norm for the 21st century unless action were taken, warned the authors of the first assessment report of the Intergovernmental Panel on Climate Change (IPCC).

Three decades later, it is clear that we have recklessly ignored that warning.Fossil fuels still supply 80% of the world’s energy, carbon dioxide levels in the atmosphere continue to rise and global temperatures are still increasing. According to Met Office statistics, there was a 0.14C increase in global temperatures in the decade that followed publication of the first assessment report. This was then followed by a 0.2C increase in each of the following two decades. The world could easily heat by 3C by the end of the century at this rate, warn scientists.

The impact on the world will, by then, be catastrophic. …

In case you think this is really the “last chance”, here are some previous last chances for your entertainment.

The Grandaddy of Climate Last Chances? In 1989 the United Nations gave us 10 years to save the world. WUWT celebrated the 30th anniversary of this 10 year warning last year.

A senior U.N. environmental official says entire nations could be wiped off the face of the Earth by rising sea levels if the global warming trend is not reversed by the year 2000. …

A Global Warming Treaty’s Last Chance. That teetering edifice that is the Kyoto Protocol gets some emergency repair work this week as delegates from 180 countries gather in Bonn to work out problems that threaten to scuttle the deal altogether.