Ben Pile writes at Spiked The problem in California is poverty, not climate change. Excerpts in italics with my bolds.

The heatwaves and the fires are natural – the electricity blackouts are not.

Events leading up to today’s power cuts follow a bizarre history. The fact that advanced economies need a continuous supply of power is well understood. Yet for three decades, the political agenda, dominated by self-proclaimed ‘progressives’, has put lofty green idealism before security of supply and before the consumer’s interest in reasonable prices. Even if the heatwaves experienced by California were caused by climate change, are their direct effects worse than the loss of electricity supply?

California’s green and tech billionaires, and its business and political elites, certainly seem to think so. But they are largely protected from reality by vast wealth, private security, gated estates, and battery banks. The high cost of property in the state of California means that, despite being the fifth largest economy in the world, and with the sixth highest per capita income in the US, it is the worst US state for poverty. According to the US Census Bureau, around 18 per cent of Californians, some seven million people, lived in poverty between 2016 and 2018 – more than five per cent above the US average.

As well as being the greenest (and most poverty-stricken) state, California can also boast that it is the No1 state for homelessness.

According to the US Interagency Council on Homelessness, there are more than 151,000 homeless people in California – a rise of 28,000 since 2010. That figure is shocking enough, but it masks the reality of many thousands more moving in and out of homelessness. The same agency reports that more than a quarter of a million schoolchildren experienced homelessness over the 2017/18 school year.

It is degenerate politics, not climate change, that presses hardest on the millions of Californians who live in poverty, and the many millions more who live just above the poverty line. The problems of this degenerate politics are visible, on the street, chronic and desperate, whereas climate change, if it is a problem at all, is only detectable through questionable statistical techniques. Yet California’s charismatic governors, since Arnold Schwarzenegger, have made their mark on the global stage as environmental champions.

At the 2017 COP23 UNFCCC conference in Bonn, Germany, then governor Jerry Brown shared a platform with the green billionaire and former New York mayor, Mike Bloomberg, to announce ‘America’s Pledge on Climate’ – a commitment of states and cities to combat climate change – despite President Trump’s decision to withdraw the US from the Paris Agreement earlier that year.

California was the experiment, and now it is the proof: environmentalism is worse for ‘social justice’ than any degree of climate change is.

What about the wildfires? Aren’t they proof of climate change? It is a constant motif of green histrionics that more warming means more fires. But as has been pointed out before on spiked and elsewhere, places like California have long suffered from huge fires; fire is a part of many types of forests’ natural lifecycle.

What California’s rolling blackouts and its uncontrolled fires tell us is that green politics is completely divorced from any kind of reality. Environmentalism is the indulgent fantasy of remote political elites and their self-serving business backers. If California doesn’t prove this, what would? 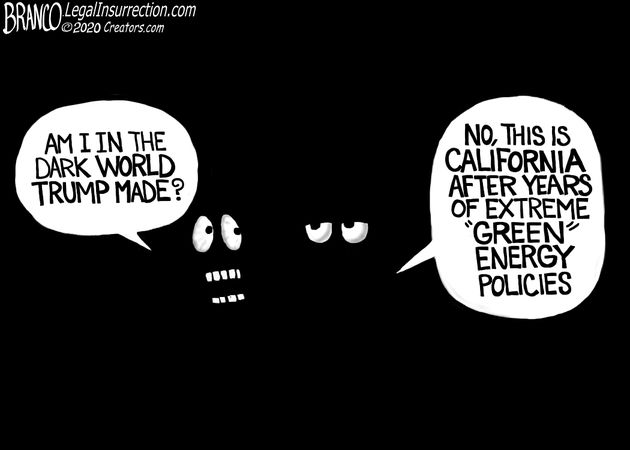