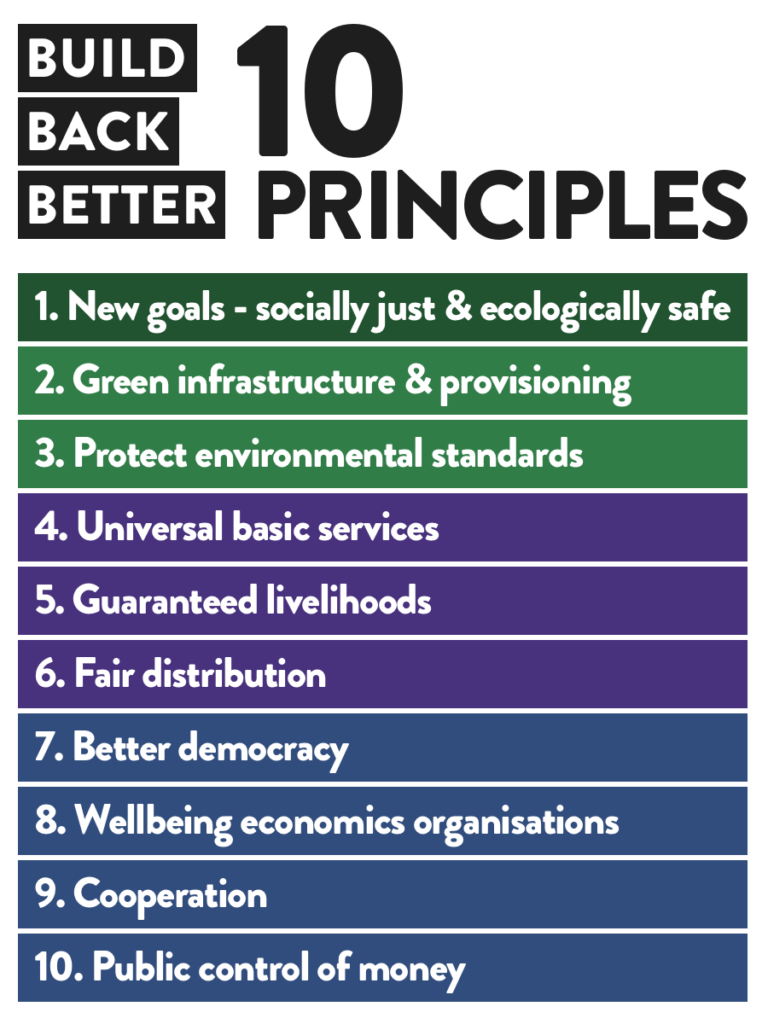 We keep being told we need to Build Back Better. But what does it actually mean?

After World War II, of course, it was all very straightforward. Towns that had been bombed off the map needed rebuilding, so it made sense to build new houses to much better standards than before and modernise factories and infrastructure. The opportunity was also taken to improve public services, such as health and education.

But that is not the case today. We have an economic base which a year ago provided the goods and services the public wanted and by and large was perfectly viable. Whilst this has obviously been disrupted by COVID lockdowns, there is no reason why it cannot resume as normal when the current crisis is resolved, as long as funding is available to cover the temporary COVID related loss of income.

Ignoring the far left demands made by the likes of Wellbeing Economy, we are essentially left with what is often termed a “Green New Deal”. Surprisingly perhaps, the OECD has endorsed the concept:

For the economic recovery from the COVID-19 crisis to be durable and resilient, a return to ‘business as usual’ and environmentally destructive investment patterns and activities must be avoided. Unchecked, global environmental emergencies such as climate change and biodiversity loss could cause social and economic damages far larger than those caused by COVID-19. To avoid this, economic recovery packages should be designed to “build back better”. This means doing more than getting economies and livelihoods quickly back on their feet. Recovery policies also need to trigger investment and behavioural changes that will reduce the likelihood of future shocks and increase society’s resilience to them when they do occur. Central to this approach is a focus on well-being and inclusiveness. Other key dimensions for assessing whether recovery packages can “build back better” include alignment with long-term emission reduction goals, factoring in resilience to climate impacts, slowing biodiversity loss and increasing circularity of supply chains.

The danger, of course, is that their policies may actually prevent getting economies and livelihoods quickly back on their feet.

So what might we expect from such a Green Deal? The Committee on Climate Change (CCC) and National Infrastructure Commission (NIC) have made it pretty clear:

The problem is that all of this costs money, an awful lot. An average household, for instance, would have to spend upwards of £10,000 to install a heat pump, while hydrogen costs three times as much as natural gas to produce. On top of that, the CCC estimate that converting the nation’s appliances from gas to hydrogen could cost another £100bn.

Electric cars are to be forced upon us, even though they are totally unfit for purpose for most drivers. Car manufacturers will have to spend tens of billions retooling, money which they have not got, while taxpayers will have to fund billions more on charging points.

And the electrification of transport and heating will necessitate the digging up and upgrading of the country’s electricity cables, which will be unable to cope with the increased demand.

The NIC have estimated that their plans to decarbonise the electricity grid will add £16bn a year to our bills by 2030. And according to the CCC, getting to Net Zero will cost £50bn a year by 2050.

Which all raises the question – where will this money come from? Far from helping with the recovery, it will end up being a massive drain on the economy.

It is claimed, of course, that a Green Deal will create hundreds of thousands of new jobs. But this is economic illiteracy, as subsidised green jobs simply destroy wealth creating jobs elsewhere in the economy.

In any event, these green jobs never seem to materialise. For instance, the Scottish Government’s Low Carbon Economic strategy (2010) promised 130,000 green jobs by now. but according to a study by the Scottish TUC last year, Broken Promises and Offshore Jobs, the actual number is 21,400, and falling. Their case study on the massive Moray offshore wind farm under construction shows just why the jobs have not appeared:

100 turbines off the coast of Caithness are being built by a consortium involving Portugal’s main energy firm EDPR, French utility Engie and Diamond Generating Europe, a subsidiary of Japanese firm Mitsubishi Corporation. The blades are being built by Danish company, MHI Vestas Offshore Wind – a joint venture between Vestas Wind Systems and Mitsubishi Heavy Industries. MHI Vestas have a plant in the Isle of Wight that employs 300 people. Under the previous ownership of Vestas the Isle of Wight plant was closed in 2009, leading to the loss 425 jobs (and a high profile 18 day blockade by workers and activists).
The wind turbine jackets are being handled by a ‘first tier’ Belgian procurement contractor called Deme. Deme awarded the contract for 45 jackets to Lamprell – a company in the United Arab Emirates. Lamprell made a $98m  loss on its contract for 60 jackets for Scottish Power Renewables, developer of the East Anglia One wind array, suggesting it does not have a great track record in wind turbine jackets.

In short most of the manufacturing work is offshored, and all revenues will be paid out to foreign companies. Scottish workers will largely be left with maintenance operations. This is a story seen over and over again across the UK.

Far from boosting the economy, this mad rush to decarbonise the economy will stop any recovery dead in its tracks.