The Hornsdale Power Reserve is about to get an upgrade. The Hornsdale Power Reserve is a grid-sized battery build by Tesla in South Australia. It has a capacity of 100 MW and can deliver 129 MWh. I did a series on it back in March, starting with the claim that this battery could replace natural gas for peaking and gap-filling (which is not the case). The upgrade will add a capacity of 50 MW and it can deliver 64.5 MWh.

The pv-magazine article points out that the additional capacity will be put to use for frequency control and inertia. I could understand that, the main function of the original 100 MW battery is already frequency control and this service generated quite some money for its owner. There was also this claim (my emphasis):

ARENA, which contributed an AU$8 million grant toward the expansion, also believes the upgraded battery could also help to reduce renewable curtailment in South Australia. Indeed, AEMO’s Chief System Design and Engineering Officer, Alex Wonhas, said that the expansion enabled the “optimal use of this world leading battery to support higher levels of renewable integration.”

The author also didn’t shy away from using terms like “mega” and “highly successful” in the article. That all sounds very promising, but from looking into the Hornsdale Power Reserve while writing the earlier series, I think it is presented way nicer than it actually is. Even a “mega”-battery of 100 MW / 129 MWh is still tiny grid-wise and adding another 50 MW / 64.5 MWh will probably not make much of a difference.

This made me wonder: what is the current share of the battery in the South Australia grid? And what difference would this upgrade make once it gets online (the homepage of the Hornsdale website states that the expansion is still “under construction”)?

Time to look at the data.

The Australian Energy Market Operator (AEMO) has a data dashboard overseeing the fuel mix in Australia, also that of South Australia. This was the situation on that dashboard a few days ago when I started writing this post:

There was no solar production (the sun was already set in South Australia at that time) and there was also no wind. The reaction of the battery on this lack of solar and wind was underwhelming: it discharges equal to a capacity of 3 MW. That is only a very small fraction of its total capacity and an even smaller fraction of what was needed. Natural gas generated nearly all of the electricity at this specific moment.

Okay, this is just a snapshot in time, probably an interval of probably just a few minutes. Luckily, it is also possible to download hourly, daily and weekly data.
This is for example the hourly data (collected over several days):

This is a very interesting graph. There are huge fluctuations of electricity generation by solar and wind. The reaction of the battery to the huge drops was again rather underwhelming, but even if the battery would have discharged its complete load to the grid at once, it would hardly make a dent and wouldn’t last for long (there are two 10+ hours drops). There is some limited output of the battery during the morning peak and/or evening peak. If there is such a limited output, then there is not much room for reducing renewable curtailment and these fluctuations will only become larger when South Australia advances on its path towards 100% renewable energy.

This is daily data of the last three months: 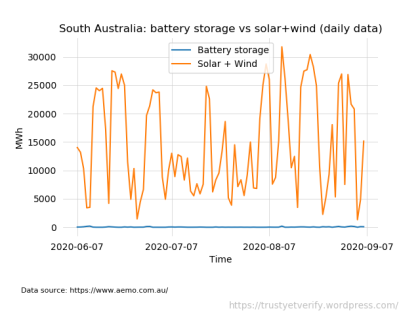 This is weekly data of the last year: 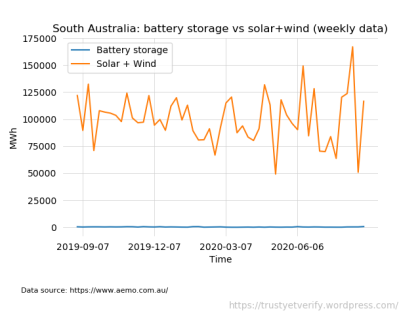 These all tell the same story, the average output of the current batteries is less than 1% (0.24% → 0.80%) of average output of the solar and wind. That doesn’t promise much capacity for absorbing energy that would otherwise be curtailed. Adding 50 MW to the system will not make much of a difference in that regard. The only that this battery can do, even when upgraded, is a very superficial skimming off peaks.

This output is not only from the Hornsdale Power Reserve. Currently, there are three grid-sized batteries in South Australia. The Hornsdale reserve (100 MW / 129 MWh), the Dalrymple substation on South Australia’s Yorke Peninsula (30 MW / 8 MWh) and the battery of the Lake Bonney wind farm (25 MW / 52 MWh). This is a total capacity of 155 MW. Adding 50 MW would amount to 205 MW. Recalculating the current output for a capacity of 205 MW instead of 155 MW gives:

I leave it to the reader to decide whether there is a significant difference between the two [tip: it might be necessary to (strongly) zoom in].

The function of the Hornsdale Power Reserve is mainly frequency control and inertia. The need for such services is in fact the result of adding more intermittent energy sources to the grid in the first place, but maybe that is what the article was hinting at? Whatever the case, the capacity of the Hornsdale Power Reserve is minuscule compared to the output of solar and wind, so it seems very unlikely that this battery itself will make a significant difference.