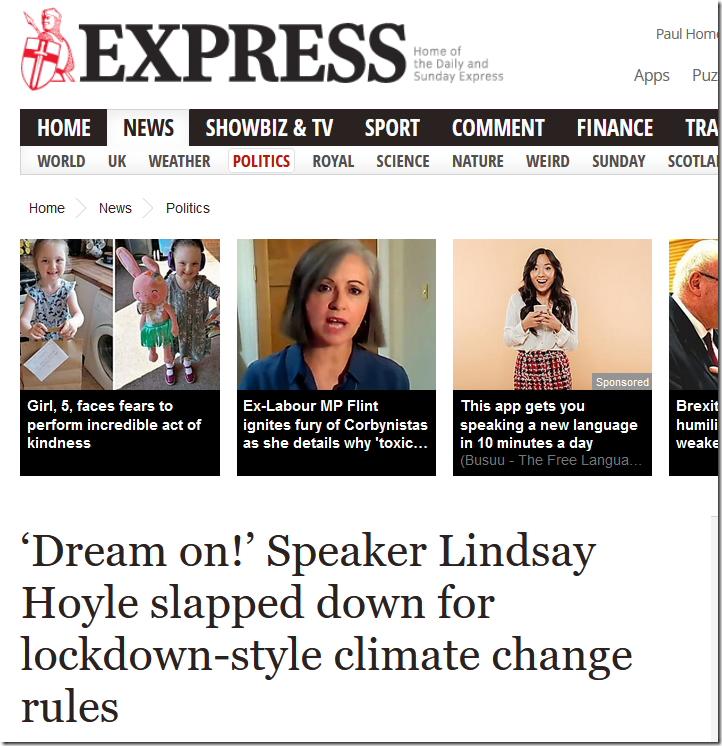 THE TYPE of restrictions on daily life introduced to fight coronavirus could command public support if brought in to tackle the threat of climate change, the Speak of the House of Commons has suggested.

Sir Lindsay Hoyle told a gathering of counterparts from some of the world’s most powerful countries that the pandemic shows people are prepared to accept limitations on their lifestyles – if they recognise it is for the greater good.

He was surprised by the willingness of millions of people to wear masks and accept new rules, and said the urgent response the world has shown to deal with Covid-19 should now be harnessed to address climate change.

Speaking online at the G7 Speakers’ Meeting, he said: “If one lesson from the pandemic is that taking serious action in a timely manner is key – then shouldn’t this also be true in terms of climate change? With Covid, what surprised many of us in the UK was how engaged most of the population became once the seriousness of the situation was made clear.

“People were prepared to accept limitations on personal choice and lifestyle – for the good of their own family and friends. No-one could ever imagine that we would be wearing masks so readily and that we would all be so compliant. Perhaps we ought not to underestimate the ability of people and communities to work together for the common good, if there is united and clear leadership.”

The prospect of coronavirus-style restrictions being introduced to save the environment alarmed a leading Conservative critic of the measures.

Sir Desmond Swayne, the Tory MP for New Forest West and a former international development minister, said: “My immediate reaction is: Dream on. I think people have had quite enough.

The conference at which Sir Lindsay made his remarks was hosted by one of the most powerful figures in US politics, Nancy Pelosi, Speaker of the US House of Representatives.

Sir Lindsay said it was “sobering to face the reality that the people and nations who benefited least from rapid development and growth were those most adversely affected by the impact of climate change”.

The Speaker argued that “the tragedy is that unlike the pandemic, the climate crisis is not simply an external threat, but one in which we have had a clear hand”.

He said: “In other words, it seems that we have brought this on ourselves. While this is again sobering, surely, it is in our hands to rescue it, if we have got the will to do it?

“The situation is not just far away, but also close to home – as we in the UK saw in February, when we experienced the ‘wettest month on record’ with some of the worst flooding we have known. Our conversation, and the power of our voices together is important, because it is beyond time to do something about this.”

It is hard to know where to start with this authoritarian nonsense from the Speaker, who has always seemed to be a common sense type of bloke.

The public have only knuckled down through lockdown, because they believed their lives were at risk. Apart from a few nutters, nobody seriously believes that about climate change.

But more importantly, restrictions on life here won’t make the slightest difference to either our climate or the world’s, even if it was a threat.

Sorry, Mr Hoyle, you may think we are all sheep, but I can assure you the British public are not that stupid.

He makes two statements which underline how badly he understands the issue of climate change.

1) It was “sobering to face the reality that the people and nations who benefited least from rapid development and growth were those most adversely affected by the impact of climate change”.

This merely proves that developing countries need economic growth, as it will help protect them from bad weather. Degrowth helps nobody.

2) The situation is not just far away, but also close to home – as we in the UK saw in February, when we experienced the ‘wettest month on record”

Except it was not the “wettest month”, it was only the 38th wettest. By far the wettest was October 1903, which recorded 29% more rain than February 2020.

We survived bad weather back then, without restriction personal liberty, and we will do so again.