STT promotes nuclear power because it works: safe, affordable and reliable it’s the perfect foil for those obsessed about carbon dioxide gas – because it doesn’t generate any, while generating power on demand – unlike the unreliables, wind and solar.

One of the feeble ‘arguments’ against it, is that nuclear power plants are of such vast scale that they take longer to build than the pyramids of Giza, and cost twice as much.

That argument has been given short shrift in the US, where NuScale has just won approval for one its small modular reactor’s designs, with big implications for power generation in the future.

BOISE, Idaho (AP) — U.S. officials have for the first time approved a design for a small commercial nuclear reactor, and a Utah energy cooperative wants to build 12 of them in Idaho.

The small reactors can produce about 60 megawatts of energy, or enough to power more than 50,000 homes. The proposed project includes 12 small modular reactors. The first would be built in 2029, with the rest in 2030.

NuScale says the reactors have advanced safety features, including self-cooling and automatic shutdown.

“This is a significant milestone not only for NuScale, but also for the entire U.S. nuclear sector and the other advanced nuclear technologies that will follow,” said NuScale Chairman and Chief Executive Officer John Hopkins in a statement.

Utah Associated Municipal Power Systems already has agreements with the Energy Department to build the reactors at the federal agency’s 890-square-mile (2,300-square-kilometer) site that includes the Idaho National Laboratory, a nuclear research facility that would help with the development of the reactors.

The Department of Energy has spent more than $400 million since 2014 to hasten the development of the small modular reactors, or SMRs.

“DOE is proud to support the licensing and development of NuScale’s Power Module and other SMR technologies that have the potential to bring clean and reliable power to areas never thought possible by nuclear reactors in the U.S., and soon the world,” said Rita Baranwal, assistant secretary for Nuclear Energy.

The energy cooperative has embarked on a plan called the Carbon Free Power Project that aims to supply carbon-free energy to its nearly 50 members, mostly municipalities, in six Western states. The company plans to buy the reactors from NuScale, then assemble them in Idaho. The company is also looking to bring on other utilities that would use the power generated by the reactors.

Cooperative “members themselves would use a portion of the electricity, but other utilities would become involved and purchase power,” said LaVarr Webb, spokesman for the cooperative.

He said not all the power that will be produced from the proposed reactors has been allocated, but he expects more interest with the U.S. approval of NuScale’s design.

He said the next step is for the cooperative to submit a combined construction and operating license application to the Nuclear Regulatory Commission. The process also includes an environmental analysis. Webb said the cooperative will likely have that ready within two years.

The first small modular reactor is scheduled to come online in 2029, with 11 more to follow in 2030.

The Nuclear Regulatory Commission’s approval of the design means the agency is satisfied such technology will work properly.

The modular reactors are also part of a much larger U.S. plan to replace current reactors, many of them decades old, with more efficient and safer reactors. U.S. officials say nuclear power helps reduce carbon emissions from coal and natural gas, a cause of global warming.

There are currently 95 licensed commercial nuclear reactors operating in the U.S., generating about 20 percent of the nation’s energy, according to the Nuclear Regulatory Commission.

The Utah Taxpayers Association has come out against Utah Associated Municipal Power Systems building the reactors, contending costs will soar as they have with some traditional reactors that are much larger.

But the cooperative says such a comparison is unfair, and akin to comparing a 1960s gas guzzler automobile with a modern electric vehicle.
AP News 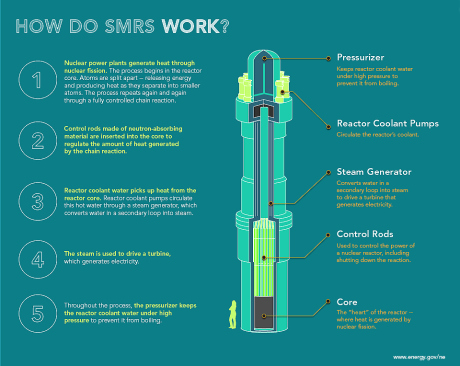