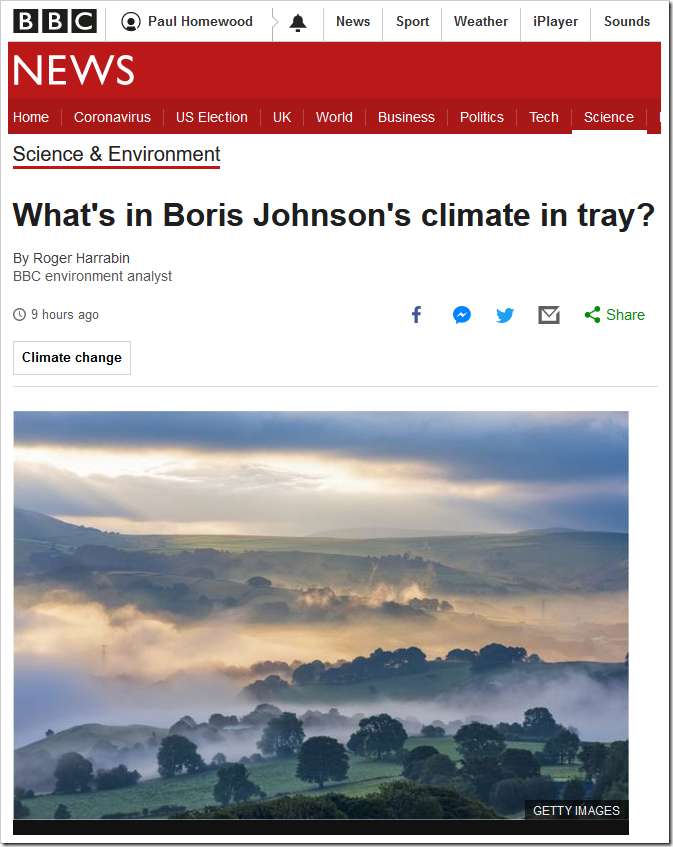 A huge breakthrough in climate policy was signalled this week when China announced it will reduce its emissions to net zero by 2060.

It’s a potentially game-changing leap, following in the footsteps of the UK’s existing 2050 net zero target.

But promises are easy, actions are more challenging – and the UK has been steadily slipping from its climate targets.

It’s consistently promised tougher policies for the future, but for a few years, Britain’s long-term climate strategy has lain buried in fog.

We know the net zero carbon destination point, but we can’t yet see how the government intends to get there.

At last, in a contribution to the UN General Assembly (UNGA) on Thursday, the prime minister did briefly illuminate several paths towards carbon Nirvana.

But they’re only tantalising pointers to the direction of travel, when a full, clear properly funded roadmap is urgently needed.

In previous years, climate policy was typically held up in different government departments.

But environmentalists say key policies are now stuck in a Downing Street logjam awaiting sign-off from the prime minister himself.

It prompts John Sauven from Greenpeace to plead: "Some of the ideas the government is proposing are really impressive – but the prime minister needs to resolve disputes within government on environmental policies. Now is the time for him to lead."

A huge breakthrough in climate policy was signalled this week when China announced it will reduce its emissions to net zero by 2060.

China have said nothing of the sort, simply that it is an aim.

Harrabin goes on to complain that the government have not laid our a detailed roadmap of how they will achieve Net Zero, conveniently ignoring the fact that China have not either, nor just about every other country in the world.

He then reproduces the usual list of options, without daring to mention how horrifically expensive they all are.

He claims that offshore wind no longer needs subsidy, but if this was so energy companies would be queuing up to build them without waiting for Contracts for Difference.

Notably however he does acknowledge that hydrogen solutions “look expensive”.

Harrabin reveals his green bias with his comments about the dismay of some green campaigners regarding nuclear power. If they/he were so concerned about global warming, they would embrace nuclear.

It is high time the public were told the truth about how much they will have to pay for the climate agenda. They deserve better than the torrent of eco-propaganda they get from the BBC.