Are the Met Office afraid of the truth? 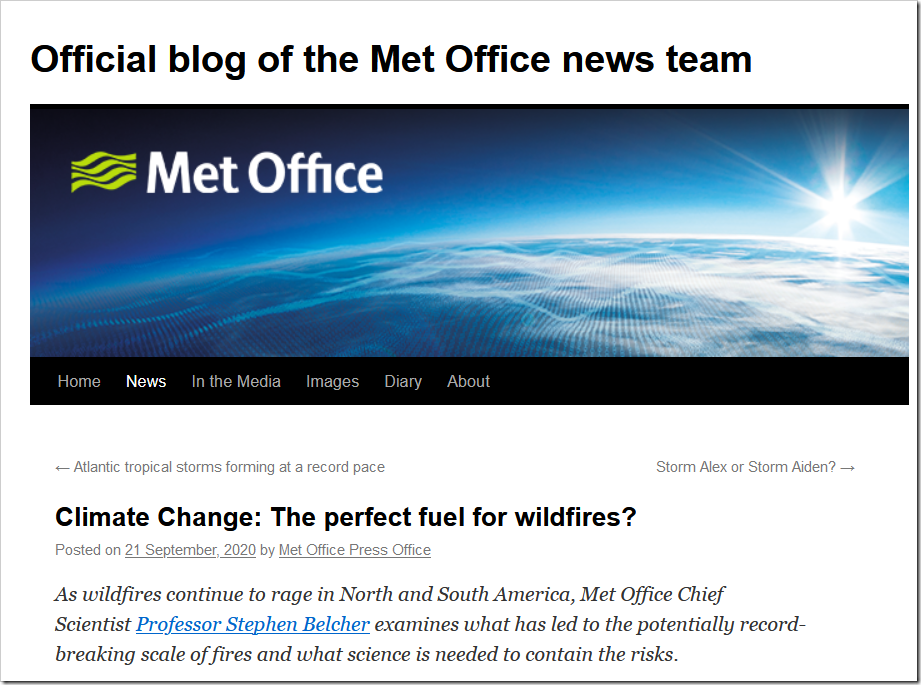 Last year wildfires ravaged Australia. This year has seen reports of extensive fires in the Amazon, in California, and earlier this year during the hot spell, also in the UK. Even the area within the Arctic Circle is experiencing an extraordinary fire season, with thawing permafrost exposing large areas of carbon-rich peatlands, acting as additional fuel and a huge new source of greenhouse gas emissions. And it’s not just that we are seeing more in the news about wildfires, data shows the number of fires is increasing. By May this year, the number of wildfires recorded in South America was already higher than in any previous year since systematic monitoring began in 1998. And since the early 1970s, California’s annual wildfire extent has increased fivefold.

Wildfires are more severe during extended periods of hot dry weather, because higher temperatures cause more evaporation and that dries the vegetation, creating fuel for the fires. For example, last year, Australia saw very hot, dry, conditions caused by a pattern of temperatures in the Indian Ocean, known as the in Indian Ocean Dipole. The Indian Ocean Dipole is a natural fluctuation in the climate that affects the weather patterns around the world including in Australia, but now this fluctuation is adding onto a world that is warmer because of climate change.

So now that the globally-averaged temperature has risen to more than 1.0°C warmer than in the pre-industrial world, it is not surprising that we are seeing more wildfires around the world. Importantly though, higher temperatures alone will not necessarily lead to more fires. Fuel must be available and there needs to be an ignition source, either by human influence or lightning strikes. Climate change may also lead to wetter conditions in some places, as warmer air can hold more moisture, which can affect fuel availability and flammability.

In January this year, an international group of scientists, including from the Met Office, got together to survey the published scientific evidence and concluded  there is consistent evidence that hot dry weather conditions promoting wildfires are becoming more severe and widespread due to climate change.

So, we are going to continue to experience more wildfires as the climate changes. This is driving a need to provide forecasts that trigger fire prevention to limit accidental fires. At the Met Office we now produce forecasts of a ‘fire severity index’ for England and Wales. And earlier this year, scientists from the Met Office and from CEMADEN and INPE in Brazil, developed a technique to assess the likelihood of high fire conditions across South America during the riskier months of August to October. This is part of a broader move from traditional forecasting of weather into forecasting the impacts of weather.

Last week the Met Office put this item on their blog.

To which I replied:

I wonder what they have got to hide.