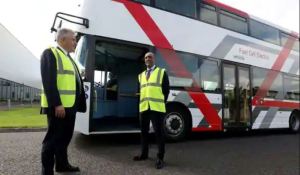 The obvious problem for the imagined ‘hydrogen economy’ is that there isn’t any natural source of hydrogen gas. The viability of using electricity generated only from renewables to convert water into industrial-scale hydrogen supplies is questionable, to put it mildly. Brace for the usual ‘green jobs’ claims having a tendency to be wildly over-optimistic.
– – –
The first zero-emission hydrogen fuel cell-electric double-decker bus has arrived in Aberdeen, reports Route One.

Aberdeen City Council (ACC) says the delivery, part of an £8.3m project funded by ACC, the Scottish Government and the European Union Joint Initiative for Hydrogen Vehicles across Europe (JIVE) project, underlines the city’s role as the ‘energy capital of Europe’ and its commitment to the transition of green energy in a net zero vision.

First Aberdeen is to run the bus on its most popular service routes.

Aberdeen City Council Co-Leader, Counciller Jenny Laing, says: “We are very proud to bring the world’s first hydrogen-powered double-decker buses to Aberdeen as it shows the city continues to be at the forefront of developing green technologies.

“The roll out of the new double-decker buses will help to cement Aberdeen’s position as an entrepreneurial and technological leader as the new buses come with even more advanced technology which pushes established hydrogen boundaries and greatly assists us in tackling air pollution in the city.”

He says: “These buses represent much more than Aberdeen striving to reach a clean air, zero-carbon future. They represent the start of what could be a world-leading hydrogen economy here in Scotland which will bring with it multi-million pound investments and tens of thousands of jobs.

“Not only do our buses hold the title of being the world’s first zero-emission hydrogen fuel-cell double deckers, they emit only water vapour.

“We hope that more councils across the UK follow Aberdeen City Council’s lead.”