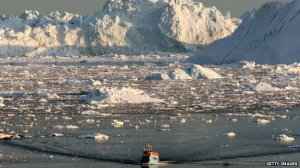 Arctic sea ice doesn’t undergo natural seasonal melting any more — it ‘dies’, according to the latest climate alarm propaganda. But researchers still need an icebreaker to ‘kill’ a bit more of it in order to study its supposed demise.
– – –
An icebreaker carrying scientists on a year-long international effort to study the high Arctic has returned to its home port in Germany carrying a wealth of data that will help researchers better predict climate change in the decades to come, reports AP News.

The RV Polarstern arrived Monday in the North Sea port of Bremerhaven, from where she set off more than a year ago prepared for bitter cold and polar bear encounters — but not for the pandemic lockdowns that almost scuttled the mission half-way through.

“We basically achieved everything we set out to do,” the expedition’s leader, Markus Rex, told The Associated Press by satellite phone as it left the polar circle last week. “We conducted measurements for a whole year with just a short break.”

The ship had to break away from its position in the far north for three weeks in May to pick up supplies and rotate team members after coronavirus restrictions disrupted carefully laid travel plans, but that didn’t cause significant problems to the mission, he said.

“We’re bringing back a trove of data, along with countless samples of ice cores, snow and water,” said Rex, an atmospheric scientist at Germany’s Alfred Wegener Institute for Polar and Ocean Research that organized the expedition.