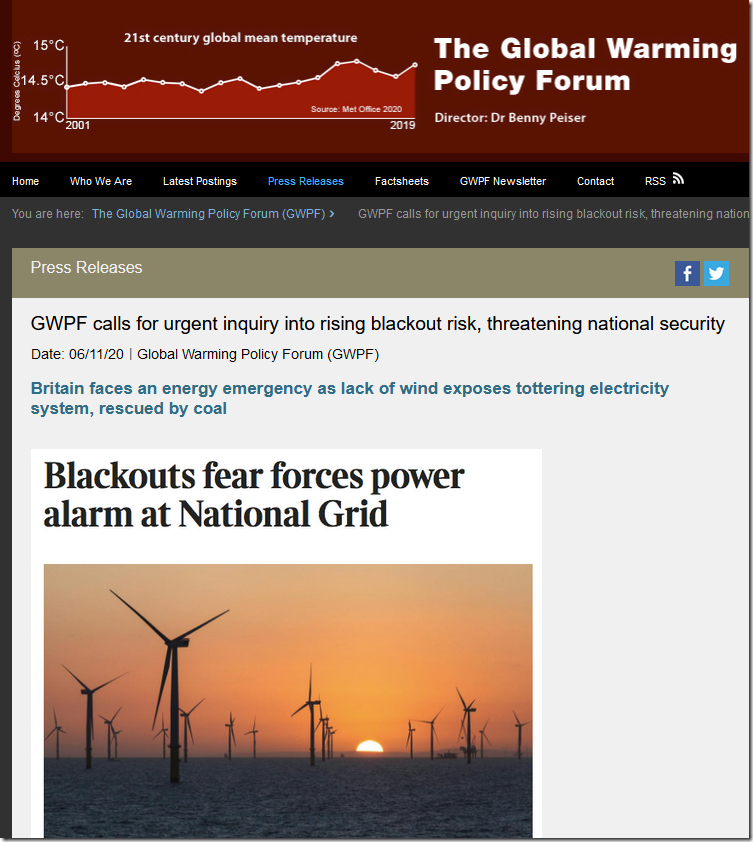 London, 6 November: The Global Warming Policy Forum (GWPF) is today calling on MPs to start an urgent inquiry into the economic and national security implications of the growing fragility of the UK electricity system.

For two days running, (4th and 5th November), National Grid, UK’s Electricity System Operator has issued System Warnings in the form of an Electricity Margin Notice, alerting the markets to a reduced system margin. In large part this is due to low levels of wind power as a result of a very large high pressure system that covers the whole of the UK, bringing the first frosts of the winter.

At peak load on the 4th of November the UK’s entire transmission connected wind fleet of 18,000 MW in capacity was providing a mere 17% of its possible output (3,000 MW).

The last of the UK’s remaining coal plants stepped in and provided over 2,264 MW of generation, alongside other conventional forms of generation. For a government that claims to be “Powering Past Coal” this is deeply embarrassing.

The UK’s electricity sector is now so fragile that a normal weather event causes it to wilt like a hothouse plant left out in the frost, and the prospects for the future are deeply troubling.

Much of the conventional capacity that has been stabilising the system in the last two days, particularly coal, is scheduled for rapid closure in the drive towards Net Zero. This hasty policy has long looked overambitious, it now appears dangerous as well as ruinously expensive.

The government has become a hostage to renewables industry lobbyists, inside and outside Westminster, and will not spontaneously initiate an inquiry into the threat to energy and national security or admit failure. The GWPF is calling for MPs to initiate their own investigation of the perilous state of the United Kingdom’s electricity system.

Amongst the questions that MPs should be asking are:

1) Why was National Grid caught out by the weather, and how much has their mistake cost consumers?

2) How can we quickly pause and unwind the increasingly dangerous reliance on renewables and wind power?

3) Does the UK have to extend the lives of coal and older gas generators in order to limit the risk of security of supply and control consumer costs?

4) Should the UK create a market that delivers a long-term cost-minimisation strategy for electricity?

The engineering of our electricity industry is a national embarrassment, with National Grid sent into a panic by the first mild frosts of winter, and consumer costs at horrific levels. The renewables policy of the last twenty years is to blame and government must now change course.”