It was of course always inevitable: 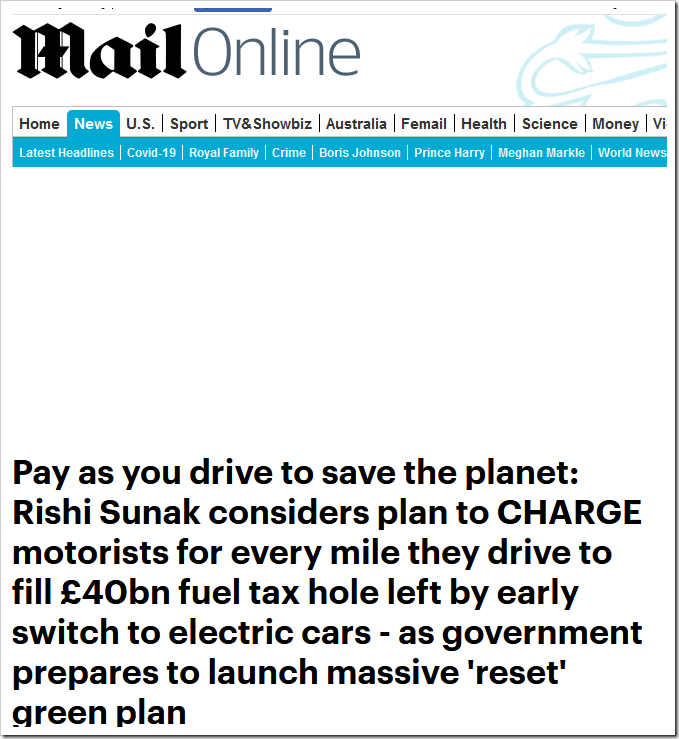 As I have been saying for years, the government would have little choice but to go for road charges to replace the lost fuel tax once EVs took over.

It was always inconceivable that electricity could be taxed in the same way, as it would generate massive energy poverty and would obviously discriminate against poorer non-car households.

Equally to raise £40bn from other taxes would be political suicide.

In my view, road charging could become the equivalent of the next government’s poll tax. In theory of course, it only swaps one tax for another, but so did the poll tax.

One particular consequence is that all cars would pay the same rate, disadvantaging drivers of smaller, more economic cars which would use less fuel.

In any event, it is inevitable that the revenue from road charging would quickly outstrip current revenue from fuel duty. Quite apart from the administrative costs which would need to be recovered, it would be far too tempting to start ratcheting up rates on the flimsiest excuse, such as road congestion.

It is after all the stated aim of climate zealots in Parliament and elsewhere to cut the amount of travel we do in our cars. What better way to do it than make it unaffordable for the average driver to use his car on a regular basis?

Ironically, drivers of electric cars may be put out more than most. Currently freed from paying fuel duty and vehicle excise duty, they will find themselves much worse off, once the cash cow provided by other motorists disappears.

And it’s not even as if their cars are much cheaper to run anyway. According to WhichCar, the cost of recharging a Tesla in the States may be greater than refuelling a petrol car, if done on the Tesla supercharger network.