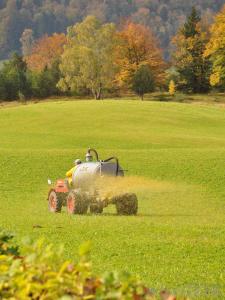 That’s a large chunk of the global food supply in the dock then, according to IPCC-based ‘greenhouse’ climate theories that perform badly in climate models, leading to endless over-prediction of global warming.
– – –
The growing use of nitrogen fertilisers in world food production could put ambitious climate targets out of reach, as it leads to rising levels of nitrous oxide (N2O) in the atmosphere, a new University of Oslo study shows.

Nitrous oxide (N2O) is a highly potent greenhouse gas, and its impact on global warming is 300 times larger than that of carbon dioxide (CO2). Once emitted, N2O remains in the atmosphere for more than 100 years. What’s more – it also depletes the ozone layer.

If left unabated, the emissions resulting from the growing use of nitrogen fertilisers will require bigger reductions in CO2 emissions to reach the goal of the Paris Agreement to keep the global temperature rise this century well below 2°C above pre-industrial levels, according to the study.

The study was recently published in the scientific journal Nature, and was led by Professor Hanqin Tian at Auburn University in the United States. Scientists from 48 research institutions in 14 countries have contributed to the study, whose goal was to produce the most comprehensive assessment to date of all sources and sinks of N2O.

Agriculture accounts for over half of global, human-made N2O emissions

Agriculture accounts for over half of the global human-made N2O emissions, with emissions from this sector growing at a rate of 1.4% per year, according to Glen Peters. He is a research director at CICERO Center for International Climate Research and is one of the authors of the study.

Fertiliser use and manure are also to blame for human-made N2O emissions that are remote from agricultural land, according to Peters.

“Excess nitrogen may be transported to other places through water runoff and atmospheric dispersion, which leads to further nitrous oxide emissions,” he says, adding that these indirect N2O emissions constitute around 15% of the total and are growing at around 1% per year.

Other sources of human-induced N2O emissions include fossil fuel combustion, industrial production of fertilisers and synthetic materials – particularly nylon – wastewater, and biomass burning. Together, these sources account for about 25% of the total, with their emissions increasing at 0.9% per year.

Dramatic rise in N2O emissions over the past few decades

“N2O concentrations in the atmosphere have been stable for thousands of years, but the N2O concentration has risen dramatically over the past few decades and its growth has accelerated over the last ten years due to emissions from various human activities,” says Rona Thompson. She is a senior scientist at NILU – Norwegian Institute for Air Research and is one of the lead authors of the study.

In terms of per capita N2O emissions, the world’s biggest emitters are North America, and Europe, according to the study. N2O emissions are growing fastest in Asia, Africa, and South America, mainly due to increasing use of nitrogen fertiliser.

The highest growth rates for N2O emissions are found in emerging economies, particularly in Brazil, China, and India, where both crop production and livestock numbers have increased.

Europe is the only region in the world that has reduced its N2O emissions over the past two decades. Europe’s cut in N2O emissions is mainly the result of policies aimed to reduce greenhouse gas emissions and air pollution from industry.

A small share of the reduction is due to lower emissions from agriculture, resulting from nitrogen fertilisers being used more efficiently.

Cutting fertiliser use is also good for the environment

Reducing the use of nitrogen fertilisers does not only lead to lower N2O emissions; it is also good for the environment because it results in improved air, soil, and water quality.